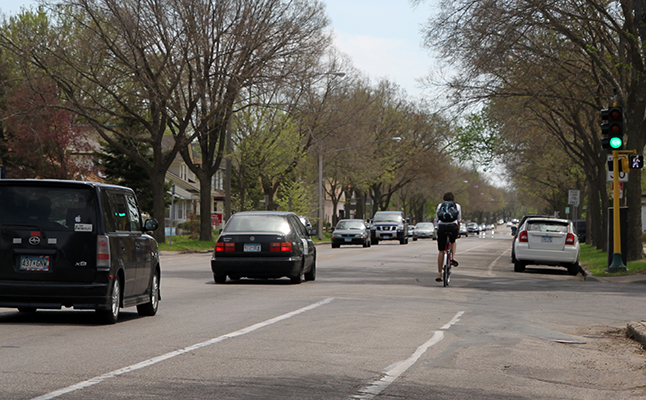 A cyclist uses the bike lane on Minnehaha Avenue. The bike lane runs between moving vehicle traffic and parked cars.

Next year, Hennepin County will begin a two-year long reconstruction project on Minnehaha Avenue for the approximately 2.2 mile stretch from 46th Street South to Lake Street. Many members of the community have strong opinions about what Minnehaha should look like moving into the future, but uncertainty about details and about when and how to provide feedback are leaving some not sure that they can make their voices heard.

Key decisions that will shape Minnehaha Avenue for years to come have already been made, though a larger community-wide meeting has not yet been scheduled. Members of the community are worried that the lack of significant resident engagement at critical points in the project’s development will leave many out of the conversation.

Hennepin County has considered two options for the reconstructed Minnehaha bikeway — cycle tracks or bike lanes — and Hennepin County staff have already decided that they will recommend to the City Council that bike lanes be installed. This recommendation comes in spite of multiple community groups and residents who would like to see a cycle track installed.

Bike lanes are bikeways that run next to vehicular traffic, the current configuration on Minnehaha Avenue. A cycle track is a protected bikeway separated from vehicle traffic by a line of parked cars or a physical change in the roadway.

The debate over these two options is bigger than the Minnehaha reconstruction. It’s part of a larger, city-wide conversation about Minneapolis’ goals for increasing bicyclists and bikeways in the city.

Council Member Cam Gordon explained, “The City is poised to pass a Climate Action Plan that will call for thirty miles of new protected bikeways (also known as cycle tracks) in the next ten years. Minnehaha is a great opportunity to get started on this network with a high-quality facility that will connect to the Grand Rounds trails on Godfrey Parkway and Minnehaha Parkway, and get within blocks of the Midtown Greenway.”

Ethan Fawley, president of the Minneapolis Bicycle Coalition, commented, “Cycle tracks have been shown by a recent study to both be and feel safer than bike lanes. They have also been shown to increase biking by attracting new riders, which in turn increases the safety of each individual bicyclist.”

Proponents of cycle tracks point to several recent studies showing that cycle tracks are safer for cyclists. A recent University of British Columbia study found that cycling in a protected bikeway is five times safer than cycling in a bike lane.

Council Member Cam Gordon said, “I am convinced that standard bike lanes, while they are better than no bicycle facility at all, do not do as much as we can to attract more people to make trips on bike. I think we should be building bikeways that work for everyone: parents with kids, elderly folks, anyone who doesn’t currently feel comfortable riding on the street.”

The Hub Bike Co-op’s Development Coordinator Benjamin Tsai is intrigued by the cycle track option. He commented, “In our customer interactions, some people tell us that they are still uncomfortable biking on the street and for these cyclists, a cycle track would be a good option. I know it is a new kind of infrastructure and they would need to have signage dialed in, but it could be a really neat transit way to the park for people.”

Residents in Favor of Cycle Tracks

Area residents appear to agree. Gordon said, “I have heard from many greater Longfellow residents that they are excited about the possibility of cycle tracks on Minnehaha.”

Fawley also commented, “A majority of the community wants a cycle track.” Additional support for cycle tracks can be found in the reader comments section of an article on My Broadsheet detailing the differences between a cycle track or bike lane. All commenters were in favor of the cycle track because of its increased safety.

Actual and perceived safety are not the only benefit of cycle tracks, according to supporters. They point to evidence that shows that bicycle-friendly routes bring with them increased economic development. The New York Department of Transportation reported that when they provided a protected bike lane for cyclists, retail businesses along the route saw an increase of up to 49% in sales.

Jill Naylor, co-chair of the Longfellow Community Council’s Environment and Transportation Committee, explained, “The inclusion of a cycle track will attract more casual riders. the ones that are more like to stop for a coffee or to look in the shop. It becomes a destination street and a neighborhood street.”

Cycle tracks do have shortcomings, the primary issue being intersections. If cyclists are off-set from vehicular traffic, cars may be less likely to see them as they turn at an intersection.

The orientation of intersections at Minnehaha Avenue — not directly perpendicular, but slightly skewed —raises concern that the intersections will be more dangerous for cyclists.

“One of the concerns I have heard expressed about cycle tracks has to do with the skew of Minnehaha,” explained Council Member Gordon. “After looking into this I discovered that several other U.S. cities have installed highly successful cycle tracks on roads with angled intersections. Washington, D.C. has put cycle tracks on Pennsylvania Avenue and 15th Street, both of which have angled intersections. Seattle is designing a cycle track right now on a skewed street with significant hills that will also feature a streetcar, and those plans have been shared with Hennepin County. It is absolutely possible to build a safe, high-quality cycle track on Minnehaha Avenue, using existing national best practices.” 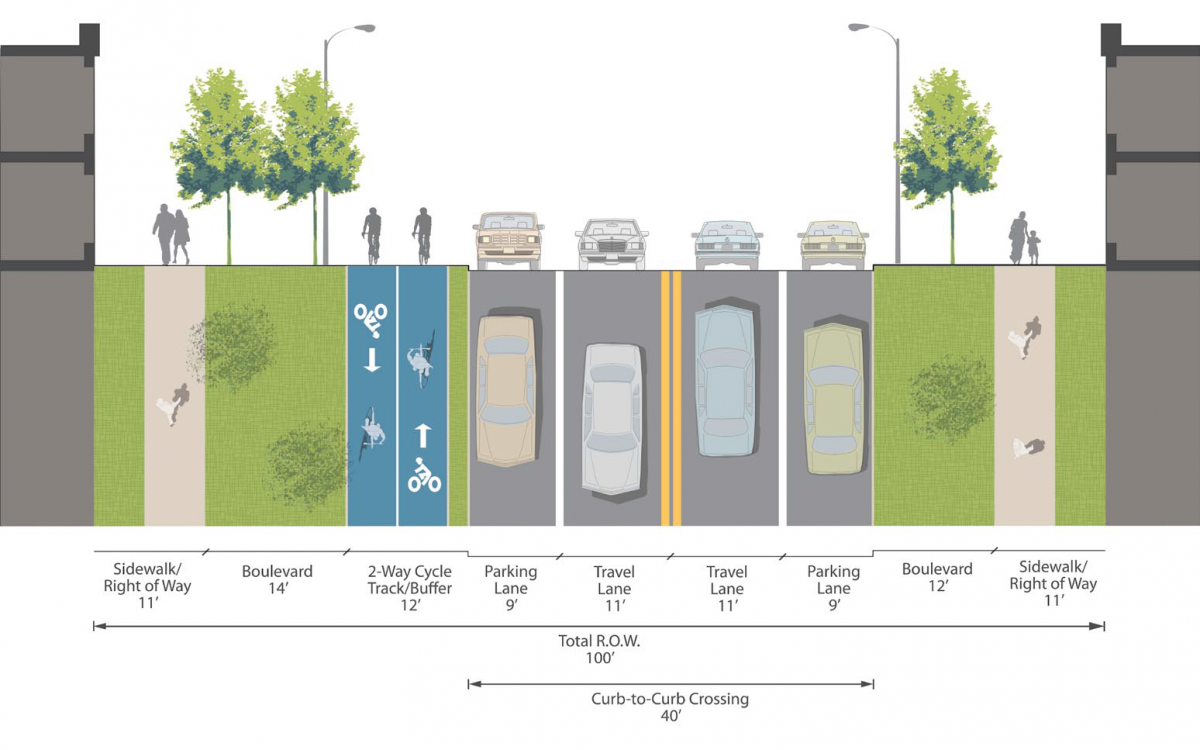 The Minneapolis Bicycle Coalition created a draft of what the proposed cycle track would look like on Minnehaha Avenue. (Image courtesy of Chrissy Lee and Matthew Bachler, Minneapolis Bike Coalition volunteers)

Supporters of the Track

Despite the number of supporters, Hennepin County Project Manager Kristy Morter said in an email that staff have decided that they will recommend to the city that bike lanes be installed due to concerns about intersection safety, multi-modal safety, parking impacts, tree impacts, and maintenance responsibilities. These recommendations will go to the city, and the City Council will vote to approve the plan, using the recommendation of the County and community input to make their final decision.

Despite this recommendation, the Bicycle Coalition will continue to work for cycle tracks on Minnehaha. “It is the right decision,” said Fawley. “A majority of the community wants a cycle track. A cycle track on Minnehaha will also help support local businesses and provide a direct link between the Midtown Greenway to the Minnehaha Parkway and Godfrey Parkway trails. This is a once-in-a-generation opportunity that we cannot afford to miss.”

Naylor of the Environment and Transportation Committee said, “We will actively promote the [County’s] community meeting that may be happening in June. However, it keeps getting pushed back. Our hope is the county will listen and incorporate the cycle track principles and not just go through the motions to get to a predetermined outcome.”