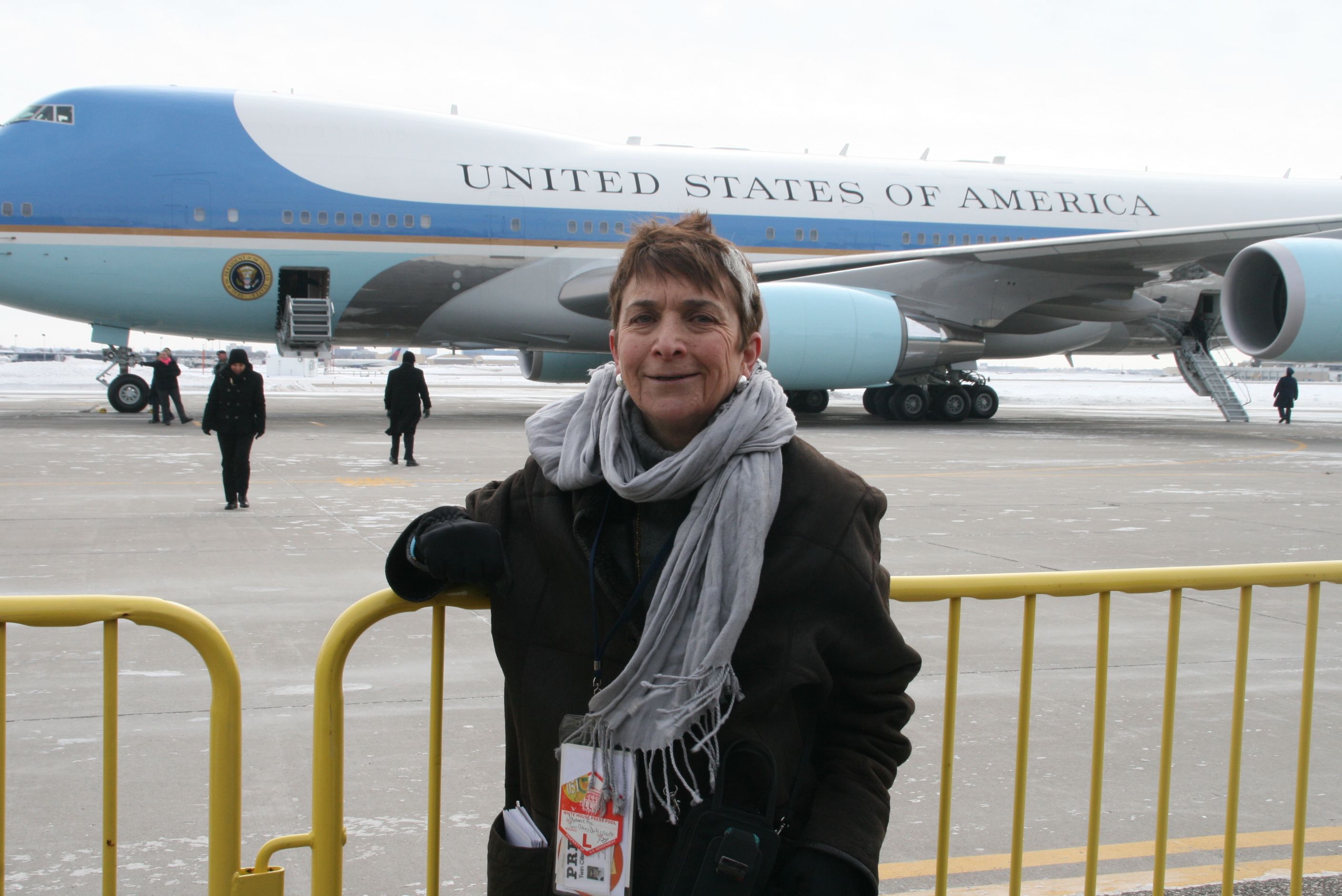 I got the notice from my editor at the Twin Cities Daily Planet on Monday. It said, in essence, “Hey! Anyone want to cover the Air Force One arrival at the airport?” The President of the United States was scheduled to land at 12:50 pm, February 26, and I could have an invitation to see it.

For reporters, especially freelancers like me who take whatever assignments they can get, this seemed like a gift. It’s not quite being in the pressroom, able to yell questions at the President, but it was something.

I arrived at 11:50 am to check in at the Visitor Control Center, a low red brick building at the Minneapolis Air Reserve Station. Inside, a pleasant woman, seated behind bulletproof glass, checked my ID and handed me special event pass, number 11944. POTUS it said at the bottom. More reporters arrived. Twin City Daily Planet was on the list, just under the Associated Press. The Pioneer Press and the Strib were there, as were all the local television stations and the Minnesota Daily. There was a large, yellow rubber ducky sitting above a camera in the room.

Shannon McKay, a civilian photographer with the Air Force, had volunteered to be our handler. We followed her in our cars, first to a warm waiting room with hot coffee and cold snacks and then to a parking lot at the actual staging area, a chilly airplane hanger. The lot by the hanger had needed to be cleared of snow and ice, she said, and apparently other things as well. “Sorry,” she said, apologizing, “But, the bomb squad had to check things out first.”

At the hanger, members of the Secret Service had us empty our pockets (mine contained a dog biscuit) and had us test our cameras. One ran a wand around our bodies before letting us go further into the hanger. There was no coffee but at least there were bathrooms.

We hung around and chatted while we waited. Things were running a little late because of the stiff winds outside. Most everyone except me had come dressed in thermal layers, hats, earmuffs and scarves. My mad bomber hat had been forgotten, left back home on the dining room table. “Put something on your head,” McKay scolded me.

“I have extra. Do you want a this little hat or a warm fuzzy one?” she asked. I took the little one. It covered my ears. She tossed a scarf at me, smiling. “Wear this,” she said. She saved my life. The wind chill was -14º.

Except for a young photographer from the Minnesota Daily, most of the 20 or so reporters were older than 50, most with years of experience. But there seemed to be a general feeling of excitement in the room. McKay signaled us when it was time to go outside on to the runway. Secret Service, White House staff members without gloves and a few Air Force Officers followed us.

One of the photographers spotted the President’s plane as it touched down. “There is it!” Click, click, click. I hid behind a large reporter to get out of the wind, popping out to take photos. I couldn’t feel my fingers.

It took about five minutes for Air Force One to taxi to the hanger. It rolled down the otherwise empty runway to a spot about 35 yards from where we stood and stopped. Stairs were wheeled up to the door of plane as a fleet of 20 or more black limos, SUVs, cop cars and an ambulance pulled up along side the plane. A small group of reporters who’d been cleared to cover the speech in St. Paul walked across the runway to the vehicle marked ‘press,’ and got in.

Michael Brodkorb, who writes the politics.mn blog, took photos and notes. “I don’t care what political party you support,” he said. “This is a big deal. That’s Air Force One. And there’s the President.”

The door of the airplane opened and the President walked down the steps. It was hard from a distance to tell who’d come with him, but I spotted 5th District Congressman Keith Ellison. No one was wearing coats, just suits. They got into the first limo, the door closed and the motorcade drove off. It was over.

It seemed on one hand to be a non-event. We watched a plane land. Big deal. Obama’s speech on transportation didn’t get much national coverage. The MN GOP sent out a letter to their supporters making fun of Obama’s comment about “spiffy new trains” and attacking the Affordable Care Act and a couple of the reporters who’d stood with me in the cold wrote articles for the next news cycle. The story was on local television and radio reports, but the earth didn’t shake.

Still, it felt like something really eventful had happened. I had seen presidents before. I’d touched fingers with Richard Nixon and seen Jerry Ford give the State of the Union Address while I sat in the House galley. I saw Carter sworn in, saw Reagan in the Inaugural Day motorcade and witnessed Clinton give a speech to the Democratic National Convention. And still, this was thrilling. And, I got a press card that said ‘White House Press Pool.’ What could be cooler than that?

Some people are sports fanatics. Some people follow movie stars. I like politics. I returned the hat and scarf I’d borrowed from Shannon McKay, got in my car and drove the three miles home. I was giddy. I guess I’m a dork, or maybe a wonk, but this was the best day in a long time.

Air Force One and me

The Bloomington Bomb Squad had checked the area, deeming it safe for reporters.

The plane taxis toward the gate.

One group of reporters take photos of the official plane.

Air Force photographer Shannon McKay knows how to dress for the cold. She lent me a hat and scarf.

The President and various dignitaries debark on their way to St. Paul's Union Depot.