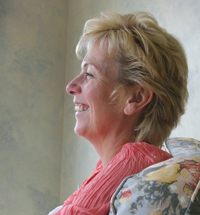 Debra Krueger created a space for prayer and reflection in her home.

“I had to keep my day job, so I got maybe an hour of sleep for months. Normally you’d go a little bit psycho. I didn’t. I prayed for strength, I prayed for wisdom, I prayed for courage, and I was given all of them. And we got out.”

The family lived in a shelter for a short time while forging a new life. Krueger likened the process to being at war—it was that traumatic—and through most of it, she felt very alone. Her newfound faith was often her sole support. “My relation with Christ became very personal, very tangible and real in a way that I cannot deny even to this day,” she said.

Today Krueger attends a Baptist church, but perhaps the most obvious fruit of her vigorous faith, which she says has only deepened over the years, is in her radical business plan. She’s in the process of launching a company, Set Free International, which is designed to help women in poor countries make money by selling their crafts in the United States. Profits from Set Free will be returned to the company; even if the business is a runaway success, Krueger will keep a reasonable cap on her salary.

The company is a labor of love, and more; Krueger says she was inspired to create Set Free by a voice from above—or rather, from within.

“Set Free, although it’s not a religious organization—it isn’t, it’s a business—it is the outflowing of my identity, my purpose, my joy,” she said. “But it’s a business.”

Do business and do good
Krueger is a successful businesswoman. She started her own marketing company, Market Connections, eight years ago—the day after she left the last of three corporate jobs where she faced debilitating harassment and discrimination. Her largest client is Heinz (as in ketchup); she has 11 employees.

Under the umbrella of Market Connections there are a few other businesses: the majority of Krueger’s employees work for Heinz Dispensing Connection, which sells and troubleshoots Heinz dispensing equipment; there’s also a book publishing business, which last year published Krueger’s first work, Defining Moments: A trilogy of hope.

It’s partly on the success of this book that Set Free International rests. Profits from the sale of the book go toward launching Set Free, as will the rest of the profits from Market Connections. So far, Krueger has sold just 500 copies. “What we’re hoping to accomplish is to get the word out to create a community of people … who will watch as we grow Set Free, because they’ll become a part of it,” she said.

Set Free International is not just another business, says Krueger; the model she’s created is unique and untested on several fronts. One of her key strategies is to shift women’s handiwork from sidelined import curiosity shops to upscale mainstream stores by treating the pieces more like art, where each item is of limited quantity and signed by the artist. The buyer will also receive personal information about the woman who made the piece. Krueger’s also counting on her own marketing acumen to get the right pieces to the right stores and to advise the craftswomen on what type of item would sell well in upscale U.S. markets.

Krueger’s status as a business owner is critical to the success of Set Free, she explained, because she’ll use the infrastructure she’s built for Market Connections to run Set Free.

“All the logistics of bringing in product, shipping out product, billing, collecting—all of that logistics we now have in place,” she said. “So that when we get products from Ghana or Haiti or Thailand, we can input products in the system, ship to various locations, bill and invoice.”

“Everything we do is based on [Set Free] as a part of the total vision,” she added.

Inspired to act
In her book, Krueger describes the moment several years ago that inspired her to create Set Free.

“Immediately within my spirit I heard the sound of hundreds of women crying. All the cries were different, each layered on top of each other. They were women, not men,” she remembered.

At the time, Krueger was in turmoil at her job and seeking a way out. The cries were the last thing she wanted to hear—she wanted solace and comfort, not a mystery or a task—and she had no idea what they meant or what to do about them.

“I understood that I could choose very freely to respond to those cries or not,” she recalled. “It was completely my choice. [But] I knew that those cries were just as much mine—how do you ignore that then? How do I ignore them and sleep? And have any sense of self? So I said, ‘All right, all right, okay. But can’t I just have rest for a while?’ And that’s when everything fell into place.”

She left the difficult job and went into business for herself; her former employers hired her on a contract basis when they realized they needed her expertise. That part of the puzzle was solved, but it would be two years before she understood what to do about the women’s cries.

Then one day she read a news article about the ripple effects of Sept. 11, 2001; the article focused on a group of Chilean women who’d lost a contract for their hand-knit scarves.

“These women had a contract with a marketing firm that was in the Twin Towers,” said Krueger. “They had been buying food for their children based on credit that they would get this contract. … When the towers went down, the contract went away. The article said, ‘And the women cried.’

“I said to myself, ‘That is just unbelievable.’ [These women] weren’t going to be able to feed their kids anymore simply because they didn’t have what I could give them. And I thought, ‘That’s really dumb.’”

It has taken several years, but Krueger is poised to fulfill her dream of helping other women achieve self-sufficiency: she plans to launch Set Free International in 2007 with products from Haiti. She dreams of success beyond the business, however. She also wants to establish an art center where the crafts will be on display. She wants consumers to feel connected to the women who make the crafts they buy—something Krueger believes is becoming more essential in the marketplace.

“I think the world is moving toward a day when this is the norm,” she said. “I think the day is coming. I just want this model to create a discussion.”