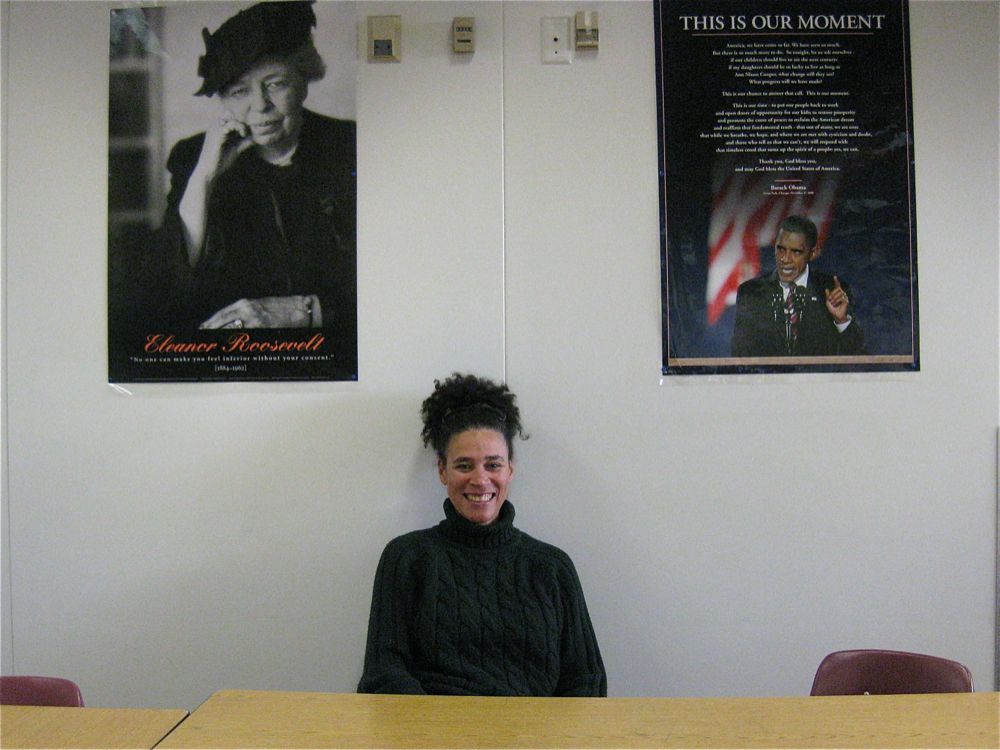 Central High teacher Karen Palmen sits between her heroine and her hero.

It isn’t because she’s black that St. Paul Central High English teacher Karen Palmen is an effective teacher for her African American students. She can tell her color matters to them, though.

“There’s a sense of ease. There’s an expectation that, ‘Oh, okay. She’ll understand me.’ You can feel it. You can see it in their eyes,” she said.

“White teachers can achieve that same sense of relaxation in the students, but it may take some time,” Palmen said. “Especially with our African American children, there’s no wasted time if they see an African American teacher.”

This is part one in a two-part series exploring why there are so few teachers of color in Twin Cities schools. See part two: Affirmative action for teachers: Too controversial for Minnesota nice?

Palmen’s experience growing up was likely more similar to that of her white students than to many of her African American students. She was raised in a white family.

“What [students] don’t understand is that what they’re experiencing is a teacher that’s been trained to work in an urban setting,” she said. “Their assumption of me is one thing, but the reality is I’m a well-trained teacher who sees the needs of all students.”

“It was the very first time in Mikaela’s life where anybody of authority would just talk naturally, without it being a big deal, about her hair,” Bradley said. “It made a profound impact on Mikaela that she is perfectly natural.”

“When she has a teacher of color, she gets to see herself fully embodied, which is a rarity,” she said.

Where are the teachers?

Minneapolis and St. Paul district human resources officials say they want more teachers of color, but race doesn’t trump credentials. For now, too few people of color are making it through Minnesota’s education pipeline into the classroom.

The ultimate solution would be nothing short of closing the achievement gap. The problem’s roots are embedded in the same web of economic, historical and cultural issues that cause the gap in standardized test scores and graduation rates between white and non-white Minnesota students.

A few alternative solutions may be too controversial to gain widespread support.

First step, make it out of high school

“Minneapolis is very, very interested in making sure our staff, also, is representative of the students and communities we serve,” said Minneapolis Public Schools human resources director Richard Kreyer. “If we have equally qualified candidates, we will certainly give a nod to diversity.”

“We’d like to see a bigger pipeline,” he added.

Minnesota’s teacher pipeline narrows as early as third grade, when 20 percent fewer students of color met state reading standards last year, compared to white students. To become a teacher, Minnesota students must first make it out of high schools where overall 45 percent of non-white students did not graduate on time.

State Representative and director of Minnesota Minority Education Partnership Carlos Mariani said, “We hear these constant stories from young people that we interact with, ‘I want to be a teacher.’ When we interact with them deeper, we find out, my god, you’re three grade levels behind, and you’re in high school.”

One St. Paul initiative is aimed at students just beginning to contemplate a teaching career. The union-sponsored Future Teachers of St. Paul at Como High connects the diverse student body with teacher mentors and teaching experiences. It’s new last year, though, so it has not had time yet to produce any teachers.

Mariani questioned, “Does teaching become a lucrative enough, rewarding enough career for low income kids that are going to spend a lot of money to go to college?”

Many of the districts’ teachers grew up in a generation when Minnesota classrooms were much whiter than they are now. Over the last 20 years, the proportion of non-white students in both districts has increased. (Surprisingly, in Minneapolis the proportion decreased over the last 10 years. See sidebar for more on the data.)

In the last decade many families left urban district schools for charters or suburban schools. The newest teachers, including many teachers of color, were laid off.

Generational differences and layoffs don’t explain the whole gap, though.

Minnesota universities continue to produce proportionally fewer teachers of color than K-12 student demographics would predict. In the past two years, according to the Minnesota Board of Teaching, approximately 13 percent of Minnesota students who took the teacher’s licensure test were not white. Statewide, 26 percent of students were not white.

Also disconcerting, many of the teachers of color who took the test didn’t pass. Teachers must pass basic skills tests in math, reading and writing to get a license. In the last two years, 75 percent of all test takers passed the basic math test. Only 26 percent of African American testers and 45 percent of Hispanic testers passed. The passage rate of Asian and multiracial testers was comparable to white students.

That gap is wider than it was before the Minnesota Board of Teaching voted to adopt a more challenging licensure test in 2010.

In the ten years before the new test, 92 percent of all math testers passed, compared to 58 percent of African American testers and 70 percent of Hispanic testers.

Changing the test: a tough sell

Palmen, who began serving on the Teaching Board after the new test was adopted, said she’s pushing to change the test. She believes the basic skills tests are the biggest barriers to African Americans entering the classroom.

“Teaching is an art. Teaching is not about a test,” she said. “”It’s appalling when that’s your barrier.”

Making the tests easier is a tough sell to a board that just made them harder.

In 2010, after signing a new contract with the Pearson test corporation, the Board of Teaching reassessed how licensure tests match up with Minnesota standards. They found that the skills tested by the old Praxis test were ones that Minnesota students should have mastered before high school graduation. The new assessment tests skills at a college level. (For 2010 report to the legislature on Praxis testing, see pdf at bottom of article.)

Executive director Karen Balmer said the board is discussing alternative assessments, but to change the level of difficulty would be to go against a recommendation made by a diverse panel of teachers and other stakeholders.

Olson middle school teacher Crystal Ballard moved to the Twin Cities from Detroit, where she passed the Praxis test. She said she doesn’t know if she would have decided to teach here if her test scores hadn’t transferred.

Many of Ballard’s teachers in Detroit were African American. “Part of the reason I stayed was because during my first year of grad school I was really frustrated and depressed because of the culture shock,” she said. “If I feel this way, I couldn’t imagine how the kids felt.”