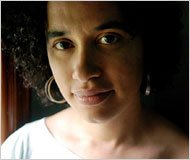 Shannon Gibney, a faculty member at Minneapolis Community and Technical College, is calling foul on her employer. She received a formal reprimand after a group of white male students in her class complained she was personally attacking them in a discussion about structural racism. Gibney recently spoke out in a lengthy interview with City College Air, the college’s student news outlet (video above), about how the experience illustrates deeper problems the college has in terms of its relationship with students and faculty of color.

In the interview, Gibney describes reaction to her discussion of structural racism in a class at MCTC.

“I was in the middle of speaking when I had a young white man in the class interrupt me and ask, ‘Why do we have to talk about this in every class? Why do we have to talk about this?’” According to Gibney, the young man wasn’t calm, and his whole demeanor defensive. “He was taking it personally,” she said, “and I tried to explain, of course, in a reasonable manner, as reasonable as I could, given the fact that I was being interrupted and put on the spot in the middle of class, that this is unfortunately the context of 21st century America.”

Then, according to City College Air, two more white students continued the disruption. “Then there was another white male student near him, who was like, ‘Yeah, I don’t get this either. It’s like people are trying to say that white men are always the villains, the bad guys,’” said Gibney. “I tried to say- ‘You guys are taking it personally- this is… this is not a personal attack- this is not about all white people, you white people in general. We’re talking about whiteness as a system of oppression. And so I’m quite familiar, unfortunately, with how that works and how the institutional structures and powers re-enforce this white male supremacy basically. And that sort of narrative and that way of seeing the world.”

Gibney told the students if they were really upset, they could go to legal affairs and file a racial harassment discrimination complaint, and they did as she said. Soon, Gibney was called into an investigatory meeting with a union representative, a school administrator and the school lawyer, and after that meeting, she received a reprimand from Lois Bollman, the Vice President of Academic Affairs:

“Shannon, I find it troubling that the manner in which you led a discussion on the very important topic of racism alienated two students who may have been most in need of learning about this subject.

“While I believe it was your intention to discuss structural racism generally, it was inappropriate to single out white male students in your class.

“Your actions in tergeting (sic) select students based on their race and gender, caused them embarrassment and created a hostile learning environment. For that reason, I have determined that a reprimand is warranted.”

The formal reprimand will go into Gibney’s file.

Dr. Whitney Harris, the Director of Diversity and Multiculturalism at the college, said in the City College Air video, “we all have a responsibility with dealing with controversial issues of students and faculty- we have to have a way with dealing with those.”

According to Harris, who joined MCTC this summer, one of the new strategies the college is undertaking to tackle diversity is the Education Equity Task Force, which will soon be making recommendations to the administration about what the college should do differently. The task force is looking at various issues such as climate, cultural competency, course offerings and pedagogy, according to Harris.

It’s not the first time Gibney has had run-ins with the administration. In an article in Gawker, Teaching While Black and Blue, Gibney describes how, in 2009, she was in the student newspaper office discussing how they could get more readership. In her Gawker article, Gibney describes what she said:

“I told the students that the staff needs to deal with the fact that this newsroom, and the newspaper in general, has historically been a space where white male experience has been centralized and validated, mostly to the exclusion of all others. I told them that the readership will continue to flag in a school that is more than half students of color, if the editorial staff continues to not represent their interests. In short, they don’t see themselves in the paper because they are not in the paper.”

One of the students, incensed, wrote Gibney an email saying he felt she was being racist, and she replied copying several other people who had been a part of the discussion. The college ultimately sided with the student, saying Gibney had acted inappropriately by forwarding his email to others.

“Gabriel Keith, 23, said he didn’t realize the racist implications of nooses and their connections to lynchings of blacks in the South when he put one up as a joke to get student writers to meet story deadlines. …

“Two black students on the newspaper staff, who discouraged Keith from hanging the noose, filed formal complaints about the incident. The newspaper’s editor, Margaret Campbell, fired him.”

In an email to TC Daily Planet, Gibney stressed the importance of contextualizing what is happening at MCTC “within both a larger national discussion, and the attack on ethnic studies and faculty, admin, and staff of color generally in higher ed,” she said. “I also think these issues absolutely MUST be connected to the abysmal state of students of color at MCTC (especially the student completion rate, given the fact that fully 33% percent of our student body is now of African descent, and we are approaching 60% students of color, overall).”

The MCTC Student Equity Audit, completed by Dr. Joi Lewis, the previous VP of Student Affairs and Chief Diversity Officer before she quit, citing a hostile work environment. Students of color at the school are “less comfortable than their white peers, both inside and outside of the classroom,” the report states. Additionally, students of color don’t “come to MCTC with comparable academic preparedness, and once enrolled at MCTC are not aware of the many resources and support services to assist them obtaining their educational goals.”

“In the 33 Minnesota State Colleges and University Systems, there is no place where people of color are going to be well served as students, faculty, staff or administration,” Gibney said in the City College Air video. “Because the MnSCU system is broken.”

In the City College Air video, Harris declined to comment on the specifics of Gibney’s case, but did comment, “In America you cannot bring people from different races together- and it just goes smoothly. This is the United States where this is an issue. So for us to say we’re going to be the most diverse campus and everybody’s going to sing Kumbaya – no. We’re going to have disagreements because we come from different experiences.”

“I don’t feel safe in the class anymore,” Gibney said. “I feel like I’m a target. I don’t feel like students respect me. Those students were trying to undermine my authority from the get go.”