Over the past 40+ years, most of my attempts at peacemaking, my efforts for justice, my acts of conscience have been derivative; I’ve followed the lead and inspiration of others, content to be a “ [nonviolent] foot soldier for justice”.

The massive Wall Street fraud scandal which destroyed the retirement savings of millions and brought about the total collapse of huge banks, corporations, and even countries has given the term “derivatives” a bad name. In finance, a derivative is the process of gambling on the future value of something and the practice in the 1990s and 2000s where fraudulent and/or toxic mortgages were sliced and diced into small pieces and then bundled together to be sold to other financial firms remains a scandal of herculean proportions and largely ignored by prosecutors by either the Bush or Obama Administration. But it made a tiny percent of hedge fund managers and assorted financial buccaneers obscenely wealthy.

Our society and culture seems to be obsessed with heroes, role models, leaders, and “movers-and-shakers”. We love to point out “who is in charge” and awards, honors, and occasionally wealth are showered on those designated as special or “not like us”. It seems to be a facet of our capitalist culture where we often aspire to bask in the limelight, to be patted on the back, to bolster our reputations, … as a way to rise above others and be noticed – while at the same time lamenting “we have too many chiefs and not enough Indians” or “too many cooks spoil the broth”.

Not everyone has to think the great thoughts, make the strategic plans, direct the operation; there needs to be someone to carry out the orders, to follow the instructions, to do the physical lifting that must be done to accomplish the task or bring the vision to fruition. Martin Luther King said he’d like to be remembered as “a drum major for justice” but even drum majors can’t do their task if there is no one in the band following the directions of that drum major. Too often our society lauds only the drum majors while ignoring the piccolo player because her instrument is so much smaller than the sousaphone or bass drum.

Most of my arrests for acts of civil disobedience and nonviolent resistance have been the result of following the lead and ideas of others. At the White House during the final days of the Vietnam War, my first arrest was precipitated and encouraged by Liz Macalister, a veteran of the anti-war struggle from the Jonah House resistance community that has inspired and provoked many of us over the decades. Sitting beside her in the courtroom for my first trial gave me a wonderful mentor and role model for the path ahead. It was her brother-in-law, Dan Berrigan, whose prophetic witness at Catonsville, MD gave me the courage to burn my draft card and mail the ashes back to my Selective Service office during the years of struggle to end the carnage in Vietnam.

It was Ladon Sheats, a peacemaker extraordinaire who died from cancer nearly 10 years ago, who came up with the idea of taking our prayers for peace to the center of the nuclear madness – the Pantex Plant outside of Amarillo, TX, the final assembly point for all US nuclear weapons – back in 1981. This former IBM executive-on-the-rise became one of the gentlest yet determined peacemakers I’ve ever encountered. 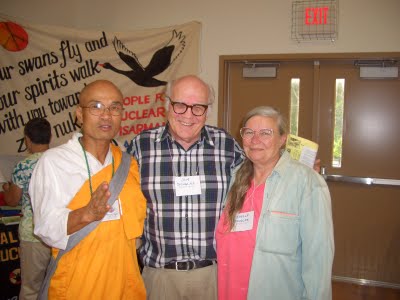 I’ve followed the lead of Jim, Joyce, Bob, Jim and others from the Sojourners Community during the Peace Pentecost days of witness at the US Capitol, embassies, and alongside railroad tracks and military bases during the 1980s. It was the prophetic leadership of Jim and Shelly Douglass and the Ground Zero community that gave me the courage to sit on the railroad tracks to block the nuclear bomb-laden White Train as it passed through my home state of Georgia during that decade of nuclear bluster and threat.

It was the inspiration of Murphy Davis that led to my public protests by carrying a model of the electric chair to our county courthouse in southwest Georgia every time the state executed a prisoner when I lived in the South. Her husband and co-agitator, Eduard Loring, asked me to join him in protest on behalf of Atlanta’s homeless that led to a week in jail during my final year living below the Mason-Dixon line.

While living in Georgia, I had the blessing of meeting a veteran-turned-priest who welcomed me to join his weeklong acts of witness against the training of Salvadoran troops at Ft. Benning, leading me to my first “ban-and-bar letter” from the base which would become the home of the notorious School of the Americas the following year. Roy Bourgeois continued to provoke and inspire me to “cross the line” numerous times since then. We were already vigiling at the military base on a weekly basis when he came to Columbus, GA but it was at his instigation that several of us took the next step of resistance in planting the crosses on the base commander’s lawn back in 1983.

When our family moved from the Koinonia community to Minneapolis in 1990, I found myself in the presence of another large pool of inspiring, committed peace activists to walk alongside me on this path for justice. Marie and John Braun were the prime movers in getting me involved with the weekly vigil on the Lake Street-Marshall Ave. Bridge. The decades of inspired rabble-rousing of Marv Davidov coupled with the gentle spirit of Char Madigan and other nuns from the Sisters of St. Joseph of Carondolet led to my first involvement with the Alliant ACTION vigil group and the insight and ideas of Tom Bottolene deepened my acts of resistance and hope in front of Minnesota’s largest war profiteer over more than a decade. 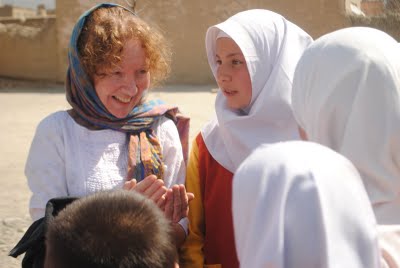 Not all my actions of resistance and hope result in arrest. Kathy Kelly was the one who urged me to join her in sharing the risks with Iraqi civilians in Baghdad as war loomed at the end of 2002. Although we were threatened by our government with fines and long imprisonment for just traveling to Iraq during the period of economic sanctions, no arrest resulted but it had a huge impact on my life and work. Again, it was Kathy’s compassion and determined commitment to peace that reached out to me to meet with young peacemakers in the war zone of Afghanistan this Spring to plant trees for peace.

Walking the Migrant Trail to learn more about the plight of immigrants was the idea of Kat Rodriguez. My previous risky adventures with the over-ground and underground railroad transporting refugees fleeing from the US-sponsored wars in Central America during the 1980s was initiated by Don Mosley and other friends from the Jubilee Partners community. Picking up the vulnerable in south Texas and transporting them to a welcoming Canadian city was work that probably blessed me more than it helped them. Again, this wasn’t my idea; I just followed the lead and vision of others.

Most of my peacemaking has been derivative, following the lead, in the footsteps and trails walked by others. We don’t necessarily need more leaders and visionaries in the peace and justice movements. What is needed are more folk who are willing and able to swell the ranks, hand out the leaflets designed by others, and fill the jails. Thank God for the Gandhis, the Martin Kings, the Dorothy Days – but also for those Freedom Riders whose names we never learned, for those who joined Rosa Parks in the bus boycott, for the hundreds, thousands, who “crossed the line”, “sat down” and refused to move until arrested, insisted on the right to vote, refused to pick up the rifle and instead filed their conscientious objector claim. Those who are present and answer the call week after week vigiling in the cold and the dark. Baking in the heat of the Omaha summer to answer the call from Frank Cordaro to be present at Strategic Air Command headquarters at Offutt Airbase. Or walking in the sweltering temperatures with the Nevada Desert Experience leaders to be present at the nuclear test site. 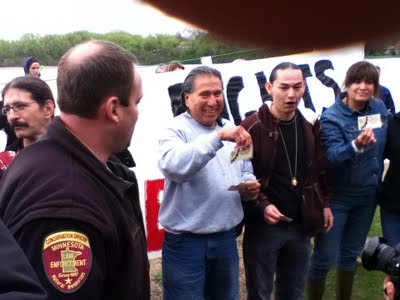 Maybe it is joining local Native American leaders like Professor Chris Mato Nunpa in being present when they assert Treaty rights to fish and hunt. You could join me as I follow the leadership of Chuck, Sonja, Roger, and Coleen witnessing against torture at the Minneapolis Federal Building– or you can join Frida, Matt, Kathy and a score of others when they march on Guantanamo or the Supreme Court or the Senate Office Building as they Witness Against Torture in Cuba or Washington, D.C. Stand alongside Michael Bayly and other LGBT rights activists to lend your voice and support.

You don’t have to be an expert spokesperson about nuclear weapons; Ralph Hutchinson, Jane Stoever, or Ann Suellentrop can provide the leadership but they need others to join them at the Y-12 Plant in Oak Ridge or the new nuke plant in Kansas City. If you want to lend your voice on behalf of those victimized in the foreclosure and mortgage crisis/bank fraud, there will be people at the Welfare Rights group you can follow. The Workers Interfaith Network (WIN) can provide leadership and information if you want to stand for the rights of laborers.

I don’t mind following Martin King as my drum major, I’m content to be a piccolo player in the marching band. Dr. David Harris was my drum major as we marched on the Republican National Convention. It was his idea to go beyond the permitted march to carry our symbolic tombstones with the names of American and Iraqi war dead right into the Xcel Center to present them to President Bush. It was the young organizers of the Minnesota Immigrant Rights Action Coalition who led the way to block the entrances of the ICE deportation center in the Twin Cites. I was proud to join them in the blockade. Kathrine Wojtan and members of the Michigan Peace Team sent out the call for a Minnesota Peace Team. I was happy to follow their lead and directions as I deployed amidst the armored police firing tear gas and chemical weapons. Father Tom, a Maryknoll priest was one of my first drum majors for justice when I hesitantly took to the streets for the first time in Wheaton, IL at the local draft board while I was in college.

The real issue, whether you provide the vision and the leadership or just help by holding the banner and risk arrest, is to be engaged in the struggle to make this world a safer and more just reality. I’ll play the piccolo, will you march beside me with your trumpet or sax?