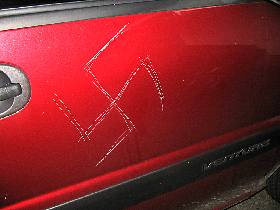 A Minneapolis resident found this swastika etched into her car.

It was early in the morning and Patricia was just about to leave her house when she saw one of the hardest scenes she had faced in this country, since she arrived 27 years ago. Her car was tampered and the paint was scratched with Nazi symbols and a message against her husband, an African-American to whom she has been married for 24 years.

Terrified, she called the city police, hoping for some help. Police arrived but even though they canvassed the block and looked for clues, they were unable to find anything telling them who the aggressors are. The reasons for the attack are more than obvious, Patricia’s is an interracial marriage (She is Latino and her husband African-American) and the message scratched in her car (which we won’t print because of its obscene content) was an open threat to persuade them to leave the neighborhood, considered by the “Neo-Nazi” groups from the Twin Cities as “white territory”.

Police offered them a stronger effort and continuous patrolling through the streets of her neighborhood, but that did not offer reassurance nor put an end to the anguish she felt after the aggression. “My husband is very annoyed by the attack, but I am very scared,” Patricia says.

And she adds, “The swastikas they scratched in our car were done very slowly. Meaning that the aggressors took all the time they wanted. That is a very disturbing fact, because who knows what may have happened if they found me or any other member of my family during the process?”

In the same neighborhood, a month before this attack, another family suffered another hate crime. One morning, as they woke up, they found their trash was burned and Nazi symbols were written all over the place.

Looking from a distance, there is no pattern on these attacks and perhaps there is none but when a pastor receives a call in the middle of the night, telling him about a fire in his church is St. Paul, and by the time he arrives there, instead of finding a fire he finds a burning cross, one can be sure something is going on. That incident happened early this year, during one of the coldest nights of the Minnesotan winter.
The numbers are growing—slowly but growing—and the attackers seem to be choosing a wider range of targets now, all of them members of the minorities in the state.

The incident at the mosque
Less than a year from its reconstruction, the mosque located in 13th Avenue S, Minneapolis, suffered one of these attacks. No one was hurt, but part of the equipment and books were destroyed after someone tried to set the mosque on fire.

According to Sheikh Abdirashid Hassan, director of the Islamic Center Abubakar Assadique, the attack could be catalogued as a hate crime. “While we think this case has the fingerprints of a hate crime, we’re not making any judgment on any particular people, community or faith”, explained.

On that occasion, the leader of the mosque announced that they have received several messages via fax containing insults and other kind of messages asking them to “return to their country or else…”, since they bought the property.

State law and hate crimes
What does the law in Minnesota says on the matter? From 1988, all police departments in the state are asked to report any incidents related to discrimination of any kind and local authorities are forced to keep databases of these crimes.

The aggressions are classified as follows: 24 percent assaults, 19 percent verbal attacks, 10 percent property damage and 18 percent were inscriptions on houses; 68 percent of the attacks were against people and 30 percent happened in residences.

Although the numbers seem smaller, a great number of attacks are not reported to police, because eople fear the attackers because they usually know where the victim or relatives of the victim live.

In addition, many of the cases die in the shadows because the target of the attackers are undocumented immigrants who fear that reporting the attack may lead police or immigration officials to investigate them and deport rather than protect them (this has been the case during this year, after Congress and local authorities began a series of attacks against undocumented immigrants).

St. Cloud and other cities throughout the state are clear samples of that behavior. On the contrary, Minneapolis and St. Paul Police Departments are prohibited to ask people about their immigration status unless they have actually committed a crime (this thanks to a citywide ordinance that prohibits both Police Departments from enforcing immigration unless is related to a crime). And finally, but not less important, language barriers and cultural barriers are hard to overcome when people suffer attacks and they find it hard to communicate with police officers and report the aggression.

When hate crimes knock at your door the only thing you can do is blow your whistle and hope for authorities to catch the aggressors. We all have the right to a peaceful neighborhood, a neighborhood free of hate, and the right to sleep well at night, without the worries of waking up to Nazi inscriptions on our car or our own backyard. Up to this point that peace is slipping away from citizens such as Patricia who is forced to live with the fear of a growing number of attacks from “white supremacists” and wait for Police to catch the aggressors.