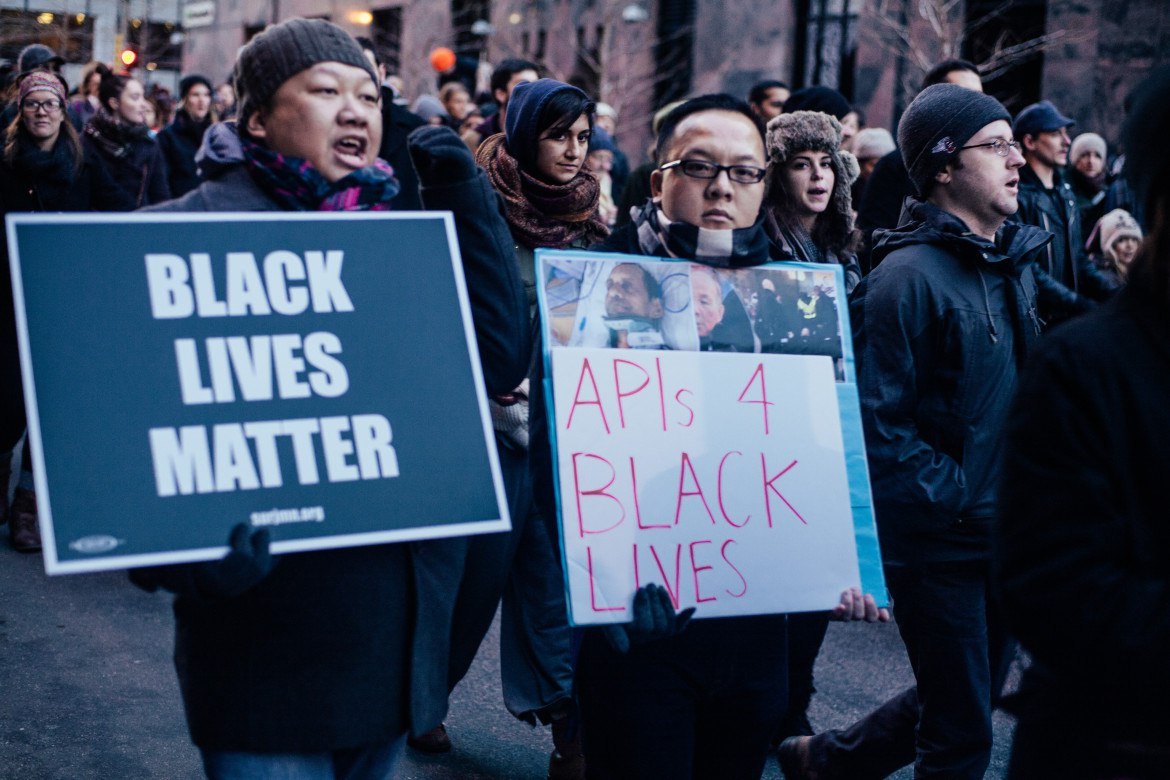 Asian American protesters support Black Lives Matter in a Nov. 24 march in Minneapolis. History shows us that Black and Asian racial justice history is not so different.

When asked what is the mission of the Million Artist Movement (MAM), which calls itself the “artistic arm of Black Lives Matter,” Sandy Agustin said, “We want to artfully dismantle white supremacy.”

Agustin co-organized and facilitated the Power Gathering: Asian American Resistance and Solidarity at Macalester College back in October in collaboration with the Givens Foundation. That event was a part of the larger and ongoing convenings across racial and ethnic groups called by MAM.

The Macalester convening is “an aspiration” in terms of how Black people and Asian Americans can coalesce to achieve that goal, Professor Karin Aguilar-San Juan, who teaches at the college, said in retrospect. Agustin, in a separate interview, agreed. 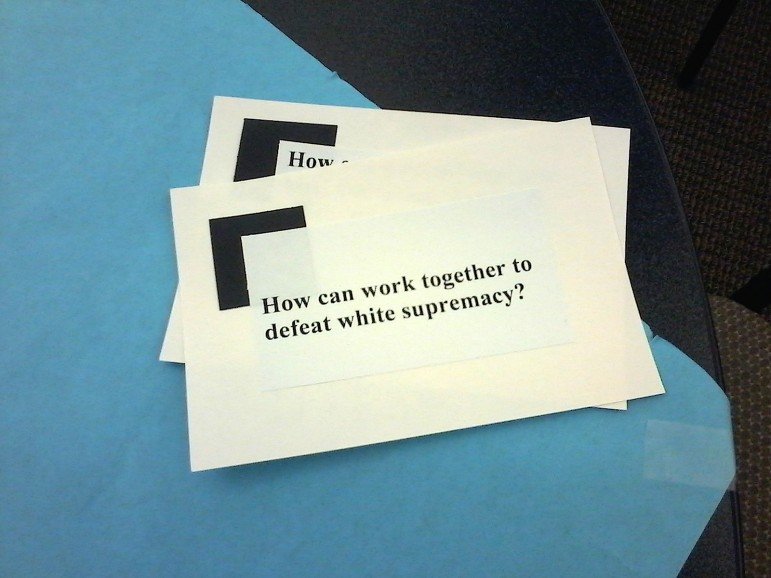 Discussion questions from the Million Artist Movement event at Macalester.

The history of this cross-racial event started when, according to Agustin, Macalester alumna and MAM member Alizarin Menninga-Fong – along with fellow MAM member Mary Richardson – respected the request of Black MAM members to give them an all-Black space during a convening at the Playwrights’ Center to talk about what was going on with Black Lives Matter movement. At that point, the conversations concerned Ferguson and taking over downtown Minneapolis over a year ago this month.

“I want to support to Black liberation from my own experience … even though I’m not Black.” Agustin stated.

Inspired by the AIDS Quilt, Agustin said she thought of the fabric project as “a place where people could put their anger.

“I initially wanted to honor those who died at the hands of police,” Agustin reflected, “but it became more, [considering] the history of Black people and quilting.”

Another artistic form of civil action were the “wish ribbons,” on which people could write their hopes and to eventually hang at precincts, Agustin recalled. Like the quilt, the idea came from another site of protest: The World Climate Conference in New York City at 2014. Instead of hanging at precincts, MAM sent the ribbons to South Carolina this past summer after a white supremacist shot the nine church members and to Sandra Bland’s family via her church, DuPage African Methodist Episcopal Church in Lisle, Illinois.

While assisting in coordinating these projects, Menninga-Fong asked Agustin to help coordinate the convening at Macalester.

This convening also came through another historical moment, Agustin said: The Asian American Renaissance in the 90s, which she described as “an oasis [where] we were finding each other through art.

Aguilar-San Juan said at the panel that she came to the Twin Cities during the Renaissance.

“I actually came for the job at Macalester College in 1999. In 1999, [Minneapolis] was a really different place, I think. I was hired to teach about race, specifically whiteness, but also Asian American Studies. Asian American Studies was something I could do with my eyes closed, except there were some aspects of Asian American culture [I couldn’t teach], like Hmong [culture]. I had to have the Hmong students teach that part of the class.”

Agustin suggested Aguilar-San Juan and Mura as panelists to Menninga-Fong and the Macalester students, who had a skeleton of a program. The students rounded out the panel with dancer/activists Chitra Vairavan and Magnolia Yang Sao Yia from the Ananya Dance Theatre.

“It was awkward for a minute with the Mac students, with their coming into consciousness and realizing how white it was here [in the Twin Cities], Agustin admitted. “I had to explain how to connect [the convening] to Black liberation.”

“There is no Asian American Arts Movement, per se,” Aguilar-San Juan said. “And to say how we are collaborating with Black arts or Black politics at this time is, for me, a need – an internal need – but I think it’s an aspiration.”

Aguilar-San Juan gave a fuller, national context to the parallels and confluences between Asian Americans and Black Americans and why she felt what happened at Macalester was aspirational.

Aguilar-San Juan then explained how the political identity of ‘Asian American’ came about, namely as Chinese, Japanese, Koreans and Filipinos utilized the term as a reaction to the U.S. escalating the Vietnam War, the draft and the racialization of the Vietnamese, which was encapsulated in the slur “gook.” Some the people who joined the armed forces – “usually the Army,’ she noted – did it “to show their immigrant parents how American they were.”

Similar to how Black men enlisted in World War II to prove their patriotism yet faced segregation, some Asian American veterans faced racism, namely being mistaken for “the enemy” or, more blatantly, she said, their commanders ordering them to be targets for shooting practice because they “looked like the enemy.” Thus, the veterans and some other Asian Americans questioned their national and global places in the war and wanting to be a part in the conflict. This brought about Asian Americans forging Third World solidarity, in connecting with anti-colonialist struggles in Asia–including in Vietnam–Africa and Latin America.

But the Hmong and Vietnamese who came here weren’t on that side, Aquilar-San Juan said. They were on the side to help the U.S. fight in the Vietnam War because they were coerced [with the promise of being able to come here if they fought. The politics of the refugee communities is in counterbalance to what was formulated as an Asian American political reality.

“So we’re building Asian American Studies, and I’m teaching and offering my view of the war. In my classroom are Hmong and Vietnamese whose parents were allied with the U.S. forces. So, now you see how difficult it is to say we’re all Asian Americans together.”

That conflict continues to this day, Aguilar-San Juan continued, along with the class component “with the economically poor Hmong and Chinese, who are growing up in Chinatowns [across the U.S.], and poor Filipinos, who are examples of the extreme dichotomies.”

“[With Filipinos], you have children of nannies and maids who got here by some fluke, and you have rich Filipinos who are doctors or who come from landed families in the Philippines. So, we [Asian Americans] have a huge class divide–perhaps 100 times more magnified than in Black communities–and then we have the ‘model minority’ idea.”

Aguilar-San Juan observed thatAsian American students at Macalester didn’t feel the need to take Asian American Studies courses because they believed “everything was fine,” she said. “They were identifying as Asian Americans in a cultural way, but not necessarily in a political way. So, they maybe were happy with their ethnic background, but they didn’t realize that there was an implication to that. It’s not just that you could be Asian, and people could think that you’re ‘exotic’ – and it was mildly discomforting – but it was OK because [Asian Americans] could get everything they want. [So the thought was] we’re in a multicultural world and multicultural representation–a lot had changed since the 70s.”

“But, in my world, I think that every Asian group must connect to every other Asian group,” she continued.

Coming into the present time – without Asian American Studies and other historical contexts, Aguilar-San Juan said – Asian Americans “don’t know how to be in solidarity with Black people. It’s hard to imagine racial solidarity beyond ‘wouldn’t it be cool if we could just hold hands.’”

“What makes [an Asian American] different than a white person saying that?” she commented. “Unless you know your history – and yourself – then saying ‘I’m a person of color’ just isn’t enough. That’s why it’s important to know your heritage––it gives you a lineage, a history. Without it, your rubric of race ultimately becomes that of domination.

“What that means for Asian Americans is owning their part in the ‘model minority’ [idea],” particularly how immigration policies–particularly those that favored educated, fully trained people who received that training [from where they’re from] and those who has some social capital from abroad, then come to the U.S. Then, other people of color who are here are told, ‘look, they did that on their own … why can’t you do that?’ [These policies help] shape that idea, and Asian Americans are used as a “buffer class.”

She spoke of the Los Angeles Riots in the 90s, when, even though Black and Brown people tore down Korean-owned businesses, but the cops didn’t protect them but went to Bel Air and Beverly Hills to protect those properties. That moment made some Koreans reconsider their role as a “buffer class,” and, in response, took Black kids to Korea and did teach-ins with Black people on the radio–and in Korean–to talk about the shared politics that caused the interracial conflict.

“I see an impulse with the 20-year-olds who are political who want solidarity already,” she observed. “But solidarity isn’t a promise – it’s an act. It has to come from an act of self-knowing – and that’s the part that’s sometimes missing.”

So what does this drive for Asian American solidarity, particularly at the convening, have to do with Black Lives Matter, especially what’s happening at the 4th Precinct?

“What has to do with understanding police brutality, with how these divisions have been boiling for decades, how the segregation of cities – in terms of housing and schools – that’s something anyone can understand,” Aguilar-San Juan said

“But Asian Americans understanding [the situation can come from] the case of Fong Lee, who was shot in the back of the head. It was filmed, and everyone saw it – and nothing happened to the cop. It caused a lot of grief for that family. But all we need is one to show that, even in Minneapolis, we face the same thing.

“If I had to teach another Asian American Studies class again, Black Lives Matter gives me a new context–and I’m excited about that,” she said. Prior to 2014, Asian Americans didn’t sign up for her class – only white students. “Now, it’s a new wave of radical consciousness – and that’s a great time to teach.”