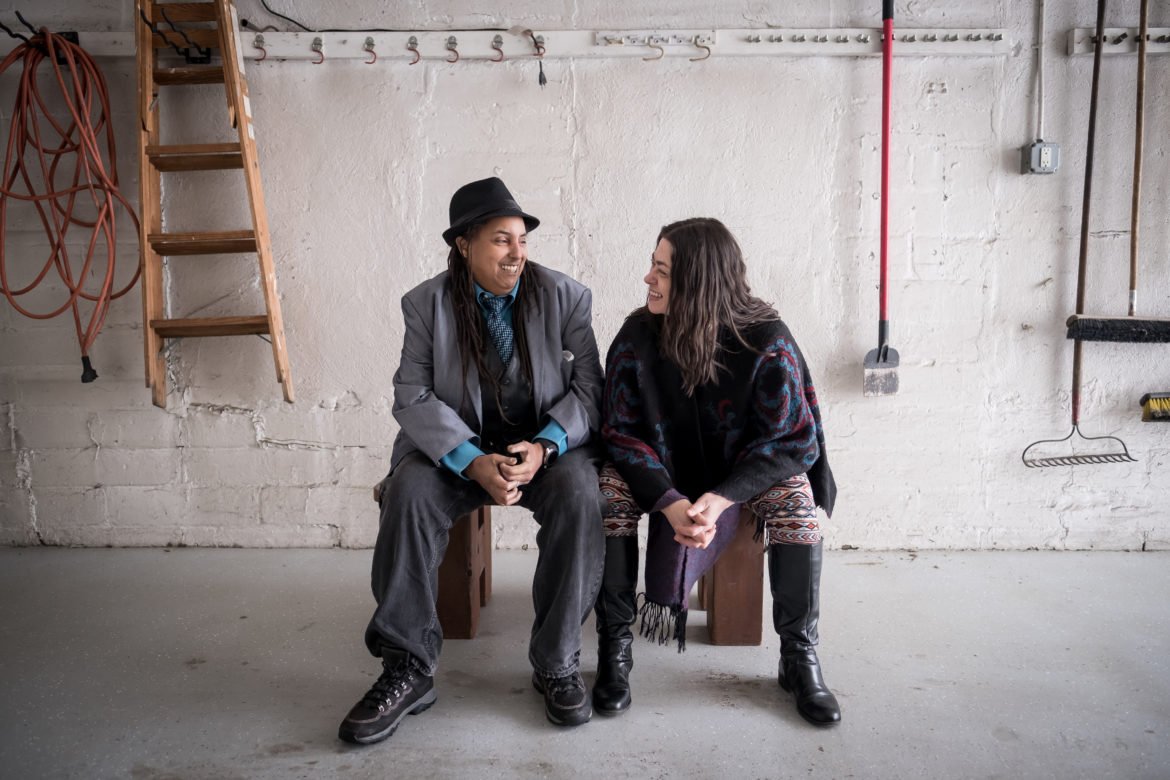 Roxanne Anderson and Anna Meyers, of Minneapolis, pose for a portrait at their Rare Productions space in Minneapolis on February 9, 2019. Photograph by Caroline Yang.

The Minnesota Transgender Health Coalition came first, as a nonprofit dedicated to securing healthcare for trans and gender non-conforming people. A community of marginalized people who were seeking support, connections and belonging developed around The Coalition. Two leaders of that community, Rochelle A. James and Roxanne E. Anderson, subsequently created RARE Productions, an arts and entertainment production company centering queer and trans artists of color. And then in 2011, Cafe SouthSide opened as a safer space serving organic fair trade coffee and nutritious fare. The cafe’s radical hospitality has been spotlighted as a model of an inclusive business.

When founders and co-owners Roxanne Anderson and Anna Meyer envisioned Cafe SouthSide, they intentionally developed it as a cafe, not a bar or club. Those types of establishments and other businesses, such as theaters, that serve liquor are the expected meeting places for the LGBTQIA community, but Anderson and Meyer wanted a space that was welcoming to youth as well as those struggling with addictions. The result was a beloved small business that lasted until early 2018, when according to Meyer, all three organizations were driven out of the building by a series of rent increases that caused increasing financial pressure and then a sale to an owner who didn’t renew the current leases.

In spite of the rent increases in the neighborhood, Minnesota Transgender Health Coalition has moved to 730 38th Street and continues its services there at this location. RARE Productions has also recently acquired a new space. Cafe SouthSide, however, has yet to be replaced or revived.

A place that said yes to queerness, blackness and brownness
When asked about Cafe Southside, sex educator, poet and teaching artist Katie Robinson said, “Cafe Southside gave me food, a job and community. It was a physical and emotional location for me to grow into myself, into my queerness, surrounded by black and brown yeses, and affirmations that I was enough. It was a place I could go and know there would be love for me.” The cafe was “a gentle step out of the isolation that trauma can cause, where there is less risk of being misgendered, less risk of microaggression. We need these spaces to keep us safe.

Safety is important, especially when the threat of violence posed by national chain cafes such as Starbucks or the local Spyhouse, limits who can sit down and simply enjoy a cup of coffee. Both businesses received coverage for calling the police on black men that staff labeled as “trespassers” for not ordering anything. Both businesses later called for racial bias training to prevent similar incidents from occurring in the future.

Junauda Petrus, an activist, writer and multidisciplinary performance artist, echoes Robinson’s sentiment. “It was nice to have a space where black and brown artists, as well as people within the LGBTQIA community had a home. One thing I miss about SouthSide was having a place that had a social justice ethos as well as coffee and tea.” Petrus continues, “It was an actual physical space. A space where you can build connections with new people, run into other people you care about, run into other people you need to have a meeting with …”

Queer and trans indigenous and people of color (QTIPOC) who entered Cafe Southside could rest easy knowing that staff would know how to engage them as fellow QTIPOC. Petrus, who grew up in South Minneapolis, is half of the artistic partnership Free Black Dirt with Erin Sharkey. Free Black Dirt’s webseries “Sweetness of Wild” is a “love letter to Black Minneapolis that was filmed in Cafe SouthSide.”

There are plenty of queer and QTIPOC event series without their own permanent performance spaces including: 20% Theatre Company, Mother Goose’s Bedtime Stories, community oral historical series Telling Queer History and inclusive spoken word and poetry presenters Button Poetry and TruArtSpeaks. If we expand the list of events to include those centered around clubbing and drinking, the monthly cabaret queer Daddy, queer women-of-color-centered Soul Friday and the queer dance night series Grrrl Scout become options. These series take place at different locations with varying levels of queer-friendliness, ranging from the performance venues of Minnsky Theatre, Mixed Blood Theatre, Phoenix Theater and Pangea; to other community-centered cafes like Moon Palace and Seward Cafe.

In most cases, the sense of community for QTIPOC patrons comes and goes with the event, transient and unmoored. QTIPOC patrons must often choose between attending an LGBTQIA-centered space and an IPOC-centered one. Adding sobering history to the picture are the recent closures of inclusive and intersectional art organizations like Patrick’s Cabaret and Intermedia Arts. The need for QTIPOC has only grown with their closures.

The evolution of Anderson and Meyer’s vision
The benefit of more physical spaces for the QTIPOC community is two-fold: the acceptance and understanding between QTIPOC patrons and staff, but also the monetary investment into QTIPOC business owners.

Both renting and owning have their advantages and disadvantages, and they can be complex.  It makes sense that Anderson and Meyer are focusing on the need for the LGBTQIA community to own spaces sustainably.

Anderson and Meyer have not slowed down their activism and community organizing post-Cafe SouthSide. Meyer, who was battling chronic illness towards the end of SouthSide’s run, is currently part of a cohort training to become biodynamic craniosacral therapists and is currently focused on “sustainability on a personal and community level.” She aims to practice and model health for younger queer youth.

This is crucial work for a population three times more likely to experience a serious mental illness, 3-4 times more likely to attempt suicide, and more than twice as likely to abuse drugs or alcohol. Most of these elevated risk factors are due to prejudice, stigma, minority stress –  defined by the American Psychological Association as stress “induced by a hostile, homophobic culture, which often results in a lifetime of harassment, maltreatment, discrimination and victimization” – and rejection or lack of support from families.

Meyer said, “Community, connection and finding places that feel like home are crucial to our survival and our thrival. We need to make sure we are surviving, so that we can thrive. Moving forward, I want to make sure that … the way in which we do our work is the work itself. You can’t do community work that is counterproductive to what you’re trying to achieve.”

In addition to being named a 2018 Bush Fellow, Anderson provides trans-inclusive consulting and training to businesses through the City of Minneapolis’ ReCast program. Anderson still hosts events as director and co-founder of RARE Productions, and is continuing their work as board chair for the Minnesota Transgender Health Coalition. The Minnesota Transgender Health Coalition has been participating in the second Bush Community Creativity Cohort and The First Wave’s Of/By/For All Cohort.

As part of their Bush Fellowship, Anderson aims to research best practices of LGBTQIA community spaces, visiting dozens of centers across the nation and speaking with community leaders. The goal is to create a inclusive, holistic, trans- queer-led and BIPOC-centering community hub. “This is the place where something like Cafe SouthSide might reappear as one of the anchor spaces in the building,” Anderson said.

“What I’ve seen is not that any LGBT organization that’s already here in the Twin Cities should go away. It’s that we should all work together. Of the LGBT organizations that’s already here in the Twin Cities, about 12 or 14 of them pay rent in some way, shape or form; and they’re paying that to a variety of different landlords, none of whom I’ve been able to find out are queer. So we’re putting money out of the community … that could be going to our own equity.”

Based on the feedback given in community conversation, visions for the center include mixed-income housing, retail space, a theater or gallery space for queer artists, a fitness center where gender non-conforming people can escape judgement and pools or saunas that promote integrative health. Most of all, instead of simply accepting any existing building to occupy, Meyer’s goal is to encourage the community “to create the center that we want, one that will indeed give power to trans and queer people of color.”

Meyer also lastly emphasized that people of color and queer people are being vilified and targeted more under the current administration,  “And so it’s vitally important that people direct their time and financial support to those places like Minnesota Transgender Health Coalition who are fighting to ensure the survival of our people.”

The coalition remains up and running and can always use additional “shot-caller” volunteers — volunteers who are qualified to provide hormone replacement injections. The MN Transgender Coalition is open and is in the Goodrich Building 730 E. 38th Street Suite 108. And given that RARE Production has very recently secured a new space, Anderson hopes that the new landlord is similarly interested in sustaining a long-term relationship with the community.

Correction: An earlier version of this article had used the incorrect gender pronoun for Roxanne Anderson. Anderson’s correct pronouns are they/them/theirs.