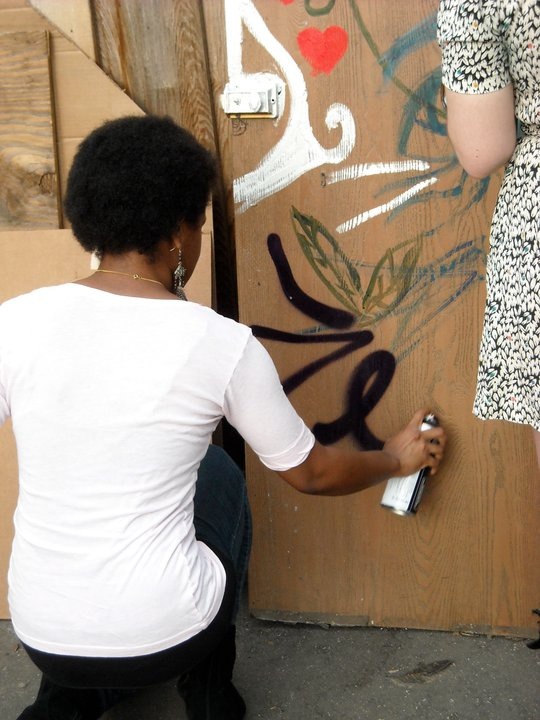 Honestly, I don’t know what to tell you. Not to imply that I’m unaware of my ethnicity or the complications that could arise from being a black woman working in a field that has been dominated by white men for centuries, but most of how one relates and understands his or her own racial identity has to do with others’ perceptions of it. As of yet no one has approached me in any way that suggests that my race has any impact on my career. That being said, I think that race is very impactful in regards to what I do.

During my brief stint in art school my English teacher assigned the class a conversational reading that illustrated the obstacles an artist of color may experience while in the pursuit of a career. Long story short, it scared the shit out of me. Back then I wanted to be a professional artist so badly that I could taste the blood, sweat, and tears pooling around in my mouth, and then to hear that because I was black I might only get to show my artwork during Black History Month made me feel slighted. But perhaps this reading was a bit dated because so far I haven’t had this problem. Given the circumstances of my work, though, that might be the least of my worries.

Think about it: I’m a young, black woman living in Minneapolis, Minnesota working very hard to maintain a career as an artist and writer. My work consists of male genitalia and baked goods and I recently wrote a post for The Tangential concerning Disney’s most charming male characters to date: raping, mucus-spewing wife-beaters. It’s cool in 2013, but if it were 1950 I’d probably be dead by now.

Maybe that does say something about the times, because while I feel that people are less likely to buy artwork featuring people of color, for the most part being a young black woman in this business has been a great asset. I can’t explain it without sounding kind of arrogant, but I feel like people don’t know what to think when they encounter me. Maybe they expected me to be white (although if you’re at least friends with me on Facebook then you know what I look like) and the discovery that I’m black changes the perceptions of what I do and how I go about doing it. Maybe my work takes on a second life because of this. I haven’t been working creatively for very long so there’s still plenty of time for issues of race to play a more negative role in my career’s progression, but aren’t we sick of that scenario yet? The idea that genetically inherited characteristics that we cannot control would be harmful to our dreams and goals is the saddest thing in the world.

But racism in general is a very sad thing and I fear it constantly; even, and most especially, when I know I shouldn’t have to. It knocks you off your feet and reminds you that no matter how successful you are, that the skin you wear makes you vulnerable and powerless. It’s one of the many social minefields that we all walk through every single day and you just learn to live with the risk. Artwork is, so far, the best weapon I have to combat racism and the one thing that gives me confidence within it.

Whenever someone walks into a room full of people, the first thing they all see is your race and then your gender, but when you’re an artist the art walks into the room first and manages to defuse any discomfort that may be brought on by your physical appearance. With art I can create worlds where girls who look like me are goddesses and never get shamed for the shade of their skin or the texture of their hair. Who cares if no one buys these images, because they cannot be denied or ignored and I will keep making them regardless.

We have 28 days in this month and this exploration is far from over. Expect more posts, interviews, and commentaries about being black within the art scene in Minneapolis and in general.