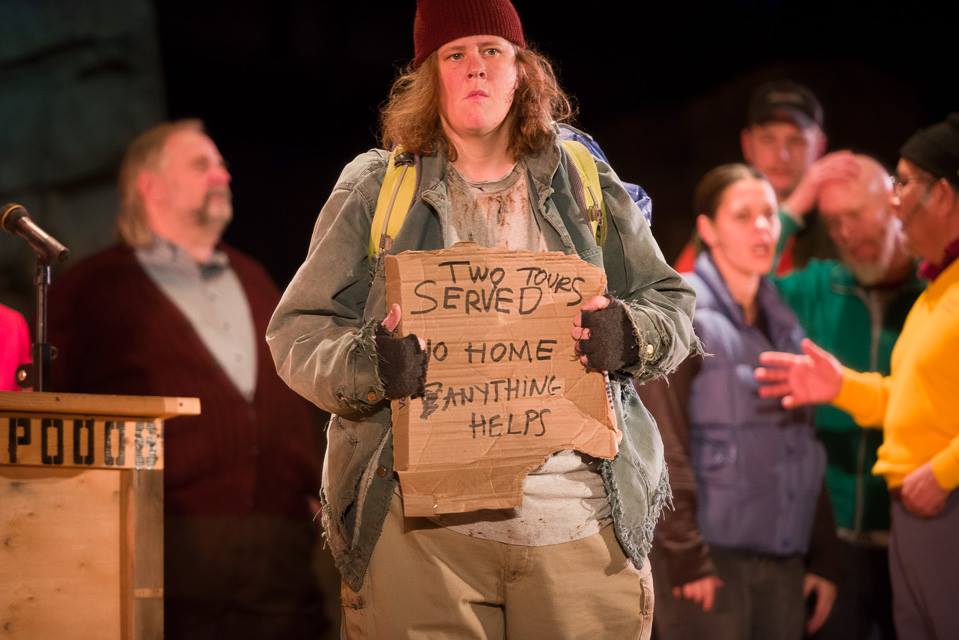 In the early sixties, the Living Theatre convinced the audience of Jack Gelber’s The Connection that the performance was played by actual heroin addicts. The conceit stunned the sensibilities of the middle-class audience. It was not considered appropriate that they should listen to persons who were so far outside the social mainstream.

In contemporary society, American military veterans find themselves similarly cut-off from the mainstream, suffering the identity crises and psychological pathologies resulting from social voicelessness and invisibility. With the support of Mixed Blood Theatre, Leah Cooper and her Footprints theatre organization has attempted to raise the missing narratives of Minnesota vets to a new level of consciousness.

When Cooper approached a group of Minnesota military veterans about creating a theater work about the issues they faced, she was met with both interest and cynicism. Most vets felt they lived a story that was not yet fully told. However, some wondered if the production Cooper proposed would get to the truth or would it be like what they called those crappy movies.

Interestingly, many vets did not like The Hurt Locker and  its portrayal of soldiers in the war zone and returning home. They pointed to Jarhead as more realistic. Cooper and her cast of The Veteran’s Play Project, the goal of the production was not of epic proportions. However, they did want to fulfill a fervent wish: that Minnesota’s military vets be viewed by the general public with a little more empathy and understanding as human beings.

Thus, the age­-old question raises its hydra-like head. What is more important in art, product or process? Is artistic expression, not facilitated by professionalism, automatically more authentic? Does a director of a socially conscious play have to choose between verité and virtuosity?

At a time in the distant past, theatre was a sacred ritual that defined a community. The participants could make an intense and meaningful connection with the society-at-large. They expressed themselves with words and emotions that were raw and unmediated. Can this effect still be achieved in our modern world of commercialized culture?

The Cornerstone Theatre in Los Angeles is renowned for its verité process that helps a community reveal a narrative currently absent in contemporary society. Cooper recently spent a summer in LA, studying this process which she describes as quite prescriptive. First, story circles are established to provide a recognized safe place for people to share their thoughts, feelings and stories. The stories include the personal experiences of participants and stories they hold in their hearts about others. They speak for themselves and come to their own consensus about what they collectively have to say to the society-at-large.

Secondly, a play is written that synthesizes characters and universalizes the experiences related in the story circle into a plot. Finally, the show’s cast is drawn to a large extent from the story circle participants.

Cooper directed a workshop of theatre games and improvisational exercises to help the cast develop their performance skills. The workshops also continued the exploration of the play’s theme by giving the cast time to investigate how they perform the role of a vet in society on a daily basis. What is their emotional demeanor toward others? How did they moved differently in the military? This exploration leads to the creation of dance-rituals that allow the performers to speak without words about their emotional experience. It also reveals the fusion of military influence with their personal identities.

Cooper feels the performance site at Base Camp on the grounds of Fort Snelling is very meaningful to veterans. Many participated in stand-down events at Base Camp. But the stage itself also shaped the play. Upstage of the playing space was a huge slab of sedimentary rock, with its ragged layers of limestone. It dominated the stage not only with its large proportions, but its presence was iconic, representing time and the eternal stuff of consciousness. To Cooper, a giant rock can’t be ignored anymore than the effects of war on a significant portion of society.

As a socially conscious theatre artist, Cooper had many learning experiences along the way from rehearsals to opening night. First of all, it was apparent different vets had vastly different experiences. Some of the biggest differences were generational between Vietnam vets and vets of the Iraq and Afghanistan wars.

Vietnam vets were most often drafted into military service and the social mileu surrounding the war was very different. Some Vietnam vets remembered being called “baby killers” upon returning home. Though the issues surrounding Vietnam vets seemed to dominate the production, Cooper felt it was because they were particularly drawn to the process. These vets have emotional issues they tried not to think about for nearly forty years, but now, in their late fifties and sixties, they find the issues still there to be dealt with.

Vets of the last decade were part of the modern all-volunteer military. This can lead to a personal guilt and self-recrimination. As one vet of Desert Shield relates in the play, what right do they have complaining about the effects of the war when they were fully aware of what they were getting into when they joined?

Cooper was surprised to find that military training itself can be traumatizing to individuals. It was described by some vets as an entire other reality from a society that values individuality and self-actualization. The vignettes and rituals portrayed in the performance show the demeaning, brutalizing techniques of military trainers to reduce the humanity of its soldiers to the point where they will submit to authority and obey any orders.

Leah was shocked to find out that all generations of former soldiers had stories about bayonet training. She was surprised it was a skill still relevant in modern warfare. However, the vets explained the point was not learning to use the bayonet, but to yell “kill” loudly enough for your sergeant to think you really meant it. This experience wounded the conscience of many vets, reminding them what they became was hardly compatible with a humane society.

The play addresses the growing awareness of the scale of sexual assault in the military. In a scene leading to the rape of a female air force recruit, the audience can’t help but see this violence as coming directly out of the military mentality.

Overall, the participation of the vets in their own play heightens the sense of truth that is most often missing from productions with professional actors. The  individual participation, the community response and the audience interaction creates a performance that can be acknowledged as an important statement for social change. All hoped people would understand Minnesota vets a little bit more, perhaps see them as a little bit more human.