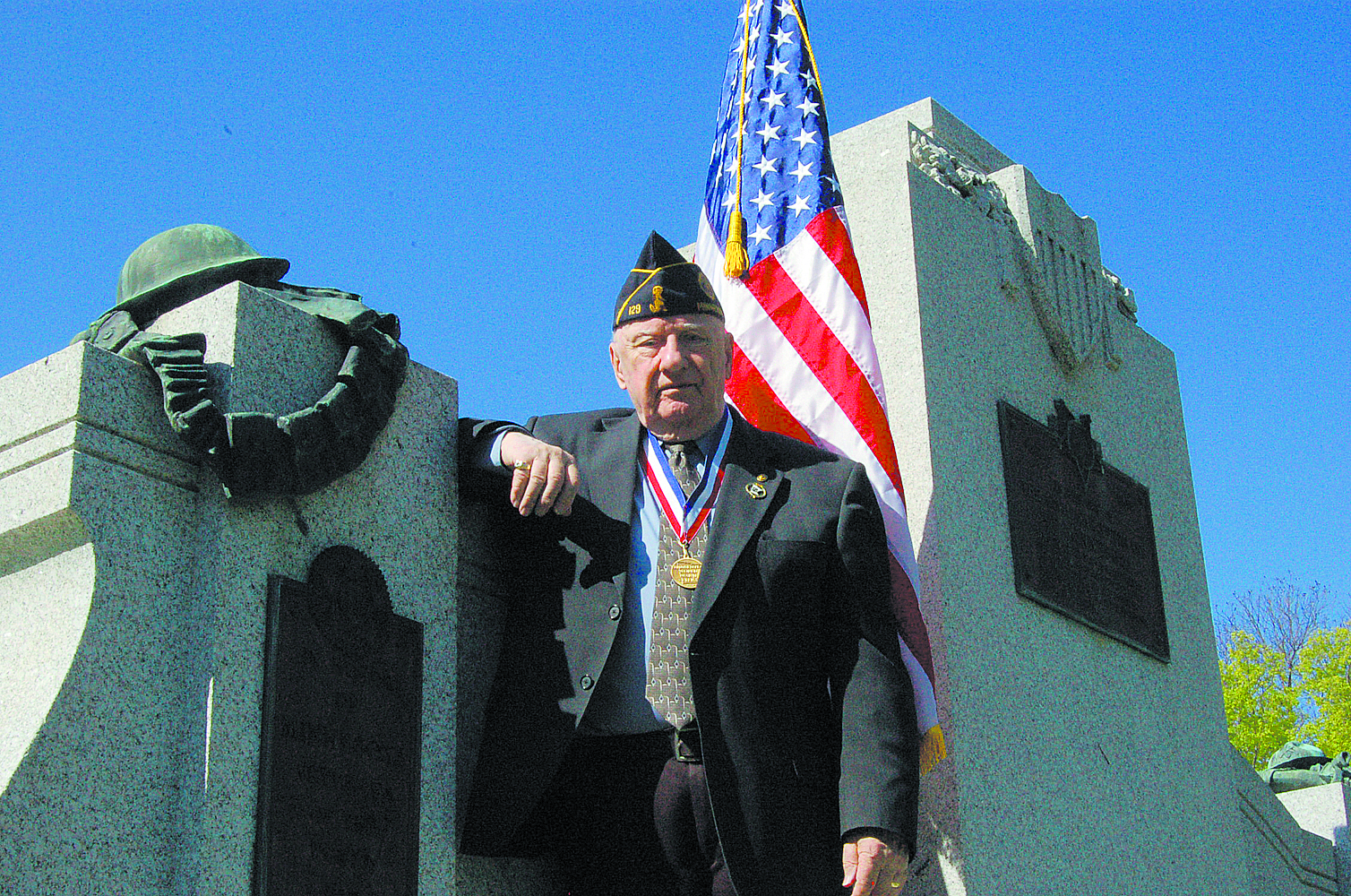 Veteran Nick Kakos at the Soldier’s Memorial in Section 24 at the Lakewood Cemetery. (Photo by Bruce Cochran)

He likes to tell people he is “Nick, the bad Greek” because his last name, Kakos, means bad in Greek. Few people would agree with this description. Nick Kakos devotes his life to serving his community and his country.

The East Calhoun Neighborhood, St. Mary’s Greek Orthodox Church, American Legion and Minnesota Veterans Home are some of groups to whom Nick has devoted countless hours of volunteer services.

Father Paul Paris, priest at St. Mary’s Greek Orthodox Church, had this to say about Nick:

“Nick truly has a servant’s heart and has been volunteering time to the church and our parishioners for decades. Going back to 1951 Nick was a founding member of the Greek Orthodox Youth of America (GOYA). This was a major national youth movement which had a tremendous impact on the life of the church at large and from which many future leaders arose.

Nick’s service has ranged from running the raffle at the annual Greek Festival, to his leadership as a member of the parish’s Missions and Outreach Committee and his efforts on concerns of religious freedom for our Ecumenical Patriarchate. But where Nick truly shines is the way that he has quietly helped many parishioners in times of need. Nick has assisted the elderly with their finances and has been there to help with funeral arrangements taking a great deal of stress off of the shoulders of family members.

Nick is a busy and dedicated servant, but what he loves most is the one on one time with people and just being able to help.”

Nick has lived in the East Calhoun Neighborhood since 1964 and in Minneapolis his entire life. He was born in 1924 at the former St. Barnabas Hospital on the site where the Metrodome, home of the Vikings, now stands. His parents both emigrated from Greece, were introduced by a matchmaker and spoke Greek at home. He graduated from the former Central High School in January of 1946 and left the next day to serve three years in the US Army Air Corps.

He worked for 33 years at the Federal Cartridge Company/Twin Cities Army Ammunition Plant. The site where that company was located is now currently being considered for the Vikings’ new stadium. When the company closed in 1994, Nick got his CPA certificate and is currently self-employed providing accounting services.

The Neighborhood Revitalization Program (NRP) was a priority for Nick since its inception in 1996 until its demise in 2011. Roles included being a member of the NRP policy board from 1996 to 2011 and leading ECCO’s participation. One of the outstanding projects benefitting the community was the children’s playground at Lake Calhoun. Nick says the NRP was an excellent program, a model for the rest of the country and disagreed with the takeover by the City.

As an American Legion member for 65 years, Nick was commander of his Hellenic American Legion Post 129 in 1951 and 2001. He is now legislative chair for Minnesota’s Fifth Congressional District working to remind the Minnesota State Legislature of the state’s responsibility to veterans.

Programs for youth and young adults are a priority for Nick. He calls this his avocation. He has been a leader in youth baseball and was named to the Minnesota American Legion Baseball Hall of Fame in 2001. That same year he was named Minnesota’s Legionnaire of the Year.

Sponsoring Bingo at the Veterans Home and Armatage School participation in a school patrol camp are projects in which Nick and his Legion Post are active. The commitment of Nick and his Legion Post to teaching citizenship and government to youth is exemplified in their sponsoring Boys and Girls State for 11th graders and an oratorical contest where youth create and present speeches about the Constitution and government.

Hellenic American Legion Post 129 is hosting a service in the St. Mary’s Greek Orthodox Church section of Lakewood Cemetery on the Sunday before Memorial Day. On Memorial Day they produce a program at the Veterans Home including visiting dignitaries, a bagpipe band, lunch and Lt. Col. John Morris, chaplain of the Minnesota National Guard, reading names of those veterans who passed away during the year.

Nick says he is determined to be the last living veteran of World War II. It’s a good bet much of that time will be spent as an active volunteer.