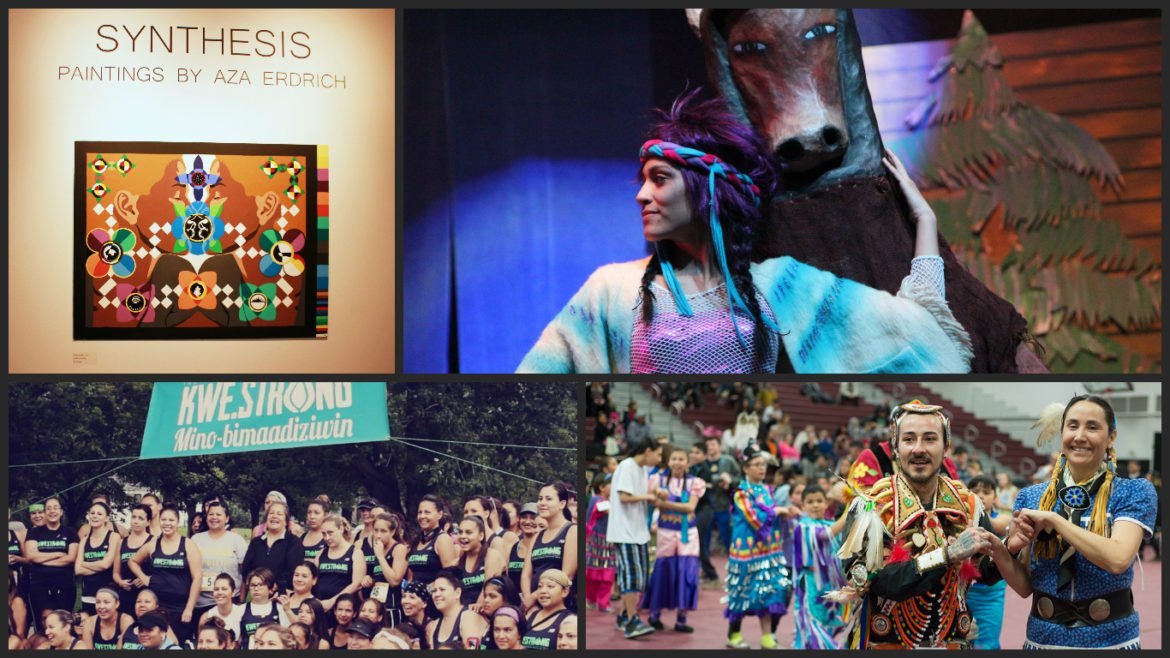 Clockwise from top left, a piece from Aza Erdich's "Synthesis" exhibition at All My Relations gallery, Lorna Her Many Horses performing with New Native Theater in 2012, participants in the seventh annual Augsburg College powwow and participants in the 2015 KWE.STRONG triathlon. Daily Planet file photos.

The hardest part of trying to do intersectional work for me, as an Anishinaabe woman, is that most people–even most people of color and other oppressed peoples–know so little about Native people. I had a lot of difficulty recently when someone (a respected changemaker) tried to tell me her opinion on why Native people don’t have it that bad, when no part of her opinion was based in truth. It is hard to not feel resentment when people bring huge, common misconceptions to the table: of rich Indians, of free college and casino money.

We have to remember that white supremacy purposefully doesn’t teach us about each other’s history and cultures in order to keep us divided. I’m trying to remember compassion in all my work. I’m trying to give what I can of my time and knowledge so that we have space to build together.

Because of course, people in Minnesota mostly know nothing about Native people. Our graduation standards mandate hardly any education about the Native peoples of this state (two weeks of study in sixth grade). In college, most people don’t take Native history courses. It’s left to Native people to explain who we are, where we come from, what we are fighting for.

It’s so rare for Native people to even be mentioned in mainstream media or in political dialogue. And when we are, it’s almost–maybe certainly–never from a Native perspective. Most non-Native people don’t seek out Native media, and many don’t know any Native people. Most Americans never have access to any sort of indigenous perspective.

It’s up to Native people to constantly ask people to stop appropriating our cultures. Because there are actual impacts to appropriation. Please, don’t get that dreamcatcher tattoo. Please just stop. Actions like that bring about even more added stress of trying to protect our culture from the vultures.

It’s left up to Native people to explain sovereignty. That we aren’t just fighting for equal rights. That the United States government has never given us rights, but only impeded our sovereign rights as the original occupants of this land.

In organizing circles, there is a commonly accepted idea that you never have to be anyone’s teacher. As an Anishinaabe woman trying to do change making work, I’ve never felt like I have that option. There are so few of us, that if we don’t share our narrative, who will? If only half of us graduate from high school, how do we get our stories out there? If only 13 percent of us graduate from college, how much burden do we have to rely on that 13 percent to always be the ones to tell our story? To always be the ones at the table?

Let’s educate each other. Let’s be open to being educated.