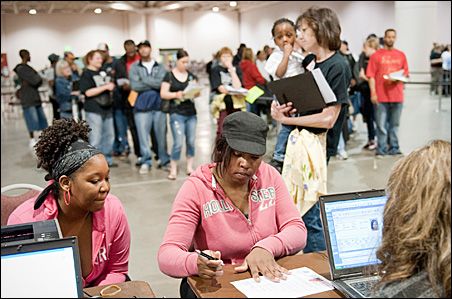 Gloria Gary, center, has been homeless for a year, one of at least 13,000 homeless in the state.

A day after a tornado wreaked instant havoc and homelessness in North Minneapolis, I meet Gloria Gary, a woman who hasn’t had a place to call her own for a year.

She knows only too well the effect of nights spent couching-hopping or staying in emergency shelters: “I don’t know if I’m going through a depression or what,” she tells me.

Our meeting Monday played out like a scene from a slow-motion movie, each of us moving toward one other hesitantly, an unlikely pairing, except for Project Homeless Connect. I’m a long-married journalist with two grown sons; she’s a single 21-year-old woman with her wide-eyed 2-year-old boy in tow, one hand in hers, the other in his mouth.

Before our six-hour day together was over I’d be rocking her son, Javion, on my hip, singing him “Twinkle, Twinkle Little Star,” and guiding her to people who might help her change her life: specialists in housing, legal issues and emotional health gathered at the Minneapolis Convention Center.

But I’d also see how hard it is to get people off the couches of friends or family and into their own affordable places, especially as the numbers of homeless climb in the wake of Sunday’s vicious twister.

By Tuesday, organizers had hustled to host a smaller-scale repeat performance — Project Connect Tornado Assistance Center — that drew more than 1,200, increasing competition for safe and affordable housing. Experts estimate major damage to the housing of 5,000 to 6,000 people.

But Project Homeless Connect, hosted by the city of Minneapolis and Hennepin County and costing $35,000 to $40,000 in donations and private funding, was making its 11th appearance. It’s a gathering of the needy thousands and those who can help — from public and private sectors — coming together with hope big connections can be made in quick time.

Almost 300 other U.S. cities do something similar, including St. Paul (June 28). It gets things done, says Sharon Meister, taking the day off from her job as a social worker for Hennepin County to volunteer.

As a journalist, I typically wear an observer’s hat, but I left it home Monday to join a sea of 1,100 volunteers dressed in black and white t-shirts and hoping to make a difference in the lives of about 1,800 homeless and near-homeless.

Our shirts boast: “Ending Homelessness, one person at a time.” I am there to check out the premise.

Gloria and I exchange “hi’s” and names and head to a pair of chairs in one row among hundreds of chairs facing one another like so many chess pieces, settling down to a questionnaire.

She’s been homeless for a year, one of at least 13,000 homeless in the state, last housed with another single mom and her child in a place that went into foreclosure. Before that she says she “forced” herself to go to an emergency shelter in Minneapolis, where she stayed three months.

“I don’t want to be in a shelter. My son has health problems,” Gloria says earnestly. Asthma, it turns out, and there are health issues, related to his “flipping backwards” out of her arms at an airport and injuring his head in the fall.

For now, she’s living with her cousin, but that won’t work long term. 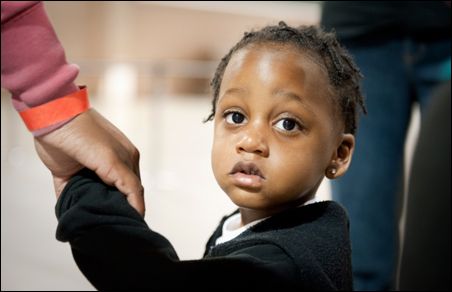 Gloria Gary would prefer not to live in a shelter while tending to her son Javion’s (above) health problems. (Photo by John Noltner)

Her only income is a $430 monthly check she’s expecting to receive June 1 from the Minnesota Family Investment Program, nowhere near enough for rent.

At an earlier training session conducted by the coordinator of the Office to End Homelessness in Minneapolis and Hennepin County, volunteers had been told to ask “guests,” as we were to consider them, to prioritize their needs.

So I ask Gloria. Her top concern is her state of mind, she says, followed by housing. “I try to think positive, but sometimes it’s hard.”

Leaving Javion happily in child care to play, we head to the health-care resources room. She talks privately with folks from the Hennepin County Mental Health Center, who give her information about a support group. I see a sign for the University of St. Thomas Interprofessional Center for Counseling and Legal Services and guide her there, as well.

She’ll follow up with them, she says, because they’ll talk with her one-on-one.

Her story comes out patchwork while we line up for help and over lunch. She tears up a little, telling me of a troubled family background, being a single mom, a thin employment record, some history of paying for her own apartment.  A high school grad, she’s worked at restaurants and a debt collection agency, was once fired though she can’t understand why.

After lunch, we head to a room with housing specialists. Representatives of Simpson Housing Services, which provides transitional housing for families, are there and so she hears more about their lottery system for filling housing openings. The wait could be long, she’s told.

Other specialists suggest she may have to return to emergency shelter to be able to qualify for housing assistance.

“You mean,” I ask, “she has to go into emergency housing that costs the county though maybe she could stay with a cousin for free until something gets arranged?”

We bring my question to experts at the information desk. Check with Danita Banks, we’re told, a housing pro with Hennepin County.

The next day I bring the issue up with Cathy ten Broeke, coordinator of the Office to End Homelessness in Minneapolis and Hennepin County, major players in the event. “This is the big challenge,” she tells me. There’s a huge gap, even when people are working hard or have disability or other income, between what they can pay and the housing that is available.

At Project Connect, Gloria and I make a last stop. Being Gloria was foreclosed on and the property owner didn’t return her $1,400 security deposit, Banks has advised we check with the legal folks.

A trek to legal provides happy results. Housing attorney Matt Eichenlaub, from HOME Line, tells her she can sue her former landlord for the security deposit and more, enough to perhaps set her up in a new place, but she’ll have to assemble details necessary for a lawsuit.

He jots down a checklist of information she’ll need and where to get it, including the property owner’s name and address and the foreclosure notice, then gives her his business card and a caveat: “Suing someone is easy, but getting money out of them is hard.”

Still, she’s hopeful. “That made me a little happier, to think I can get some justice,” Gloria says with a slight smile.