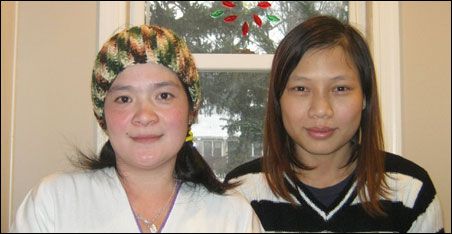 At 16, Kaw Tha Blay Paw fled for her life from her village in Burma.

She’s 36 now and lives on the East Side of St. Paul with her husband and three daughters. From the sound of it, their possessions are few but their life is rich, a life much different from the Thai refugee camp they used to call home.

Still, until the other day Paw didn’t even have a winter coat. Instead, she layered up in sweatshirts to make the walk to MORE Multicultural School for Empowerment, where she’s learning English.

“If I run, it takes 20 minutes. If walk, 30 minutes,” she tells me through MORE translator Day Wah, a Karen immigrant herself.

Now Paw wears what she calls a “waterproof snow coat” thanks to MORE’s annual holiday Gift Give Away and an anonymous donor. The gift drive is one of many opportunities for the generous around the Twin Cities who share in the spirit of the holiday season with those less fortunate.

Very seldom do we know who receives such gifts of food or clothes or toys, though we can’t help but wonder. Paw is one such beneficiary.

As MORE’s executive director Cathy Rucci tells it, the immigrants and refugees who seek services at her nonprofit are special, a group of many races, faiths and cultures who’ve come to the United States to live and work in peace.

Their needs are seemingly simple and their gratitude sincere, she says.

Offerings arrived in huge, black garbage bags for the Gift Give Away at MORE last week, the bulk of them from parishioners at the Cathedral of St. Paul.

Coats, blankets, mittens, hats, dolls, coloring books and other toys crowded the small garage behind the two-story house that is MORE’s headquarters on Wheelock Parkway in the McDonough neighborhood. The area has served as a launching pad for generations of immigrant groups with MORE, operated with the School Sisters of Notre Dame, providing supportive services as well as food, furniture and transportation to low-income persons since 1985. 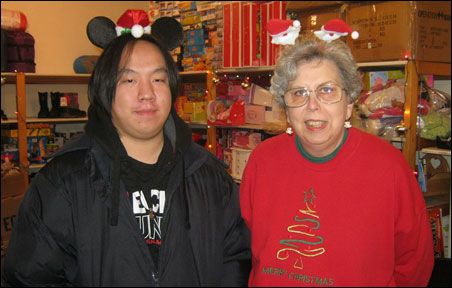 Standing in front of gifts they’ll help distribute to refugees and immigrants through MORE are volunteers Sou Vang, left, and Diane Phillippi.

MORE participants were invited to select a few items, perhaps one toy, one big gift and two small gifts, depending on family size. About 230 households and 1,000 individuals benefited.

“They started looking at the toys, but then focused on the necessities” like boots and pajamas and sleeping bags, says MORE volunteer Diane Phillippi, a retired social worker who has been tutoring immigrant adults for 20 years here. Many of the families have nothing, she says.

Besides the warm coat, Paw brought home some little wooden toys, a few books, crayons hats and mittens, she says.

But she couldn’t save them to give her children on Christmas. “When she got home her kids so happy to see they look at and take away,” explains translator Wah.

Paw and her husband, a meat cutter working in South St. Paul, live in an apartment nearby with their three girls, who are public school students in second, fifth and 10th grade. The children are delighted with at having a place of their own after years in a refugee camp. They especially liked their soft couch because they had no furniture in the camp.

What she saw when she arrived in St. Paul that cold April 30 in 2008 before the trees had leafed out shocked Paw.

“Usually in our country April is so hot,” says Wah. “They took her to the refugee resettlement office and she say, ‘How come these trees all die? How are we going to do here?'”

Rucci says this group is so different from some others she’s worked with at the holidays. “..They’re so happy and thankful for anything they can get” because their needs are so great. Even in the Minnesota winter she sometimes sees students wearing flip-flops.

Refugees and immigrants, they remember their former lives.

The village in mountainous Burma, now also called Myanmar, where Paw grew up is gone. “The soldiers came,” Paw says and drove her people, the Karen (pronounced ka-REN), an indigenous ethnic minority often persecuted, on a three-day, three-night trek through the jungle to a Thailand refugee camp. She lived there almost 20 years.

Life in St. Paul is a little better now than when they first came, Paw says, because she has friends and her husband is working.

Her Christmas wish is that her family be able to continue to live together. Among her neighbors, some husbands and wives live apart for the work week because the men are employed at meat industry jobs in Austin, Albert Lea, Marshall and Worthington.

Paw and her family will celebrate Christmas Day at First Karen Baptist Church with prayer and song, a gift exchange and a potluck. She’ll bring chicken and sticky rice.

As for what she has to say to those who helped make her families Christmas merrier?

“She want to say thank you so much, because the gifts are very helpful for her family and they are happy. And she wishes them to be happy and God bless them,” Wah translates.