It’s sad to see a restaurant go. It’s like an old friend who suddenly leaves town without saying good-bye, and you never know if it was something you said or did that made them leave.

True Thai used to be one of our favorite family outings. Everybody had their favorite dish, but we’d all share. We especially loved the vegetables with green curry and the chicken pad Thai with peanut sauce.

I remember the excitement when they opened the new space in 2008. They moved into Seward Redesign’s Frankly 27th space next door and doubled their seating capacity. It used to be, sometimes around dinnertime you had to wait for a table. No more. Expansion of a restaurant is always tricky, especially if you don’t own the building, but it seemed like it was working quite well for True Thai, at first. Then, tragedy struck. Their chef, Anousone Phanthavong, was killed in a hit and run accident by Amy Senser in August of 2011. Senser was sentenced to three years and five months for leaving the scene of an accident. She left Shakopee prison on April 24, less than two years after her incarceration began with time off for good behavior.

Soon after the accident, Anna Prasomphel, the owner, decided to sell her business. The new owners, Charles Whitney and Anna Fiesner, didn’t seem to have much experience running a restaurant. Almost immediately there were complaints about the food. 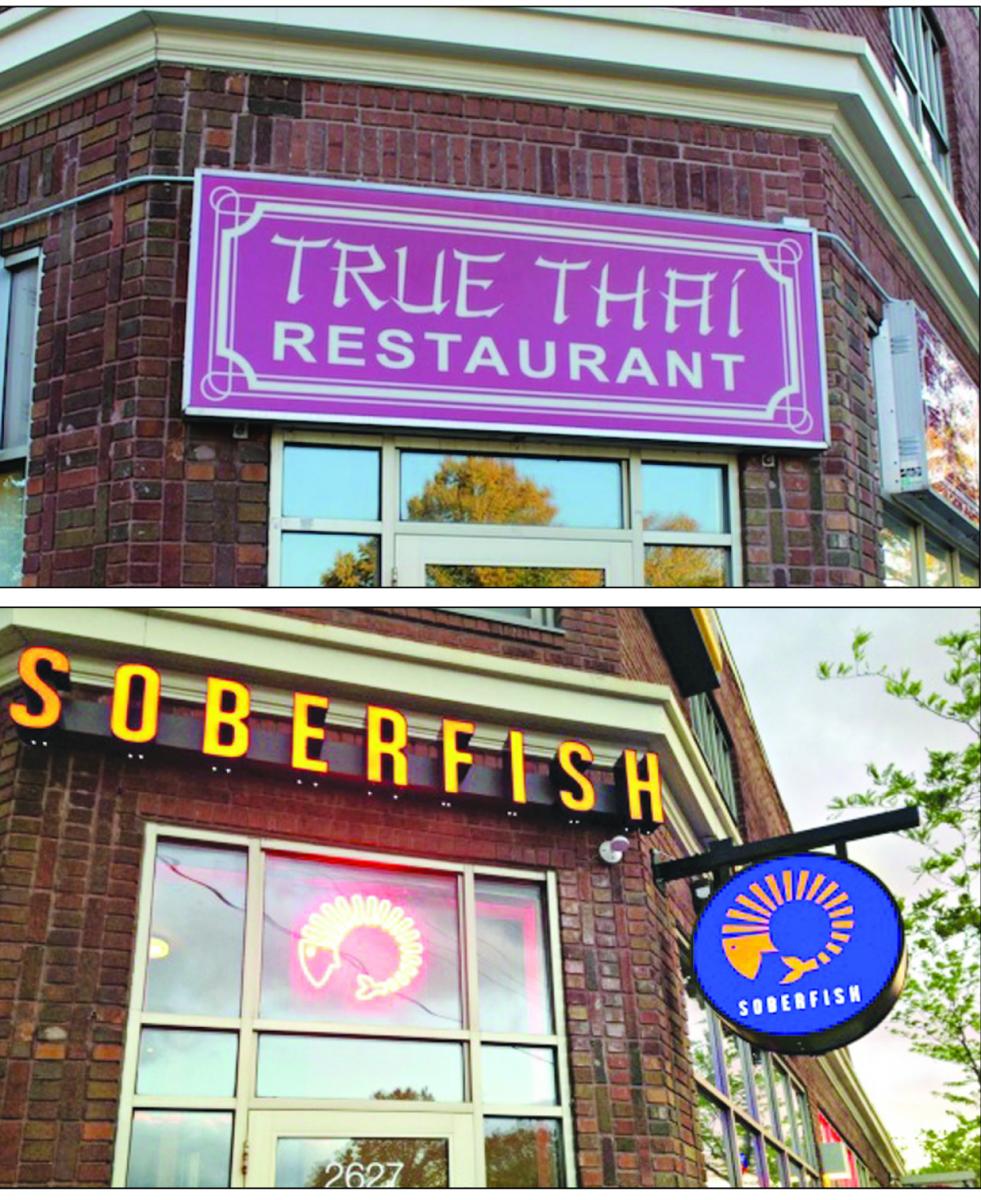 I have been a frequent visitor to True Thai for over two years and have always liked the food. The last two times I went they were out of several items on the menu. Tonight surpassed all bad experiences I have ever experienced in a restaurant. We were a table of eight people and began ordering appetizers. As food arrived and we began eating, it did not taste the same as before. We then ordered main courses, our favorite, the duck. We were informed that the restaurant had run out of the duck, which was disappointing in itself because this was their best dish in the past. We then ordered other items, and again were informed that they we out of the salmon dish. (what kind of restaurant runs out of food … at 7 pm …?) The server brought more appetizers and we immediately noticed that the beef appetizer looked and tasted completely different than usual. To top it off, the beef pieces were raw inside and the meat quality was bad. At this time they brought out the soup, which other people from my group said tastedlike water—flavorless. At this point, we asked for the manager. Fifteen minutes later I walked to the front desk to request the manager again. All of the sudden, a blond woman stormed out of the kitchen, came to our table and without greeting us or asking any questions to learn why we requested to speak with her, she proceeded to show us a half-raw, unsuccessfully cooked duck on a plate, saying, “This is why I cannot serve the duck to you.” We were a little shocked by this approach, so we explained to her that our experience was less than satisfying overall and that it wasn’t just about the duck. She was incredibly defensive about every single item, saying, “We changed the way we cook the meat.” This was by far the worse food and manager service experience I have ever encountered. We canceled the order, paid for the appetizers (yes, they charged us $30) and left. Not worth trying. Don’t bother. Bad cook and inexperienced, defensive manager. Enough said. 4/11/13

The two of us arrived at 6:15 this evening. Forty-five minutes later we were seated. The server appeared about 10 minutes later, was pleasant enough and took our entire order. The appetizers took half an hour. The food came out at 8:10. I asked for spicy, it was mild. The server did offer to bring out some crushed peppers, which I declined. Our water was refilled once in the two plus hours we sat waiting. I had to leave the table to refill them myself. The entrees were OK; the spring rolls were decent. We waited 15 minutes to get our bill and waited again to receive change. Slow slow slow, average flavor and a missing server. Thankfully we had a coupon so it was half price, which was still too much. Will not return. 4/14/13

They appear to have lost what first made them great. Unless tonight is exceptional in its mediocrity, True Thai is heading irretrievably south. They’ve lost their liquor license, at least temporarily, the Thai Iced Coffee was anemic, and the entrée was drenched in an uninspiring sauce with huge blobs of theoretically fried tofu. Again, the word anemic comes to mind. Insult to injury is that they’re cash or check only. Must be on the ropes which is sad for such a storied establishment. 9/08/13

“When True Thai closed in October, the restaurant’s owners posted a sign saying they would re-open. Five months later, they have filed for bankruptcy and a new Thai restaurant is planning to open in their South Minneapolis space. True Thai’s Feb. 24 Chapter 7 bankruptcy liquidation filing lists $578,000 in debts to banks and vendors and $3,100 in assets. The largest debts in the filing are: $275,000 to Western Bank of St. Paul; $80,000 to Glen Sandness Construction of Minneapolis; $40,000 to Vend Lease Co. Inc. of Baltimore; $40,000 to Toyota Motor Credit Corp. of Maryland.

“True Thai (listed as Tru Thai Restaurant in the court filings) is in the middle of a legal battle with a former manager Corey Whitchurch, whom the owners blame for their financial woes. True Thai owners, Charles Whitney and Anna Fiesner, say Whitchurch swindled them for $350,000, a sum they allege he gambled away. In a counterclaim to an unresolved lawsuit filed in August, Whitchurch denies allegations of theft and says Fiesner threw knives during a fit of anger.”

There’s a new restaurant at 2627 East Franklin, Soberfish (they started out wanting to call it Drunken Sake). Elle Kunsawat Lee and her husband Kou Lee own East Side Thai in St. Paul. Their sushi chef is Bruce Lee (no, not that Bruce Lee).

Let’s wish them the best and hope they bring back a community institution we can all love.