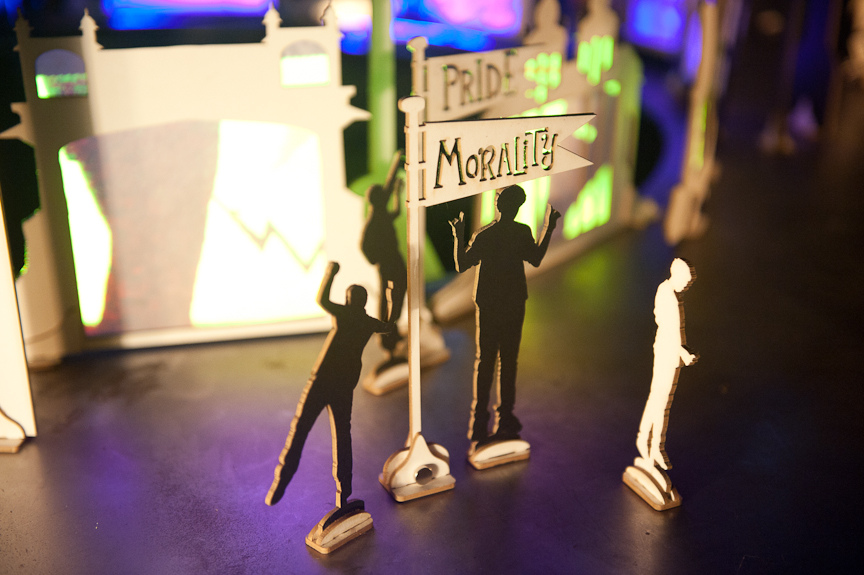 An element from The Battle of Everyouth, a work performed by artists Ali Momeni and Jenny Schmid with students from Washburn High School in 2011. Photo by Minneapolis Institute of Arts (Creative Commons).

What possessed a group of kids, earlier this month, to hang a black baby doll from the stairs of Washburn High School? What were they thinking? Why would they do such a thing? I’ve spoken to a couple of students at the school—students who not involved, but who know the kids that did it. They say it wasn’t racially motivated—that it was just a stupid prank, that the kids weren’t thinking about the connotations of how their action would be perceived.

That’s really difficult for me to understand, as I think it is for many of us. I basically had the same reaction that Keno Evol (a.k.a. Antoine Dukes) had. The African-American spoken word artist graduated from Washburn a couple of years ago, and now works as an artist in the school. “It’s messed up,” he said.

At the same time, Evol said it was important for us not to overgeneralize or to jump to conclusions. There are a lot of great things about the school, he said. It’s racially diverse, it offers hip-hop classes and works hard at its anti-bullying curriculum.

But how could this have happened? And even if it wasn’t “racially motivated,” if the kids really didn’t think of the race of the doll, it still doesn’t answer the fact that they thought it was funny to hang it by its neck.

When I heard the news of the incident, I immediately thought of a recent production by the Youth Performance Company. The production, a show about bullying called Mean, was in its third run this past fall. I went to visit a rehearsal for the show for a short piece I wrote for City Pages, and I spoke to a number of students who were from Washburn.

At the time of the production, there had been a series of cyber bullying incidents, in which a student (or group of students—they were never caught) were posting anonymous “burns” on other students. A Muslim student was called the cousin of Osama Bin Laden, for example, and words like “whore” and “dumb” were used. I spoke with a student named Maggie Cramer, who said the police who had come to their school and told them to stay off social media, advice that she and many others found unrealistic.

I spoke to maybe half a dozen students from Washburn that day, and overwhelmingly, they all told me that while they were aware of the cyber-bullying incident, bullying wasn’t really a problem at the school. The students that I spoke to, who were from a number of different racial backgrounds (all involved with theater), suggested that Washburn as a whole was a very open school.

I spoke with Cramer this weekend, and she says that she knows for a fact that it was not a hate crime. “They were too stupid to understand the historical significance,” she said. “They thought it would be funny that a baby would be hanging over everyone.”

Cramer isn’t looking forward to the upcoming meeting this Wednesday with parents and administrators. “It makes me not want to go to school,” she said. “I don’t want to go to an assembly saying we are all racists. We’re all being blamed. We all have to deal with the consequences of the act.”

According to Cramer, the whole situation was blown out of proportion. She believes MPS shouldn’t have sent out a press release. “Kids were so frustrated that media were at our school. It could have been easily handled quietly handled by our staff.”

Cramer would like a chance for students to share their opinion. “So far, they haven’t been able to without the administration and the media editing them.”

When I asked Cramer about the cyber-bullying incident that happened last year, she said that bullying really isn’t a problem at the school. Like the incident with the doll, it “doesn’t have anything to do with what Washburn is,” she said. “I hope parents don’t decide not to send their kids here.”

I called Jacie Knight, the artistic director of the Youth Performance Company, in the wake of this most recent incident to see if the theater had done any follow up given recent events. To me, while an African-American baby doll hanging as an effigy may not be directly bullying a particular person, to me it falls in the same category of hateful behavior.

Knight declined to be quoted, except to say: “I know that Washburn is a great school and a great supportive environment for all students—or at least that has been my family’s experience.”

Her son, who is African American, did feel comfortable speaking to the press, and in fact called T.V. stations to let them know that Washburn is a great school and that the media were blowing everything out of proportion.

Tobias Knight, who is in 11th grade, said he was upset that the media misconstrued what happened, and sent the wrong message of what’s going on. “Teenagers are impulsive,” he said. “They don’t know what they’re doing.”

When the kids found the baby in the auditorium—a prop that had been used in the freshman musical—they thought it would be a prank to hang it from the stairwell. “They didn’t see race,” he said. His good friend was one of the people involved. “He’s not racist at all,” he said.

Knight said that the principal needs to talk to the students about thinking before they act, to understand consequences for what you are doing. “We can get past this,” he said. “We’ve grown so much.”

As for Keno Evol, he doesn’t understand why the students thought it would be funny, but he hopes that what happened won’t take away from the positive things that are happening at Washburn.

Evol believes that no problem gets fixed when you put up barriers, and the thing to do now is to keep lines of communication open. He recommends that conversations happen in a circle, with no hierarchy, and that questions focus on growth, and on ensuring something like this doesn’t happen again. “It’s important not to generalize,” he said. We need to be investing in each other.”

I’m quite aware that while the people that I talked to felt the media blew the incident out of proportion and jumped to conclusions, and here I am, a member of the media, continuing to ask questions about it. I’m also aware that this column is being published on the weekend of Dr. Martin Luther King Day. I do not believe we live in a post-racial America. And while I might be able to give these kids the benefit of the doubt, that they weren’t deliberately trying to do a racist act, the fact that they didn’t know this is perhaps a problem. I agree with the decision of the Minneapolis Public Schools to send a press release, and I think it is wise to hold a public forum. At the same time, I hope they heed Evol’s advice as well: don’t just yell at all the students. Keep the lines of communication open. There’s room for growth here.

The community meeting is set for 5 p.m. on Wednesday, January 23, in the Washburn High School auditorium.