Although women have been supporting each other during pregnancy and birth since the beginning of time, the professional role of a doula is more modern. Doulas provide informational, emotional and physical support during pregnancy, labor and the postpartum period. Doulas typically work in homes, hospitals and birth centers, but since 2010, a special group of doulas has been working at the Minnesota Correctional Facility-Shakopee.

Isis Rising: A Prison Doula Project offers prenatal and parenting education to inmates and it provides a doula to those who want one. It is a project of Everyday Miracles, a nonprofit organization led by co-executive directors Mary Williams and Debby Prudhomme that works with expectant mothers at risk for poor birth outcomes.

Pregnant prisoners often fall into this category. Many of them experience mental and physical health problems as well as chemical addiction, which put them at risk for premature birth and delivering low-birth-weight babies. “We want to get these babies to full term,” said Erica Gerrity, project director for Isis Rising.

Gerrity, who is also a licensed clinical social worker, was volunteering at the women’s prison in 2003 and noticed what she called “a dramatic need” for services and support for pregnant women. She approached Everyday Miracles about sponsoring the prison doula project, and a few years later, the program was up and running.

The program includes a partnership with Rebecca Shlafer, an assistant professor of pediatrics at the University of Minnesota. Shlafer has been collecting data for Isis Rising for more than two years and has the statistics to prove its success.

Since 2011, 29 births were supported by Isis Rising doulas. None of those babies was born prematurely and none was a low birth weight. Only one was by cesarean section (3.4 percent), compared with a national rate of more than 30 percent.

Research has shown that premature and low-birth-weight babies are at a higher risk later for behavior problems such as attention deficit hyperactivity disorder (ADHD), Shlafer said. This makes Isis Rising’s results all the more important.

No matter what people think of women who are incarcerated, they are still going to be the primary caregivers of their children, Shlafer said. “By providing support for some of the most vulnerable mothers in society,” she added, their kids will have better outcomes in the long run. 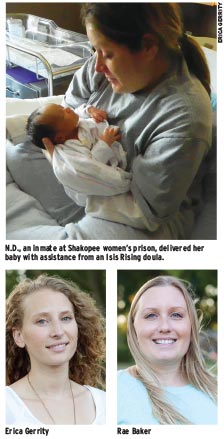 Doulas meet individually with inmates twice during pregnancy, and then meet them at the hospital for the birth. Inmates are allowed to stay with their babies in the hospital for 48 to 72 hours, and then the doula returns for what’s called a separation visit.

Although social-service agencies are occasionally involved, most inmates make arrangements with family members to keep their children until their release from prison, Gerrity said.

Doulas stay with the mother – who is often crying as her baby is taken away – when she is shackled and escorted back to the prison by guards.

“It’s a traumatic experience,” said Rae Baker, project coordinator and one of Isis Rising’s eight doulas. Doulas meet with moms postpartum two more times; they are not allowed to have any contact with them once the inmates are released.

Fostering a positive relationship between mothers and their children is another goal of Isis Rising, which provides two groups for women at the Shakopee prison.

One, for pregnant women and new mothers, offers prenatal education and information about the postpartum period. The other focuses on how to get mothers of children over the age of 1 to stay connected and build relationships with their children in the context of incarceration. Both groups meet weekly.

While some information is relevant to all new mothers, much of it is tailored to women in prison – how to deal with your milk coming in when there is no baby to nurse, for example, or how to co-parent with the child’s care provider. “We are helping them become more connected mothers,” Baker said.

On a larger scale, Isis Rising is working to lower the recidivism rate, Baker said. “We are hoping that these moms will come out and be better moms, maybe not make those mistakes that led them to prison and just be there for their child,” she said.

Gerrity believes all of society benefits when this happens. “I promise you that these children live in everyone’s community,” she said. “Do you want those children to be healthy and connected individuals? Or do you want them to be coming out of the same chaos and unhealthy environment that drove their own parent to get into this situation?”

Isis Rising has served approximately 250 women since its inception, and will expand to include inmates at both the Hennepin and Ramsey County jails this year. “Fundraising is our biggest challenge,” Gerrity said.

Despite that, Gerrity dreams big.

With more than 600 inmates, Shakopee is just one facility that houses pregnant women. There are many more in county jails, juvenile detention and treatment centers, as well as the federal prison in Waseca. Isis Rising hopes to ensure that every incarcerated girl and woman in Minnesota has access to a doula by 2020.

“I absolutely believe that every single woman, regardless of her place in life or the choices she made, has the right to have a healthy, positive birth experience for herself and for her baby,” Gerrity said.