Shortly after the tornado hit, I was quick to criticize several media entities for over-reporting isolated incidents of criminal activity.  I also promised to look into actual statistics to see if perhaps I was the one jumping to conclusions.  The city of Minneapolis and the 4th Precinct have made some data available – enough to do a preliminary examination of crime trends to see what things are like in NoMi.

First off, Ed Kohler at The Deets wrote an excellent piece about how we shouldn’t read too much into shot spotter map disparities.  Keep in mind that shot spotters are installed only in certain areas of the city, making the reporting higher in those areas than elsewhere.  Shots fired aren’t over-reported in parts of north and south Minneaoplis, they’re just under-reported in other areas.

Second, I’m compiling numbers based on visual recounts of maps from the city’s shots fired page.  One criticism of those maps is that they don’t actually show hard numbers, only dots.  When multiple shots are reported in a small area over a one-week period, it’s hard to be 100% certain how many dots one is counting.  So if my numbers are slightly off when compared with other data, that’s why.

With that out of the way, the shot spotter data indicates a slight uptick in reporting of shots fired recently, but numbers are down overall from last year.

North Minneapolis residents can tell you that as the weather warms up, more idiots and thugs come out on the streets and crime gets at least marginally worse.  That would appear to account for the increase in late April and early May.  In May, we saw 53, 46, 49, and 48 reported incidents of shooting, with the highest number in the first week of the month.

How does this stack up to a similar seven-week period of a year ago?

The similar 4-week period in 2010 had 60, 57, 52, and 51 reported incidents.  Even if one accepts the idea that the tornado and its aftermath contributed to violent crime, numbers are still down from a similar period in 2010.

It’s not all peace and love and rainbows and unicorns in NoMi though.  Here’s a map from the city of the path of the tornado: 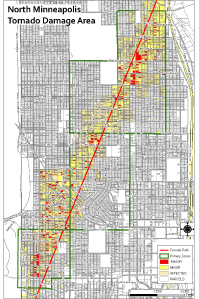 Contrast that with 4th Precinct Crime stats over the past week, and we do see a series of crimes that mimics the path of the tornado quite closely.  We don’t see the same pattern for the previous week or for the last week of May in 2010.

I’ve also tried to see what other studies might have been done regarding post-tornado crime trends.  The city of Joplin, MO compiles their crime stats monthly, and understanably they do not have May data up yet.

Finally, I believe one can unfortunately but reasonably expect some degree of burglaries or thefts in the aftermath of a disaster.  There will be some degree of scummy people who are willing to take advantage of the situation.  I’ve searched for studies on those trends, to see how north Minneapolis might stack up.  So far I’ve only found one study worth noting:  “Common Misperceptions About Disasters:  Panic, ‘The Disaster Syndrome,’ and Looting” by Erik auf der Heide.

The research is quite interesting throughout, but debunks even my preconceived notion from the paragraph above:

Another common belief is that disasters are usually accompanied by increases in antisocial activity, such as looting, price gouging, traffic violations, and violence. Even when looting is not actually observed, that fact is often attributed to the extraordinary security measures that have been taken rather than the fact that such behavior is inherently uncommon. Sometimes what is thought to be looting may actually be the salvage of disaster victims’ property by friends or relatives unknown to those observing this activity. Except in civil disorders and riots, increased criminal activity is uncommon in U.S. disasters. Generally, the amount of donated goods far exceeds that which could be looted in disasters. When looting does occur, it is usually carried out by outsiders rather than members of the impacted community.

At the same time, the fear of widespread looting has its consequences. For example, one reason people refuse to evacuate in disasters is to protect their property. It is also ironic that security measures undertaken to “prevent looting” can prevent residents from salvaging property that is exposed to the elements by the disaster. Finally, overzealous police and security guards manning roadblocks set up to keep looters out sometimes prevent the entry of legitimate disaster-response personnel.

In disasters, a greater problem for police than looting is the need for traffic control, so that emergency units can get to the scene and patients can get to hospitals. Law-enforcement personnel frequently are also needed to help with search-and-rescue activities. While a police presence will help to assure residents and business owners worried about looters, units should not be unnecessarily diverted from traffic or other emergency duties to deal with the presumption that massive looting will occur.

If readers have better ways to track post-tornado trends, feel free to share, but all in all things are looking pretty good for NoMi.  Even to the degree that there is crime related to the tornado, previous studies would indicate a likelihood that such acts are committed by people outside of the community.