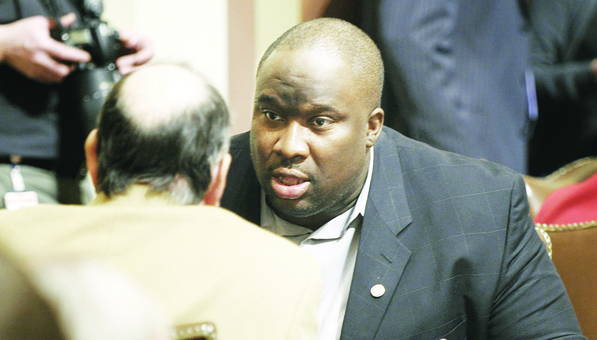 When the 2013 Minnesota Legislative Session convenes January 8, State Senator Jeff Hayden officially will assume his office as Senate Deputy Majority Leader. The Minneapolis lawmaker is believed to be the first Black in history to be named to a high leadership post.

Hayden told the MSR in an interview that Senate Majority Leader-designate Tom Bakk informed him of his new role November 14, nearly a week after the DFL became the majority party in both the Minnesota House and Senate in the Nov. 6 election. Hayden, Senator-elect Bobby Champion and St. Paul State Rep. Rena Moran are the only Black legislators in Minnesota.

“Having all three houses [of government: the House, Senate and Governor], we anticipate a lot of work,” says Hayden. “We put a big premium on making sure that our leadership was reflective of the state’s growing diversity.” He, Bakk and Senate President-designate Sandy Pappas will work to formulate the senate’s strategy for the 2013 session.

“We also do work in making sure…logistically where everybody sits [in the chamber], where their offices are, what [the] committee structure is, who is on the committee and what time the committee meets,” adds Sen. Hayden, who adds that he’s ready to get to work.

“We’re technically part-time legislators who come from all over the state with diverse backgrounds to make the laws, but today we really are full-time legislators…having to do it in half the time and getting paid part-time salaries,” explains Hayden.

“A state legislator represents about 79,000-80,000 people per district,” he continues. “Their job is to represent the interest of the people…to speak on behalf of the people they represent; to pass legislation, to vote on laws, to vote on all appropriations and vote on the state budget, on where the money will go and how it will be allocated.”

Another important legislative role lawmakers use is the “bully pulpit” to speak for their constituents. “We do a lot of defending…[of] the city and the people we represent…when people attack things that we think are valuable in our community. A lot of the time the work that we do really does go sight unseen, but it is really helping to defend, or helping to support, or helping to stop some injustice that is happening amongst people we care about.”

This often includes defending people not in his or her district. “We do a lot of work for the Black community all around the state, even though those folk may or may not live in our district. Because there’s so few elected officials of color… we’ve defended people in Mankato, St. Cloud [and] Duluth. There’s a lot of stuff that we never, ever get credit [for] — other than our voting record — for what we do on behalf of our citizens, especially citizens of color. We are spending a lot more time helping people.”

Hayden quickly admits that the current legislative session format is “based on the agriculture schedule — rooted when most people lived on farms and worked on farms,” and is now “obsolete.”

“It is still in the Minnesota Constitution, and that is how we must operate,” says Hayden, who predicts that their top priorities this upcoming session include raising revenues, implementing the Affordable Care Act and paying back the money borrowed from school districts.

He sees “a very progressive, comprehensive tax policy” that Hayden says will also include closing various loopholes. “There are a myriad of things that we will be able to propose…to help us put more revenue in the [state] coffers,” the senator points out. “We want to be able to do that so we can start to restore some of draconian cuts that have happened in the past.

“The second big thing we will be doing is implementing the Affordable Care Act,” Hayden says. “We’re behind on that because the Republicans refused to do anything. We’re racing to make sure that our system is available for 2014.

“The two million dollars we borrowed from schools [also] is at the top of our list to start to pay back,” says Hayden. “We just think taking away [money] from our kids for their education was not a Minnesota value.”

Sen. Hayden says with the DFL now in the majority, “It will be better for Minnesotans because we believe as Democrats that our value system is much more aligned with all the people of Minnesota. We are going to do things that really benefit everybody [and] not just business and the wealthy.

“We have to figure out how to be innovated, how to be smart…and still raise revenue, and still get this state moving forward.”