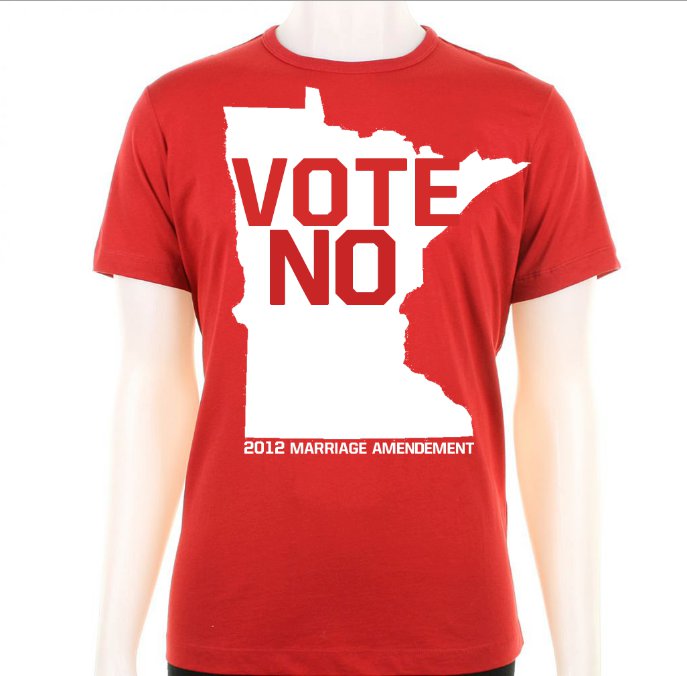 Because she’s going to want an explanation.

What do I tell my goddaughter is the reason that in the state of Minnesota where her godfather lives, they are pushing an amendment to the constitution through the legislature to put it on the ballot for the November 2012 election? A popular vote to decide whether our constitution needs an amendment that would define marriage as being only between one man and one woman, and thus outlawing gay marriage?

Because we already have a law on the books to this effect, correct? Minnesota already took care of that.

So what do I tell my goddaughter?

Why is it necessary to also add it to the constitution?

Why is it necessary to put the rights of a group of citizens up for a vote?

Because that’s what it is.

I heard a politician say that the good people of Minnesota are decent, caring, inclusive folks, and so they should be allowed to decide such a thing and not have the politicians or the courts decide it for them.

But this politician isn’t putting this amendment on the ballot because he thinks these good folks will reject anti-gay bigotry. He’s expecting them to embrace it, and enshrine the traditional, exclusive definition of marriage into the state constitution.

So what do I tell my goddaughter?

Is there a teeming horde of gays and lesbians storming churches and the offices of justices of the peace demanding to be married and wreaking all kinds of havoc?

I think someone would have told me.

Does this amendment help solve any of our state’s, or our country’s, current challenges?

Does it feed one hungry person?

Does it educate one child?

Does it put a roof over the head of someone who is homeless?

Does it help shrink the budget and pay down the deficit?

Does it bring one soldier home from the war?

Does it help business to create jobs for the unemployed?

Does it heal the sick?

OK, then what do I tell my goddaughter?

Because there has to be a good reason for it, right?

Because when I stood up for her parents and spoke at their wedding back in June of 2004, my goddaughter’s future mother and father didn’t want to have a political debate or make anybody uncomfortable. But when I asked them if there was anything they wanted in this prayer, the bride told me that she had many friends, myself included, who were not allowed to be married. She wanted them to be a part of this day, too, and she wanted people to remember that inequity still exists. We need to recognize it, we need to fight it. We need to not silently accept it as the way things are. We need to fight for the way things should be.

The wedding was in Taos, New Mexico, in the shadow of the Taos Mountain, a sacred Native American territory where non-Native Americans are not allowed to set foot.

So the wedding prayer began…

“God,
as we gather here in the sight
of the great Taos Mountain,
a sacred place we cannot go,
we celebrate the union
of Miriam and Jeremy,
and ask for your blessings
upon them –
that they may continue to find
in one another,
and in support from their
family and friends,
the things they have already been so fortunate to find –
laughter, acceptance,
forgiveness, safety,
patience, gratitude,
love and peace.
Hear us as we pray…”

and the wedding prayer continued, concluding with…

“Spirit,
as Miriam and Jeremy continue
the next chapter in their adventure together,
they are mindful of those who do not share the same rights and freedoms as they do,
including the ceremony we gather for today.
We pray for a world
in which there is no sacred space
where two people in love cannot go
to celebrate their union
with family and friends.
We ask that in this troubled world,
you offer hope for the sick,
the lonely, the outcast,
and comfort for the dying and their families.
We ask for peace in the world,
wisdom for our leaders,
and safety for those at war.
Finally, we ask individually
for the strength, understanding and love
we each will need
in order to leave this world,
and the people in it,
better than we found them.
All this we pray…”

This was the union into which my goddaughter was was born two years ago. These are her parents. These are their friends.

They asked me to be her godfather because they wanted me to be involved in her life, to be an influence in raising her.

So what do I tell my goddaughter about my adopted state? A state I moved to almost 20 years ago now to build a life. A state that has nurtured me and made me feel welcome and made me feel like the world was expanding and all things were possible.

A state that now seems to be telling me the opposite: that I am not welcome. That I am not the same, or as good or deserving, as everyone else who lives here. That the things which I am allowed and not allowed to do can be called up for a vote at any time. That my rights are not inalienable. That some pursuits of happiness are not to be tolerated.

What do I tell her when she asks me, “Why do you still live in Minnesota if they feel this way about you?”

Tell me, please, because right now I don’t have an answer for her.

What do I tell my goddaughter?

(I am sending this to every member of the House Rules Committee in the Minnesota Legislature, the only body who can still stop this thing from coming to vote in the House that will most certainly put it on the ballot.  I’m not feeling particularly hopeful, but I work with words, and I have to do something.)