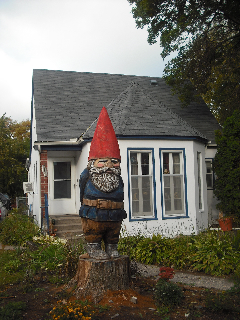 “Our gnome was born this summer on July 26th with a party of 25 to 30 people watching Curtis Ingvoldstad carve our tree with chain saws,” said Judy Rognli. “When our maple tree died I went looking for a carver but I did not expect that he would be this good.”

Her husband, Mike Hoyt, said, “I am surprised how much of a community draw this has been. We have people knocking on our door to ask if it is okay to take a pictures.” The gnome is located on Smith Avenue between Butler and Dodd Road.

“The sculpture should last 30 to 35 years. We will be 85 years old then,” said Rognli. “I had a 92 year old lady at church say that now that she has see this she can take it off her “bucket list.”

Curtis Ingvoldstad was afraid of being an artist for much of his life. “How would I to make a living?” he said. He initially followed in his father’s footsteps by going to engineering school. But two years into his studies, he stopped in to see the students’ show at the College of Art and Design at Iowa State.

“I saw a rendering of a dove delicately drawn coming out of a skull’s head. I was hooked,” said Ingvoldstad. “I came back to the Twin Cities and completed a bachelor’s degree in studio arts at the University of Minnesota. As I was learning the techniques of drawing and painting, I really wanted to do three-dimensional work.”

He was still hesitated to do this as a living but with supportive parents and a wife he has been carving commissions for ten years now. This past Saturday he was carving an owl on North Snelling near Bethel College for a lady who works at the Raptor Center at the University of Minnesota. His largest carving ever was 17 feet high. Cost is determined by height in feet; three to six feet is $150 per foot, six to 10 feet is $200, and 10 to 15 feet is $300.

“If properly maintain with sealers each year, carvings could last a hundred years.” said Ingvoldstad. “For first time carvers the best carving events happens at the end of February in Pennsylvania every year, called “Ridgway Rendezous.” It is an international event with 200 carvers, some of the best in the world. Many of the carvings done in the Twin Cities are by Dennis Roghair.”