Cook Nickolas Kimble, left, and barista Arik Xist work a shift Friday at Hard Times Cafe in Minneapolis. The cafe has been operating as a collective for 20 years. (Photos by Marisa Wojcik)

Customers at Hard Times Cafe will have to find an alternative hangout beginning August 1.

The 18 current owners of the longtime West Bank cafe have decided to temporarily close in order to install new flooring.

The coffee shop has survived several temporary closures over the last two decades and will be celebrating its 20-year anniversary this November.

The collectively owned cafe serves vegan and vegetarian food at 1821 Riverside Ave., during their regular 22-hour business days — from 6 a.m. to 4 a.m. — even on holidays.

Brian Monroe, the longest-standing owner, said the only reason they ever close the cafe is for periodic cleaning they can’t accomplish during the cafe’s daily two-hour downtime.

The flooring behind the barista counter needs to be torn out and replaced, which should only take two and a half weeks, Erica Johnson, one of the collective’s newer members, said.

In 2007, Hard Times closed to fulfill city inspection updates. During the process, miscommunication between the cafe and the city and additional city requirements led to a three-month delay in its reopening.

Monroe said he is not worried that will happen this time around, although they can’t be certain until they are able to see the condition of the century-old subfloor.

“It’s something we’ve wanted to do for a long time,” Johnson said.

Two years ago, the owners learned the city planned major road construction outside the cafe for this summer, Johnson said. Assuming this would slow their business, they decided it would be the perfect opportunity to make improvements to the space.

While some members are planning a vacation, Johnson said others will have the opportunity to work during the closure by helping with the project.

Though Monroe said the city did not order the repairs or the closure, Johnson said she felt the city would be happy to see the members voluntarily updating the property.

To show his support for the local business, Gordon holds office hours at Hard Times on the first Tuesday of each month. He said he enjoys the cafe’s convenient location, which is between the Cedar-Riverside community and the University of Minnesota campus.

Johnson said when she took classes at the University as a high school student, the cafe was the first place near campus where she found a sense of community.

Later, as a sociology student at the University, she quit her job at a corporate coffee shop near campus and joined the collective, because she said she wanted to work where employees had a say in how the business was run.

Though all of the founding members have since quit, the one thing that hasn’t changed much over the years is the cafe itself, said David Markle, a West Bank resident and 20-year cafe customer.

The business has remained a consistent, welcoming place for people at almost any hour of the day, Markle said, and it attracts a diverse group of people that is hard to find anywhere else. 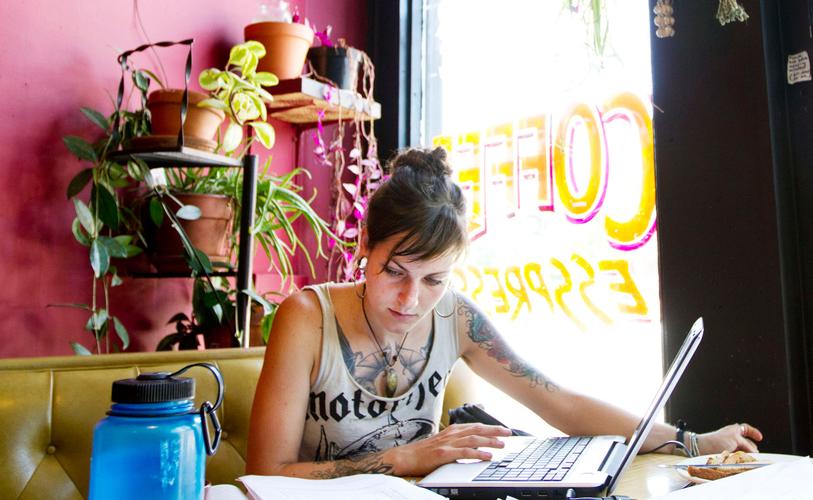 Ashley Majer, a nutrition undergraduate at St. Catherine University, studies Friday at Hard Times Cafe. Majer says she chooses to study there because she doesn’t “feel so alone when doing homework.”

The cafe passed through several different hands before a group of people started collective ownership in 1992.

Peter Dodge has owned the Hard Times property since 1984. Between 1987 and 1992, three different cafes were housed there, including Urban Peasant — the Hard Times Cafe’s predecessor.

That day, Dodge shut down the restaurant while several Urban Peasant employees were still working. He said they approached him and asked what they were supposed to do now that they didn’t have jobs.

Dodge said he would give them a week to round up paperwork needed to legally run a business. They came back with a license for Hard Times Cafe and decided to run the restaurant as a collective.

Past and current members throw a party every year on November 17 to commemorate the formation of the collective.

Johnson said it’s easy to spot former members at the party because they “seem so proud of the place. They’re so excited to see that it’s still going and that it’s evolving,” she said.

Now, Dodge said he still sees some of the original members around town and has maintained friendships with them.

“I’ve got great respect for these kids,” he said.

An issue with the city

The cafe entered a year-long licensing battle with the city in 2000 after an undercover cop purchased drugs from cafe guests and a cafe owner.

Dodge said he felt that, in the past, the cafe had a reputation for attracting trouble. But he said though the cafe dealt with the problems in the area, it did not cause them.

Gordon said at the time there was concern the cafe attracted homeless people, youth and people wandering around after bar close.

He said having a business that provides a safe place for people to go almost 24 hours a day is an asset to the community.

Between 2007 and early July 2012, 206 police calls were reported for the 1821 Riverside address. Monroe pointed out many of the calls are related to vehicles in the neighboring parking lot, which is owned by the city.

Bar noise or people wandering in from the freeway can occasionally cause issues, Mungavan said, but he doesn’t hear complaints about the cafe.

“I try not to let the number of 911 calls trigger any kind of negative action because we want people to call 911,” Gordon said.

Not leaving any time soon

Monroe is the only remaining member from before the closures in 2000.

“People couldn’t live through that, so people found other jobs,” he said.

New members are an asset to the group, though, because they bring fresh perspectives and have different areas of expertise, like setting up the Internet for the cafe or experimenting with menu items, Monroe said.

For Monroe, though, even major changes cannot take away from the cafe he has known.

“I feel like if I just disappeared off the face of the earth, it would still be here in 20 years,” he said, “And I’d probably still recognize it; it wouldn’t be much different — maybe the color would change and the floor would probably be shinier.”