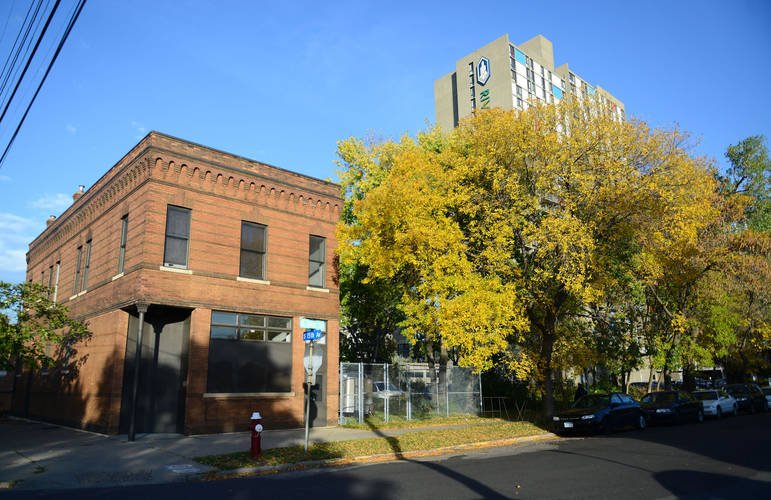 The city proposes a new six-story apartment complex on the corner of 6th Street South and South 15th Avenue. Building Five15 on the Park would destroy the historic Gluek saloon building. (Photo by Holly Peterson)

Cedar-Riverside and the city of Minneapolis are resisting an apartment complex proposed for the neighborhood.

Residents say the project, called Five15 on the Park, could increase parking issues, and the city wants to preserve a historic building on the site. Minneapolis-based developer Fine Associates LLC has been working on the project since 2005. The $51.6 million project would add 256 units of mixed-income housing to a vacant lot between Riverside Plaza and 15th Avenue South.

Jim White, an associate with Fine, said his firm has consulted with community organizations in the area each time the project reached a new stage.

“We’ve sat and talked for hours,” he said. “If the project evolves, you have to come back and tell them those things.”

The firm hasn’t been as receptive to issues raised by residents as it claims, West Bank Community Coalition Executive Director Hussein Ahmed said.

Because White attended WBCC meetings when Fine first proposed the project, the neighborhood organization wrote the company a letter of support.

The letter stipulated that “ongoing neighborhood dialogue about the plan as it evolves” would be necessary, but Ahmed said Fine Associates hasn’t met that condition.

Cedar-Riverside residents use the road on the proposed development site to access Currie Park and the Brian Coyle Community Center on the other side of 15th Avenue South, Ahmed said.

When residents approached the developer about the road, Ahmed said, Fine Associates confirmed it would close when construction began.

“We decided that we had to go to the city,” Ahmed said, because many elders, children and people with disabilities use the road as a major path to the community areas.

The city sided with residents, telling Fine it couldn’t block the road since other parties owned parts of it, Ahmed said.

White said the road was a concession Fine needed to make to the community in order to move on with the development.

“It was a missed opportunity for that project to create a positive relationship with the neighborhood,” he said.

Haila Maze, principal planner for the city, said the conflict over the road was one of several obstacles that have complicated the development in recent years.

“It’s lasted longer than most projects,” she said.

Most recently, Fine and the city have debated over a century-old building on the proposed site, formerly home to a saloon run by the Gluek Brewery.

The Minneapolis Heritage Preservation Commission rejected Fine’s request in September to raze the building for Five15 on the Park. This has further stalled construction, but Fine is appealing the decision to the Minneapolis City Council.

If the City Council overturns the commission’s decision and Fine Associates builds the complex according to current plans, half of the apartments will rent at half of market rate, while the remaining half will at full market rate, White said.

Mungavan said the WBCDC hasn’t officially taken a position on Five15 on the Park, but the plans have improved over time.

Mixed-income housing is better for the neighborhood than more upscale options, he said.

“We want them to be our customers as well as neighbors,” he said.

High-density housing near the light-rail station could allow residents to commute without a car, White said, a trend that he hopes will minimize effects on the area’s already crammed parking situation.

The project’s location near the University of Minnesota and other local employers also makes the development appealing for those who work in or around the West Bank and want to bike or walk to work, he said.

But residents are still uneasy.

“Development is welcome here.” Ahmed said. “We like it, but we also have needs.”