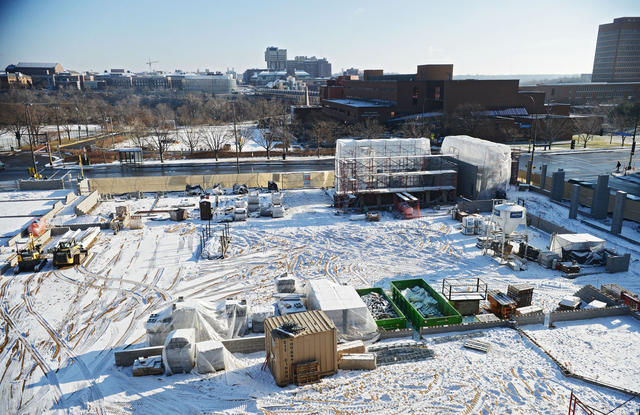 The 7west Apartments under construction near Seven Corners Saturday on West Bank. The new apartments will be LEED-certified. (Photos by Emily Dunker)

While University of Minnesota students prepare for finals, developers Robb Miller and Curt Gunsbury are doing homework of their own.

The pair is pursuing Leadership in Energy and Environment Design certification for their latest luxury student housing complex, 7west, which is currently under construction near the University’s West Bank. It’ll be the first apartment complex in the University District to achieve LEED certification, a designation for buildings designed to reduce waste, conserve energy and reduce greenhouse gas emissions.

Compared to their other developments, pursuing this environmental standard presents a lot of additional work, Gunsbury said.

Green roofs, composting, energy-efficient lighting systems and rain barrels are some of the environmentally conscious features to be included in 7west.

While many developers claim to include green features in their projects, Gunsbury said LEED certification is a way to back up those claims.

“People talk about green, but they don’t really do it,” he said. “I think that many of the projects going up around the U don’t have those elements in place.”

The cost of certification

“It costs money to get that stamp of approval,” Miller said.

Developers estimate the process will only add between 1.5 to 2 percent to the construction cost of the building. But because it’s a $24.5 million project, Gunsbury said, that’s “a big number.”

Emily Stern, senior project coordinator for the city of Minneapolis, said the high price of LEED certification drew major criticism during its inception in 1998.

Since then, she said, the increased availability and affordability of sustainable materials has reduced these costs, especially for minimum levels of LEED certification.

In the end, for Miller and Gunsbury, the certification is worth the price.

“We want to show through this LEED certification that we’re making a long-term commitment,” Gunsbury said.

To LEED or not to LEED

Despite the advantages of LEED certification, few campus developments pursue it.

“It’s very expensive, and you don’t get that much more than we already have,” he said. “You don’t have to pay for that extra certification.”

He said his company works with Xcel Energy to reduce energy use.

“I think the danger in not having a certification or firm standard,” she said, “[is there’s] a lot of developers or building-owners that are marketing their projects as green without any or, in some cases, without a lot of merit behind it.”

Mark Leutgeb, spokesman for the Minnesota chapter of the U.S. Green Building Council, which oversees LEED certification, criticized many developers for using green design as a selling point without third-party verification like LEED.

He said the decision to go for LEED certification often comes down to the nature of the building. Institutions, he said, have more incentive to invest in a sustainable design.

“If you’re a developer, for instance, you may build a building, and in a year, you may sell it to somebody else,” he said. “So you’re not going to realize the long-term value of doing this.”

Miller said the developers’ plan to own their building long term made them more willing to invest in sustainable features.

According to USGBC, the operating costs for LEED-certified buildings drop nearly 14 percent and building value can increase by as much as 11 percent.

“There’s a benefit to us to have sustainable designs in our buildings,” he said, “because there’s an upfront cost that gets paid back over time.”

7west will sit on a plot previously occupied by a public parking ramp.

In 2007, the city sold the ramp to a developer with the condition that whatever was erected in that space would be LEED-certified, Stern said.

According to Miller and Gunsbury, who later bought the space from that developer, the certification was appropriate for what they were already envisioning for the plot.

“We were planning to, anyway,” Gunsbury said. “That’s kind of what the neighborhood wanted to see, and so I think for us it was a pretty natural fit.”

He said the pair had experience in sustainable design through previous projects. Gunsbury is the owner of Solhem Companies, which developed Stadium Village’s 2011 addition, Solhaus.

In order to gain certification, they considered factors like maximizing natural light and minimizing waste.

They worked with a LEED consultant to document their efforts. When the building is completed in 2013, LEED will review and asses 7west’s work and award the project a level — certified, silver, gold or platinum — of certification. 7west is going for gold.

Gunsbury said the real benefit of LEED is the verification of green standards.

“The LEED certification process formalizes that, wraps it all up, ties it with a bow and adds verification to it that otherwise we don’t really have,” he said.

7west will offer 213 studio, one- and two-bedroom apartment units to attract University undergraduates, graduate students, faculty and hospital employees who work nearby.

Rachel Redmond, a psychology senior, said she thinks the green features will attract students as long as the price is right.

“Affordability is always an issue,” she said.

Units will start at around $995 a month, according to online listings. 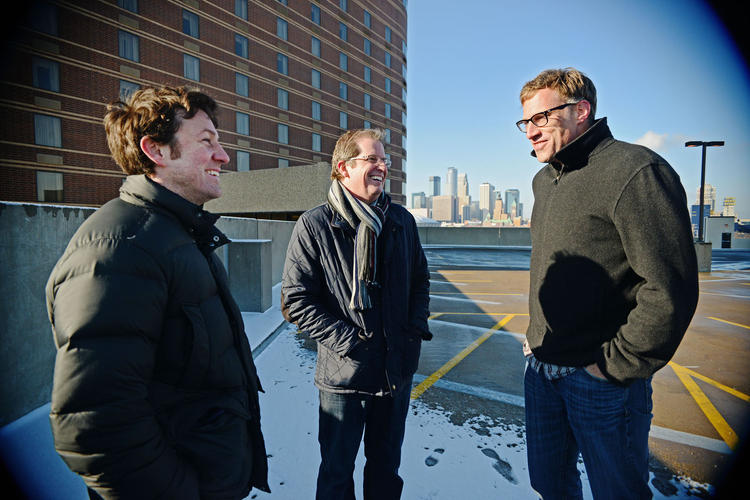