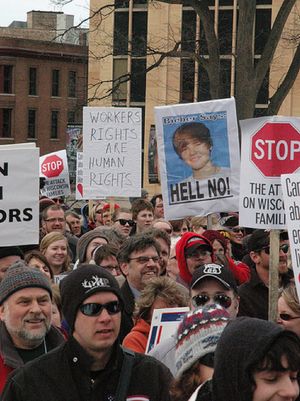 The unrest in the Midwest, with labor and its allies rallying thousands to state houses in Wisconsin and Ohio, prompted my friend AudraLynn to post a joke on Facebook:

Q:What is the difference between a Tea Party rally and a Union rally?
A: The signs are spelled correctly.

Is the 2009 and 2010 fire in the belly on the right gone in the North Star state?  Governor Mark Dayton released some of the steam from a group of Minnesota’s Tea Party activists in early January when he demonstrated that the Old Testament notion that a soft word turns way anger.

Since then, state Tea Party activism has been muted. The Minnesota Tea Party Patriots held an organizational visioning event at the end of January (covered by a local “community” writer for the Washington Times, a piece notincluded in the venue’s Nexis content). Bradlee Dean’s “My War” was the feature film for the Southwest Metro Tea Party; Talk radio nutter Sue Jeffers will speak to Wright County Tea Party Patriots at the Buffalo Airport Community Room on March 1. The Rochester TPP sent out an email about why the local civic center shouldn’t be included in a bonding bill.

There’s no chatter about big rallies coming up; the base isn’t rallying to the capitol to goad the new Republican legislature to complete the TPP agenda. Friends on email lists are getting “save the day” notices for big demonstrations beneath the dome for liberal causes–they’re reporting nothng yet for the Tea Party. April 15, the classic day for Tea Party rallies, is less than two months away. Tweets? Not much.

At the “Original Tea Party of Minnesota” site, blogger and activist “Twice Blessed” urges a rally on March 7  but notes she doesn’t know how to plan an event:

We need to organize a metro wide rally at the Capitol.  Unions are not going to go quietly into the night and will fight pension and benefits reform.  We need to make our voices heard to state legislators that cutting spending is the only solution to balance the MN state budget.  We cannot let the momentum in MN from the 2010 elections die down.  We need to hold their feet to the fire and not let them cave to public pressure from those living off the government coffers.

I have no idea how to coordinate this.  If we set a date when they are in session and take over the rotunda, how does that work?

The paucity of coming attractions contrasts sharply with the list of happenings in Toni No Bologny’s rally calendar, which included 48 past events for 2009 and 2010.  Moreover, the general inactivity online of a movement which used the Internet for organizing may also signal that the movement may no longer have a vital grassroots presence–or that activist energy isn’t being harnessed to support the candidates it elected.

Will liberal and progressivee  Minnesotans heading to Madison to support the popular unrest against Walker return energized, the Gopher Egyptians following the example of Tunisian Badgers? Will the tea partiers whistle in the wind again? Bears watching.

Equally worth observing: should the activist left  roar back out of its Wisconsin road trip, will the Twin Cities media continue to pimp the local tea party sneezes, while downplaying mass rallies on the left? The contrast between coverage of diminished (from 2009) tea party rallies in 2010 versus that of a thousands-strong pro-CIR, anti-SB1070 march last spring was startling.

Related post from 2010: Greater MN Tea Party Pooper digest: A roundup of rally coverage from across the Gopher State.

Photo: One of “The 45 Best Protest Signs At the Wisconsin Capitol.”  H/t to former Hudson WI resident Dan Feidt.