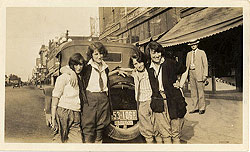 Rowdy girls on Franklin Avenue in 1929 during Prohibition

It wasn’t so long ago that Franklin Avenue was the Skid Row of Minneapolis. It was a dangerous place with wall-to-wall bars and liquor stores. Today it looks sleek and modern and as safe as a suburban shopping mall.

Perhaps the one event that changed the character of Franklin Avenue and made improved development possible was the elimination of the Liquor Patrol Limits by the City Council in 1975. This gradually moved all the liquor stores and bars off Franklin to other neighborhoods throughout the city.

The City of Minneapolis, early in the 20th Century, had decided that liquor should only be sold in an area that a police officer could patrol on horseback. Horses need to be fed every couple of hours, and, since the stables were just south of downtown, that meant on-sale and off-sale liquor licenses could only be sold as far south as Franklin Avenue.

During Prohibition, police officers turned a blind eye to the speakeasies and drug stores selling liquor. After Prohibition numerous bars and liquor stores opened. The vice that had been kept under wraps started walking the streets. R.T. Rybak’s family owned a drug store on Franklin Avenue near Chicago Avenue. His mother continued to run the drug store after his father died, and she was robbed three times at gunpoint.

The neighborhood had changed. It didn’t change back until very recently. Today Franklin Avenue is the proud Main Street of the South Minneapolis Native American community. And that is a wonderful and welcome change.