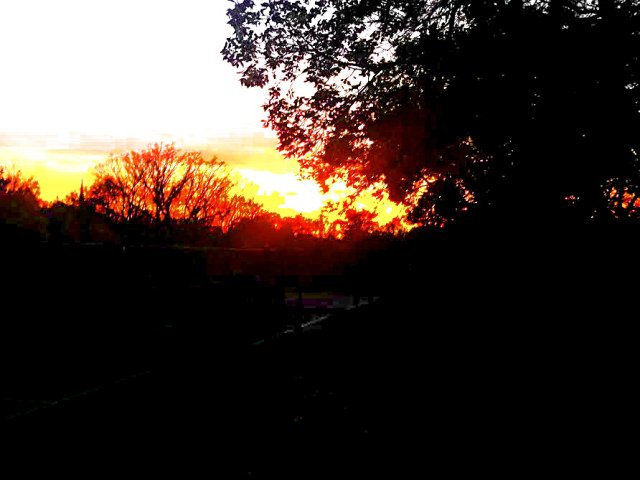 Long, cold winter–all is forgiven! I can’t stay upset about the weather in Minnesota when the autumn has been so amazing. Yesterday at dusk the street by my house flooded with variegated colors of pumpkin orange, peach and pink. I enjoyed the horizon over the College Park tennis courts as I walked to catch a bus. I was joining friends for a visit to the Weisman Art Museum (WAM) at the University of Minnesota. Last night WAM threw a party called Wanderlust, a celebration of their fall exhibitions that all focus on travel whether by train, custom bike or imagination. 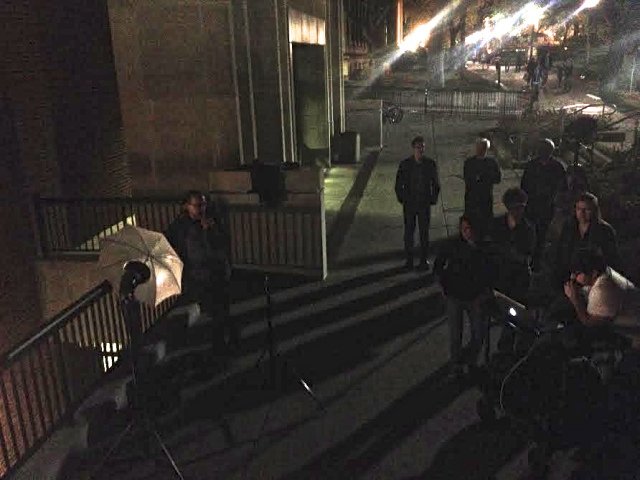 We got off the bus by Northrup Mall and saw strobe lights flashing. The view from one of the pedestrian bridges gave us a glimpse of photographers from the Art Department working to photograph a METRO Green Line train in the darkness. The inspiration is the current show of photos Trains that Passed in the Night: The Photographs of O. Wiston Link. A pioneer of night photgraphy in the 1950’s, Link also documented the last days of the steam locomotive with his stage lit photos of engines puffing by in the night. 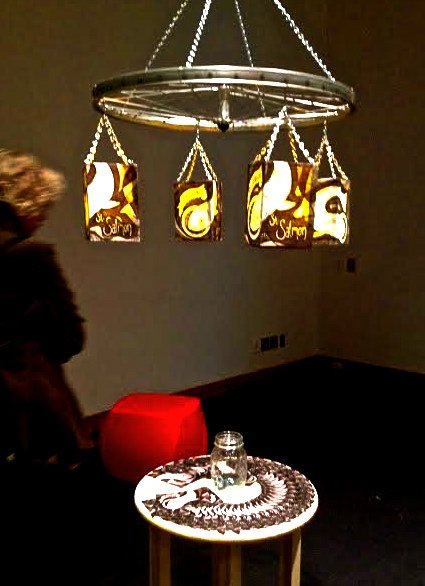 We checked in for drinks and hors d’oeuvres in the lobby where there was live DJ music, a giant photo printer standing by to print the large format image of the Washington Avenue lightrail train after dark and several other intriguing art happenings. We were tempted to take a trip with Roger Niebor’s EXISTENTIA, a performance art travel agency that promised to help one devine life’s destination after a consultation. However we bypassed that in favor of the Cycle Saint shrine, an art work by Jessica Zeglin, a much quicker way to make a deep connection with one’s personal cycle saint. Mine is St. Salmon (for endurance) and I have a souvenir spoke card to prove it.

The bicycle theme relates to the gallery show Anishinaabensag Biimskowebshkigewag (Native Kids Ride Bikes). The seven bicycles that were created by artist Dylan Miner with students and urban native youth are the product of workshops that sought to impart sacred Anishinaabeg teachings and values along with Métis and Cayuse knowledge to the youth participants. The bicycles are shiny, beautiful and accesorized with materials and symbols that call to mind native dance regalia. 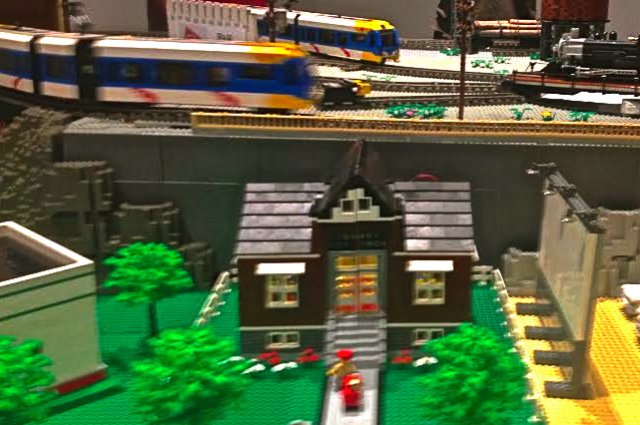 There was also a super charming Lego display inspired by O. Winston Link photographs put together by the Greater Midwest Lego Train Club and Twin Cities Lego Train Club. It featured a working train track and light rail running through a townscape that included scenes from Link’s photos such as a station houses, rural settings and a drive-in movie. (Next on our list is a visit to the Minnesota Transportation Museum’s Jackson Street Roundhouse, where this train exhibit will move to next.) 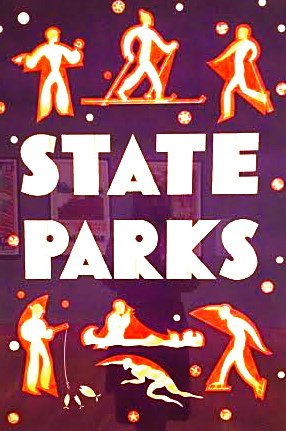 The third show to see at WAM is Lust for Leisure a collection of beautiful travel posters from the 1920s to 1940s. I caught my own reflection in this poster for winter activities in state parks by Dorothy Waugh (1935). Waugh is noted for her minimal palette of colors and bold typography. This particular poster was printed using the photo-offset process, quite innovative at the time. I love the papercut sihouettes in cold weather action modes.