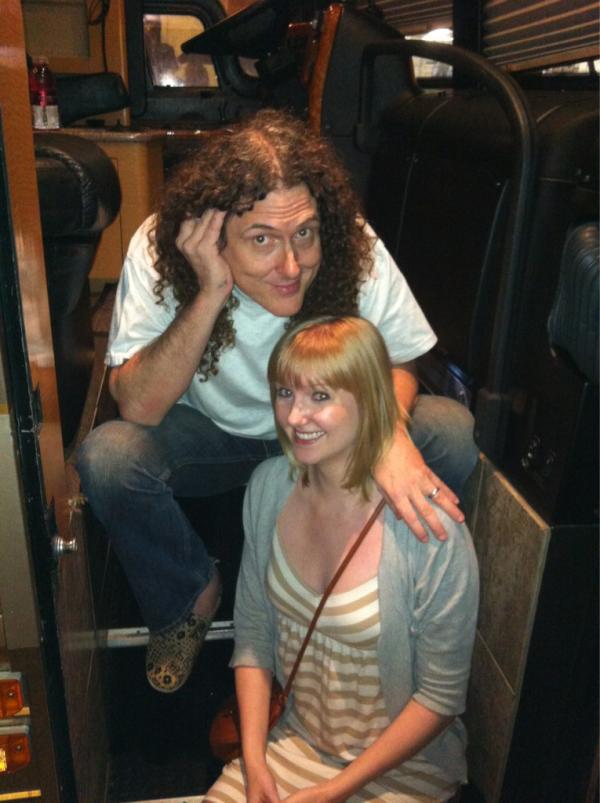 “Weird Al” Yankovic brought his high energy tour to the State Theatre on May 3, although I’m not sure I’m the right person to be writing about it.

You see, my mom bought me my first Weird Al ticket when I was thirteen. Dad drove me from western Nebraska to Denver for the show, I assume because he lost a heated battle of rock-paper-scissors with my mom over who was going to accompany their minor. That was 12 years ago. Since then I’ve traveled the globe, earned two-and-one-quarter English degrees, made friends and enemies and exes and art and love and an adult life. But still to this day I will, with absolutely no provocation or concern for the disinterested, sing you the entirety of “Amish Paradise” whilst flushed with pride.

A little of both. But my partiality toward Weird Al has been fine-tuned over the years, slowly stripped of the unabashed euphoria with which I’d sit and listen to his albums over and over as an adolescent. What was once unchecked teenage adoration has become sincere respect, and if his show at the State proved anything, it’s that he damn well deserves it.

I would argue that there are striking similarities between a Yankovic performance and one by, say, Madonna. Both pentagenerians explode with energy befitting someone half their age, change outfits almost as many times as they change songs, and pelvic thrust with reckless abandon. But where the latter is a behemoth of earnest and influential pop music, the former opened his show with a polka medley of popular contemporary tunes off his 2011 album Alpocalypse that practically screamed feel free not to take any of this seriously! Really!

But his fans are seriously dedicated, and Yankovic is seriously entertaining. The two-hour set was a grab bag of new hits and old favorites, from his Lady Gaga parody “Perform This Way” to his 1992 parody of Nirvana’s “Smells Like Teen Spirit” (during which he gargles a mouthful of water because the song is about how difficult Kurt Cobain is to understand). The suggestive “Wanna B Ur Lovr” was a crowd favorite: it has replaced “One More Minute” as the song during which Yankovic slinks through the audience, crooning at red-cheeked women as he sits in their laps. It is an original, one of only a few Yankovic treated us with, which is a bit of a shame. While I can understand the benefit of favoring his more popular parodies, it is undeniable that Yankovic’s cleverest work is his original songs.

But thankfully he left the hardcore devotee little with which to be disappointed during his long medley mid-show, largely comprised of old favorites. Snippets from songs like “Spam,” “My Bologna,” “The Rye or the Kaiser,” and “Lasagna” topped off with a good chunk of “Eat It” not only had me and the older members of the audience singing along happily, they also made me realize geez, this guy really does write a lot of songs about food.

I of course appreciated the older tunes more than the newer ones, which I initially chalked up to just being more familiar with his earlier work. But as Yankovic rocked out to “Canadian Idiot” (“American Idiot,” but with way more beer and hockey jokes), I realized that perhaps I favor work prior to his 2003 album Poodle Hat because the songs he’s parodied since then are fresh enough for me to respond with things like, “Eew, Miley Cyrus. Ick” (“Party in the CIA,” from the newest album). If my theory is correct—and I’ll have to check back in with you in another ten years to be sure—then Yankovic parodies age like a fine (weird) wine: they get better and better as we slowly forget how little we liked the original songs.

Since Yankovic has about a dozen or so costume changes throughout the show, between songs the audience enjoyed various video clips, mostly from his popular online series Face to Face with “Weird Al” Yankovic (using old interview footage, Yankovic splices together fake interviews with big stars, the result of which is never not hilarious). But I found myself even more entertained by the collection of clips from a variety of movies and TV shows in which Yankovic is mentioned in some fashion, be it positively or negatively. Taken holistically, the clips represent just how pervasive Yankovic has been since the early 80s. Given the pride with which he displays the whole range of them at his live shows, I’m not sure any artist is quite as self-aware of his specific place in the cultural milieu as Mr. Yankovic.

The audience cheered and clapped during the clip from How I Met Your Mother in which Ted Mosby, a Weird Al fan, tries desperately to get one of his friends to accompany him to a concert, all of whom refuse. Futurama’s Fry sneered at Yankovic’s frozen body in a time capsule. Hank Hill told his son Bobby that Yankovic committed suicide in the late 80s after people stopped buying his albums. All the while we are cheering and laughing, because if anybody was in on the joke, it was the 2,000+ people packed into the State. You’d miss the hell out of Weird Al, pop culture. The sentiment was succinctly expressed by Homer in a clip from The Simpsons: “He who is tired of Weird Al is tired of life.”

After waiting in line for an hour with a gaggle of fans ranging in age from 4 to 64, I got to thank Yankovic for being such an important part of my growing up. “I’ve waited eleven years to meet you,” I said. “Well why did you wait that long?!” he asked, looking surprised. Good question, Al. Very good question indeed.