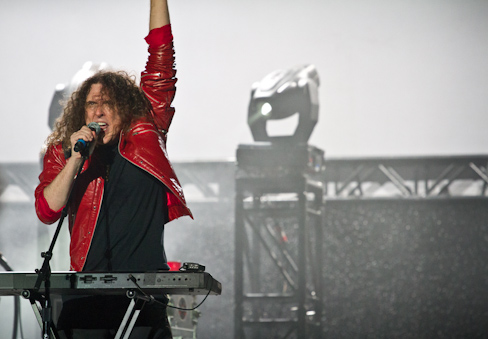 No one works harder on stage than “Weird Al” Yankovic. He said his concert was going to be a high energy, multimedia show with lots of costumes. And he wasn’t exaggerating. It was like ADHD on a stick.

“Weird Al” performed on the outdoor Grandstand Stage at the Minnesota State Fair Wednesday night to a crowd of just over 7,000. After smashing his guitar onstage, Yankovic faced the audience and said in his Homer Simpson voice: “He who is tired of Weird Al is tired of Life!” to a resounding cheer.

The audience was having fun, which seemed to be Yankovic’s intent. Constantly playing to the crowd, there was nothing phony about Al’s love of his fans, and they loved him back. A PG-13 rendition of “Wanna B Ur Lovr” with Elvis-gyrating hips was a favorite. Yankovic jumped off the stage in a red and black zebra leisure suit, walking among the crowd, telling them he was going to wiggle his booty in their faces, while crooning “I wish I was cross-eyed, baby, so I could see you twice.”

Yankovic’s strict vegan diet has paid off with a trim physique at age 51, so he was still able to pull off  his Kurt Cobain parody “Smells Like Nirvana” with grunge clothes, blonde wig and mannerisms. He gargled water and sang with authentic Cobain yowls.

A man behind me was singing along with Yankovic’s Devo parody “Dare to be Stupid” and was hushed by his friend. He replied, “We’re at a Weird Al concert, dude, at the State Fair,” which seemed to summarize the entertaining evening.

During costume changes, the stage’s three constant multimedia screens were an event in themselves, showing hilarious clips from Al TV interviews with the likes of Jessica Simpson (“Your lip gloss is blinding me”), Celine Dion, Snoop Dogg, Madonna, and others. Seeing those oddball, fake interviews spliced together with Yankovic’s biting remarks were even more fun on tri-screens with a great sound system. One forgets how funny and poignant his humor is. 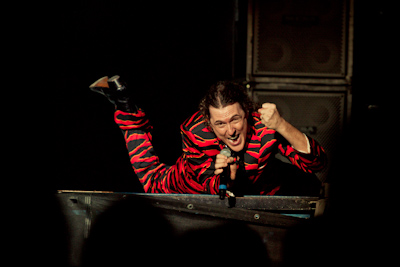 (Above) Yankovic’s “Wanna Be Ur Lovr” put him in the audience.

Yankovic’s speedy, fleet-footed costume changes were incredible. One set, he started with a sequined-gold disco shirt, parodying James Blunt’s video “Beautiful.” In Blunt’s video, he takes off his clothes. Yankovic did a clever imitation of that by singing a dead-ringer spoof of Blunt called “You’re Pitiful,” pulling off shirts to expose other shirts. Under the gold shirt, he revealed a wolves t-shirt, only to take that off to reveal an “Atlantic Records Still Suck” t-shirt, then a SpongeBob t-shirt, and finally exposed a tutu and red-heart boxer shorts when he pulled off his pants.

I was surprised at what a good voice Yankovic really has. I have always focused on his parodies, but at his concert last night, his rendition of Broadway and “Speed the Plow” starring “Skipper Dan,” I thought: He’s got a decent signing voice and his Skipper Dan set showed off his vocal talents.

Another example of Yankovic’s singing ability was his Doors set and imitation of Jim Morrison. In fact, Yankovic’s entire band was impressive in that song. The three screens displayed 1960s graphics and psychedelic images while he sang “Craigslist” (“Do you want my Styrofoam peanuts”). It was one of my personal favorites of the night.

Yankovic didn’t disappoint die-hard fans with a full-throttle “Eat It,” complete with Michael Jackson attire. The crowd went wild when he entered the stage on a real Segway and burst into “White and Nerdy.” The Billy Joel “Piano Man” parody “Ode to a Superhero” poked fun at movie hero Peter Parker (“Sling us a web, you’re the Spiderman”). Short pants on Yankovic and the band for “Amish Paradise.”

Other song melodies and fast-clips were “Beverly Hills,” “eBay,” “Trapped in the Drive-Thru,” “Gump” (with fun clips of Tom Hanks from the movie Forrest Gump), and “Another One Rides the Bus.”

Yankovic’s “Fat” was pure genius. For the knock-off of Michael Jackson’s “Bad,” he appeared on stage with a fat suit along with added face prosthesis and a black multi-zippered jacket and punched out a fake Santa Claus (“ho, ho, ho”). Donning a Gilligan’s Island hat, Yankovic had his fans in ecstasy with “I’m In Love with a Skipper.”

Minnesota being next to Canada meant that Yankovic’s hilarious “Canadian Idiot” with its mega maple leaves on the screen hit close to home; the performance featured the firing of red and white streamers into the audience.

Al’s humor also touched on modern politics with lots of cheering when he sang a parody of Usher’s “Confessions Part III” and sang “sometimes I like to dress up like Shirley Temple and spank myself with Sarah Palin’s hockey stick.” 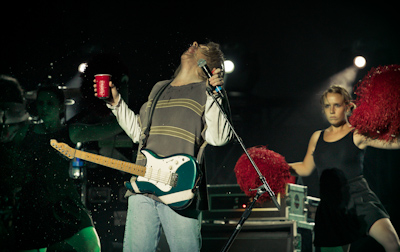 (Above) Yankovic portraying Kurt Cobain in “Smells like Nirvana.”

Encores are an extra concert

Yankovic and his band performed for two and a half hours, including two encores that were a concert in their own right. He requested everyone light up their cell phones for a full-stage production: Yoda. Several Star Wars Stormtroopers appeared on set, led by Darth Vader. Drummer “Bermuda” Schwartz had hair coifed as Princess Leia, and Yankovic portrayed Obi-Wan Kenobi.

I wondered where he got the energy and where he got all those Star Wars characters. Later, at a backstage meet-and-greet, I spotted Darth Vader and his minions. I asked them, “Where did Weird Al ever find you guys?”

Darth, who is Jim Maahs of Champlin, is a member of a garrison of Star Wars costumers. “The Weird Al promoters contacted us and requested a local garrison [to appear at his show].” There are 5,000 garrison members in the U.S. he said. As Yankovic’s concert tours, they request other garrisons in other cities.

Many attendees wore “Weird Al” t-shirts and sweatshirts. Steve Poreda, 40, of St. Paul said he found the concert very entertaining. “I thought he would be out of touch with people, but he had modern songs. He went across the board and he appeals to everybody. There’s a value in laughing at yourself,” he said.

“Weird Al” Yankovic is a class act. No wonder he has 1.8 million Twitter followers. 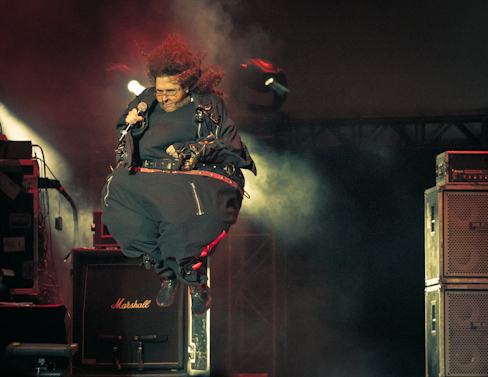 (Above) “Weird Al” in “Fat,” a parody of Michael Jackson’s “Bad,” which included a fat suit and face mask. 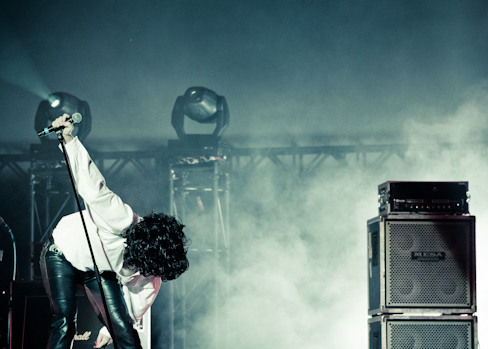 (Above) Yankovic’s imitation of Jim Morrison was a highlight of the evening. 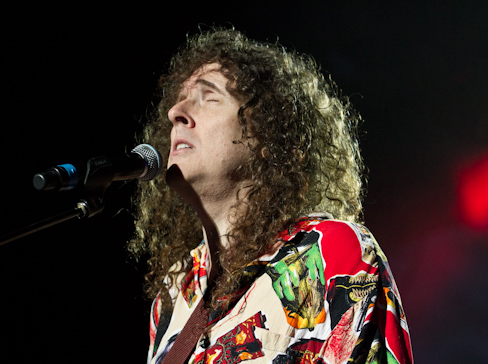 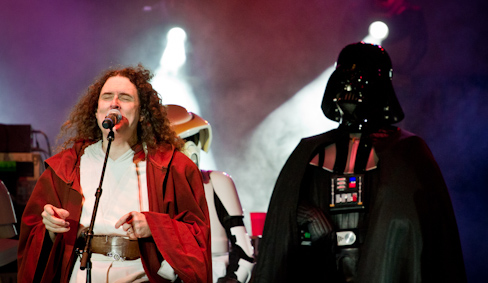 (Above) Yankovic’s encore Yoda included a local Darth Vader and local Stormtroopers performing on stage with him. 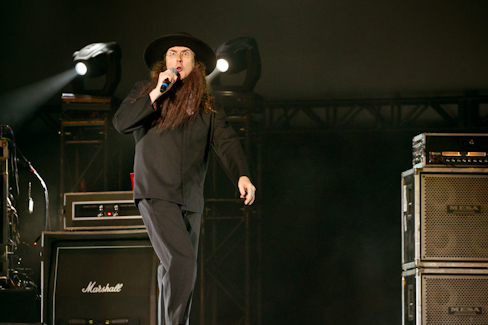 (Above) Yankovic played plenty of classics, like “Amish Paradise.” 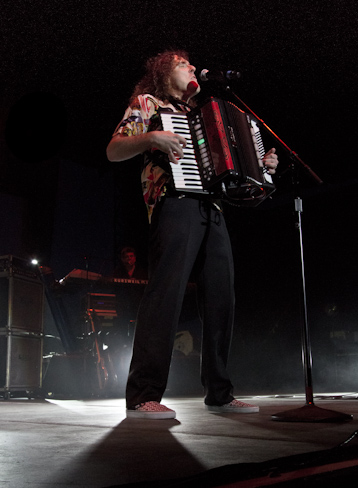 (Above) Yankovic made sure his accordian was put to good use. 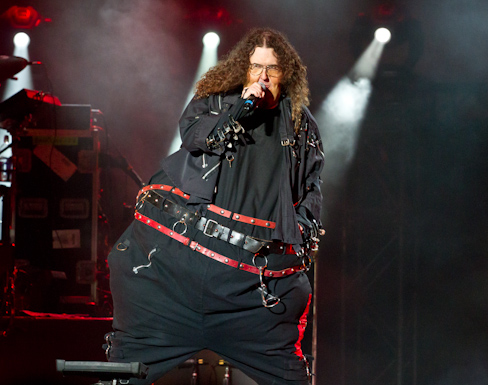 (Above) Yankovic’s “Fat” with his many-zippered jacket, a tribute to Michael Jackson’s “Bad.” 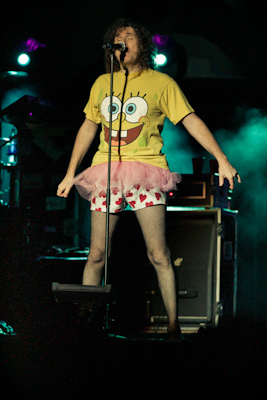 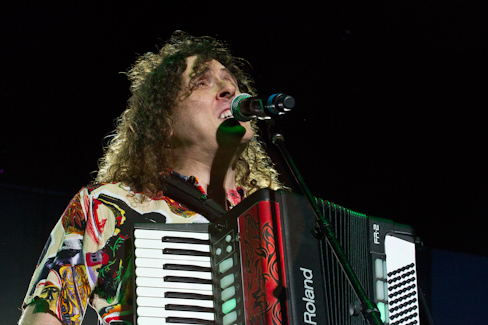 (Above) Yankovic gave a two-and-a-half-hour, nonstop show with a full band and two encores. 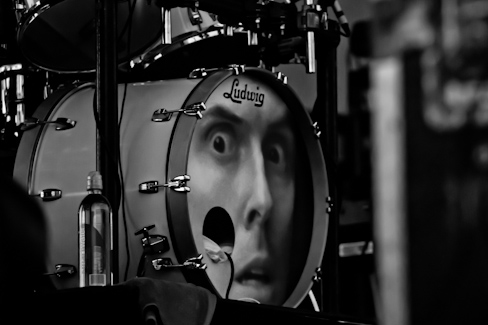 (Above) Detail of concert drum. 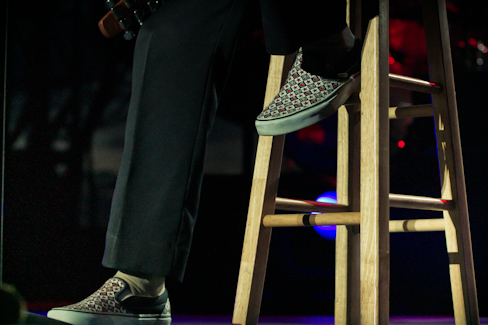 (Above) Yankovic’s shoes had many changes.

(Above) Promoters contacted a local Star Wars costume garrison to appear at the show. 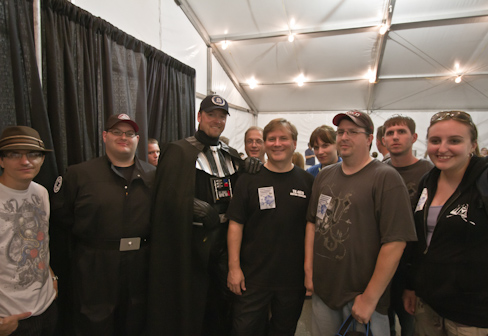 (Above) Darth Vader (Jim Maahs of Champlin) and a group of “Stormtroopers” belong to a local Star Wars costume garrison that was contacted by concert promoters to appear with “Weird Al” onstage. Shown is the garrison at Yankovic’s after-show meet and greet. Yankovic asks garrisons around the country to help him out.