If you had told any of our group of eight teachers a month ago that we would be spending a sunny afternoon in February picketing at the state capitol in Madison, we would have thought you had lost your mind. As elementary school veteran staff, we would be 100 times more likely to be correcting math papers or putting up a bulletin board. Yet that is exactly what happened on Saturday, as we joined tens of thousands of fellow public workers and their sympathizers on the Capitol Square to protest the bill that would unilaterally dump our collective bargaining agreements, sick leave, retirement language, preparation time, and general union rights under the guise of “a moderate proposal” to balance the state budget.

Most teachers I have heard from are willing to negotiate paying a greater portion of health care and retirement, but Governor Scott Walker has not offered to negotiate. Therefore, a trip to Madison was in order.

Everyone we saw was peaceful and orderly. Signs were even posted inside and people marched around with signs stating, “This is a PEACEFUL demonstration.” Many streets were blocked off by police for the demonstration, but when they weren’t, people waited for the walk light and allowed others to pass. Although there was abundant chanting and singing, we saw no altercations.

We were present during the planned Tea Party demonstration. There appeared to be at least several hundred people present. After the gathering, small groups of them spread out along the street and occasionally wove through the marchers. I did not hear any verbal interaction.

Some of the more memorable sights:

Terry Schoessow has 31 years of experience teaching in Wisconsin public schools and is a member of the Wisconsin Education Association Council, the union representing 98,000 public education employees. 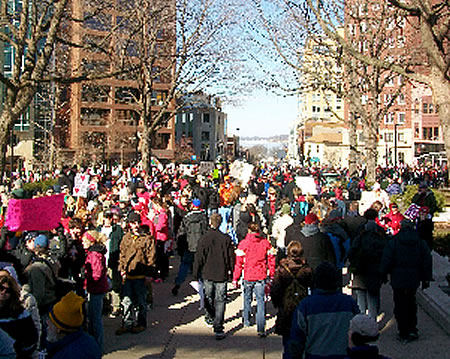 Marchers fill the streets surrounding the state Capitol. In the distance are the placid waters of one of the many Madison-area lakes.