While the job market remains weak throughout the state, central Minnesota appears to be in the weakest condition of all regions and may be facing the toughest task in turning its economy around.

Part of its problems comes from its dependence on commuters traveling to work in the northern metro or other distant counties. With jobs already scarce in the central part of the state, finding nearby work is tougher than in denser areas.

“There seems to be a serious problem in the land that is between the Twin Cities (metro area) and what most people would call rural,” said Kevin Ristau, an analyst with Jobs Now Coalition, a nonprofit group that monitors the labor market.

Concerned Minnesotans during past economic hardships often expressed sympathy for farmers, workers on the Iron Range, or those communities heavily tied to manufacturing. Both agriculture and mining are in robust conditions right now, but the slow recovery from the 2008-2009 Great Recession has dampened prospects for skilled and unskilled workers across industry sectors.

Central Minnesota had 27,000 unemployed people seeking 2,400 unfilled jobs, a ratio of 11 jobs seekers to each job, according to Jobs Now Coalition’s May report. For comparison, the ratio was two-to-one in 2005’s fourth quarter, meaning that the number of job seekers is up 83 percent while job opening are down 64 percent from that healthier time.

The news across central Minnesota isn’t all bad. St. Cloud has a relatively strong local economy. However, a state shutdown or mass layoffs in public education and public services could sap business strengths in retail, entertainment and various services. Also consider that while the City of St. Cloud is weathering the downturn, DEED notes that 20.9 percent of workers living in Stearns County commute to jobs in other counties.

That is indicative of commuting-dependent Central Minnesota counties. April unemployment data demonstrates the complexities of finding work in the region.

Elsewhere in the region, Kanabec County had the second highest unemployment rate among Minnesota counties at 12.5 percent, which was behind only Clearwater County in Northwest Minnesota (14.9 percent). 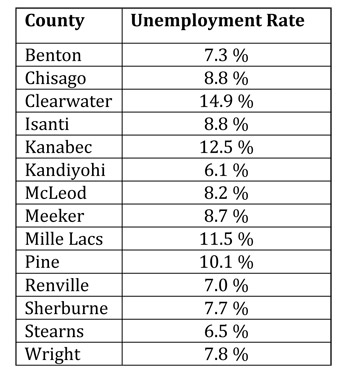 This means that only Stearns, which includes St. Cloud, and Kandiyohi, surrounding Willmar, have unemployment rates lower than Minnesota’s statewide rate.

But that’s only part of the problem. Jobs Now Coalition has noted that 51 percent of job openings in Greater Minnesota are lesser paying part-time jobs while about a third of metro area job openings are part-time.

We can’t just assume Central Minnesota’s economic problems will disappear when the economy rebounds. There’s no guarantee those good-paying metro jobs will return and at today’s, fuel costs, driving to a low-paying, part-time job is unsustainable. We must figure out how to provide economic stability for folks living in this region.

A lesson from our past should help guide public policy planning around this issue. The American History magazine now arriving in mailboxes notes the federal minimum wage had its greatest purchasing power in 1968, at $1.60 per hour. That’s $10.27 per hour in 2011 dollars.

The Family Wage & Budget Calculator at jobsnowcoalition.org that a metro area family of four with both parents working would need both workers earning $14.78 per hour to meet basic family needs. The current minimum wage is $7.25 per hour.

Little wonder, then, that housing markets in the exurban sprawl areas are seriously depressed. The state should be looking at ways to stabilize home values until foreclosed and underwater homes are absorbed by supply-demand functions of localized markets.

Financial institutions reflect statewide problems brought by unemployment and the housing market’s collapse. Commuting communities are well represented in Minnesota’s list of bank failures. Half of the 16 Minnesota banks that have failed since the recession started in 2008 were in communities surrounding the Twin Cities.

Overcoming all these problems will take one giant first step. Political leaders in Central Minnesota and areas surrounding the Twin Cities must come to grips with the fact it isn’t only small towns and big cities that have problems – some of the greatest problems are right at home.