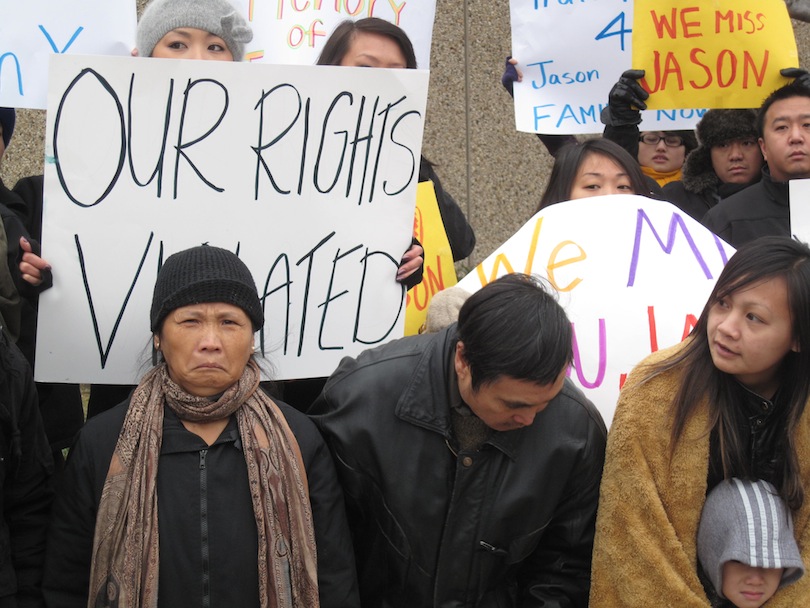 Late on Friday, November 19, Mee Yang finally saw the body of her husband, Jason Yang, who died on November 13 after a police chase from the Epic nightclub in downtown Minneapolis. Yang was allowed to view her husband’s body, accompanied by a registered nurse, after obtaining a court order. She was accompanied by Michelle Gross, from Communities United Against Police Brutality who is a registered nurse, but had to stand behind glass to see the body.  They were not allowed to bring a photographer.

The family of Jason Yang, along with more than a hundred supporters had rallied at the Hennepin County Medical Examiner’s Office earlier on November 19, asking to be let in to see his body.  Yang’s wife, along with his siblings and parents, with the support of Communities United Against Police Brutality, asked that they be allowed to take photographs and determine for themselves whether they believe he died from jumping off a parking ramp.

“I’m hoping to get some answers,” Mee Yang said after the rally.  “It makes me so angry.  That they don’t understand how hard this has been for me and my family—especially my little boys who were so close with their Dad.  I just seek answers, that’s all, and justice especially if there was any wrongdoing—but you know at this point I’m trying to do is seek answers for some closure.”

John Yang, Jason’s brother, said the HCME never asked the family to identify the body, that instead they had used his photo identification.  He said they tried before to go in and see the body, but HCME refused to let them.

He said the reason the family wants to see the body is to see if there is any evidence.  When asked what evidence they were looking for, he said “We’re looking for anything.  We don’t know—we just know there’s a lot of questions that need to be answered.”  Yang said the family didn’t want the body released to a funeral home because then any evidence they found would not be able to be used in court.

According to Wameng Moua  of Hmong Today, Yang had just started working at Bruce Vento Elementary School in Saint Paul.  He had a college degree from Northwestern Bible College and was on the Hmong Chamber of Commerce.

Yang was a much-loved member of the community.  He had had always gotten top grades, and had been a star athlete on Central High School’s soccer team.  “Everyone looked up to him,” said his brother John Yang.  He and Mee Yang had four young children.

William Palmer, Public Information Officer for the Minneapolis Police Department, said that Yang was one of the instigators of a fight at Epic on November 13.  According to the police report, officers pursued Yang on foot.  Palmer said Yang ran into a parking lot, then out of the parking lot onto a ramp into Highway 94, where he jumped off the fourth street exit from the barrier.  The police report states that Yang was pronounced dead upon arrival by the paramedics. According to Palmer, there are two ongoing investigations about the incident: an Internal investigation by the criminal affairs unit and a criminal investigation.

Not everyone believes the MPD’s version of events. Exactly what happened that night at Epic remains unclear.  The Minneapolis Police Department has no report for the incident, although they do have a very limited report of the police chase leading to Jason’s death, which says that he jumped from a 394 off ramp in downtown Minneapolis.

Some in the Hmong community say that the bouncers at Epic are notorious for beating up on Hmong people. A representative for Epic Nightclub could not be reached for comment.

Speaking on condition of anonymity, a witness present at the Epic on November 13 said:  “The police were running around, kicking young women, using racial slurs.” In a comment that speaks to the level of mistrust of Minneapolis police, the witness also said that, “Everyone was convinced that he [Yang] was killed by police and thrown over.”

Many from the Hmong community are still shaken and angry about the 2006 death of 19-year-old Fong Lee, who was shot by a Minneapolis police officer. Rulings in both the criminal and civil court cases surrounding the Fong Lee case have been in favor of the police.

The Hennepin County Medical Examiner’s Office initially did not allow the family access to the body. “This is not a funeral facility,” said Carolyn Marinan, Public Affairs Director for HCME.  She said the reason the body hadn’t been released to the family yet was because the family hadn’t told them to what funeral home to send it.  The Examiner’s report hadn’t been finalized, she said, so she could not say the cause of Yang’s death.  However, when told that the family wanted to see the body in order to see for themselves any evidence that he might have been killed in a way that was not accidental, Marinan said:  “This is a highly regarded institution.  They take what they do very seriously.”

Marinan said the body could be released to a different facility to do another autopsy, but this would mean the family would have to pay for it.

Outside the HCME’s office on Friday morning, John Yang thanked the community for their support.  “This means so much to the family.  There’s so much support,” he said.  “We’re in a tough time right now.  We miss Jason.  It hurts us.”  After speaking, John introduced his father, who addressed the crowd in Hmong.