It’s hard being a mass transit proponent in a medium-sized Midwestern city. It’s hard being an urbanist in state whose legislature is filled with mostly rural and suburban representatives. And it’s hard being a person who tries to grasp complex issues in 2013 in general. All these things (and more) make it rather hard to get good public works projects done. On occasion, when we’re thrown a bone, we take it, regardless of quality.

As a result, there are lots of half-measures and compromises in the Metropolitan Council’s 2030 Transit Plan. 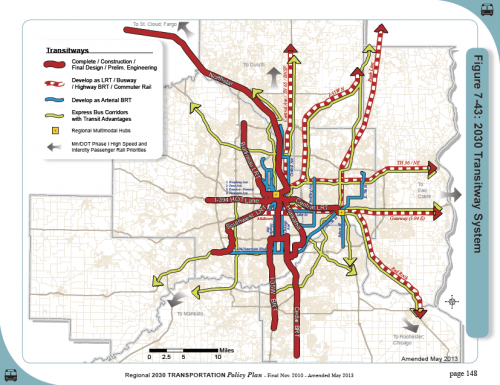 Almost none of this is optimal

I hate to be a drag. But it’s worth noting that our peer cities are lapping us in mass transit investments. Cities in Texas are lapping us in mass transit investments. But these are things that are already done. What about the future? We fought hard in 2008 to get a dedicated funding stream. Are we going to continue to spend billions of dollars this way?

So far it looks like, yes, we are. The Green Line extension planned for the Southwest Corridor is a mess. I want to use the word disaster, but I also want to avoid the hyperbole of the people yelling about freight trains crashing into the children. The situation has…deteriorated.

Without getting into a very technical, complicated explanation, here’s a summary: We’ve wanted to build a rail connection with the populous, wealthy southwestern suburbs for a while. Luckily, we already owned a lot of right of way in the middle of the route, by way of the popular bike trails that extend from Minneapolis out to Chanhassen. Back when the Alternatives Analysis was done, we had two choices to route the train out of Minneapolis. Option 1–let’s call it “3A”–would have left the city by heading straight west from Downtown Minneapolis, amongst the bike trails and train tracks in the Kenilworth Corridor. Option 2–let’s call it “3c”–would have traveled through the city, heading south from Downtown Minneapolis, probably in a tunnel under Nicollet Avenue, and swinging west at the Midtown Greenway to exit the city. 3A was projected to cost $1.25 billion, while 3C would have run us $1.5 billion.

We picked 3A as the locally preferred alternative in 2010 in a very…mysterious…decision that involved lots of…mysterious…math. Highlights include a $100 million dollar typo, a station with 1,000 projected daily boardings in Kenwood, and the Feds changing the funding formula after we chose our alignment. We’ve recently discovered that we won’t be able to accommodate a bike trail, freight trains, and the light rail in the same right of way, and so we’re considering options to build a tunnel in the Kenilworth Corridor–the cheapest of which would increase the project cost to at least $1.37 billion dollars and as much $1.7 billion dollars, depending on the option.

Let’s not muck this up too much–we were told that building a tunnel through the city was too expensive, so we decided to skip the city and build what amounts to a commuter rail line (in the vein of the Northstar Line) for suburbanites. Now, three years later, we have been told that we’re probably going to build a tunnel anyway. This is crazy. Again: This is crazy.

We need to start the process over. Arguments about us having to get in the back of the line for our federal match are unconvincing. The money isn’t really the important thing–this is a hundred year investment. Cost overruns aside, Uptown has been booming. The blocks along the Midtown Greenway have added thousands of new residents and from my south-facing window in Loring Park, I see cranes adding many more. Downtown Minneapolis is growing like crazy, too. There are real mobility problems in both places. Trend pieces about “the new urban lifestyle” are a dime a dozen, but gas prices aren’t going down anytime soon. The 30 minute rush hour travel time from Downtown to Uptown on the Route 6 bus is unacceptable. I’m not going to speculate about what the perfect route for Southwest would look like, but it doesn’t dodge tens of thousands of Minneapolitans and avoid Uptown.

Here is a district map for the Metropolitan Council. Here is a list of council members. You should contact your council member, and we should get this stopped. It has officially stopped making sense, even for the glorified commuter rail line it claims to be.

P.S. All of the above, with different proper nouns and dollar amounts, applies to Bottineau (Blue Line extension) as well.