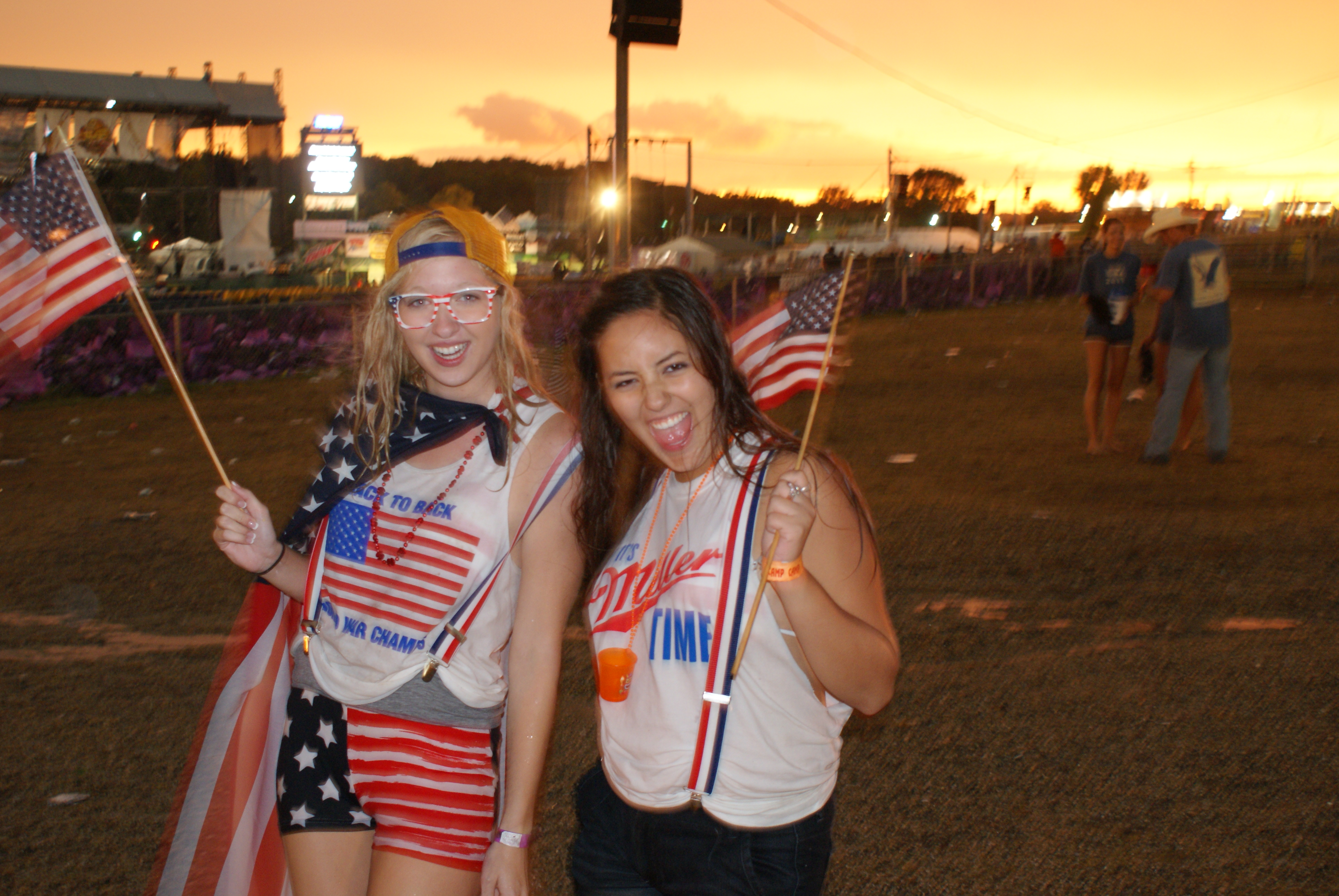 When you go to WE Fest during a thunderstorm watch, you will find yourself watching the looming clouds above the Soo Pass Ranch in Detroit Lakes, Minn., and wondering when they’re going to unleash a torrent of rain. You will watch a few minutes of a fledgling young buck country singer, Brantley Gilbert, as he wraps up his set. As you watch the hordes of people, young and old, and observe license plates from Montana and Iowa alike, you will agree with his song: Country must be country-wide. And everyone is gathered in the heart of lake country to celebrate.

When you go to WE Fest during a storm watch, you visit with staff in the VIP area who tell you that the show will go on if it rains, but not if there’s lightning. A young guy in a cowboy hat and a Sioux T-shirt will tell you about meeting Luke Bryan, country hottie and a Thursday performer. They will tell you that if it rains, you better come back to VIP and hide under the tents. Plus, there’s food provided and that $7 thermos gets filled with Miller Light for free, so you’ll be fine.

When you go to WE Fest during a storm watch, you will find yourself in the Saloon, a bar up the hill from the bowl area. You and your brother, both holding the aforementioned red Thermoses full of beer, will find your cousin there and the three of you will drink some syrupy cocktail. You will admire the pictures of country legends who’ve played the Fest in its 30 years: Randy Travis, George Strait, Alabama. The bar will start to fill up with people anticipating rain.

When you go to WE Fest during a storm watch, you will be stuck in the Saloon as the rain begins to pour. The winds pick up dramatically. Lightning strikes. Security guards shut the windows, but people continue to gather around them. You worry that the music will get canceled for the night; what about Steve Martin? What about Toby Keith? What happens at WE Fest when a storm strikes? People file in like obedient cattle. You’re all stuck, so you might as well have fun.

When you go to WE Fest during a storm watch, you meet a lot of folks from Minneapolis, mostly 30-year-old men. You envy the guys with better tans than yours, and yours is first-rate. You get a hug from a shirtless guy wearing a giant belt buckle and do a little twirl for a middle-aged guy who tells you you look pretty. You chat with some 40-something women in homemade WE Fest tees. In your head, you play a mean-spirited game called “Count the Sequin Tank Tops” and tally up to nine. You admire the girls in embellished, expensive cowboy boots (some sold at the Fest), but you don’t admire their denim minis and tied-up flannels. You watch frat boys chat up cougars and grizzled old cowboys hiding solitary against a wall. Even though you’re all crammed into this bar like so many cows, you’re all smiling. You and your brother try to start a singalong of Garth Brooks’ “Friends in Low Places” but it doesn’t catch on.

When you go to WE Fest during a storm watch, you drain your Thermos of beer and wait for the storm to end. The Saloon starts to get uncomfortably warm. The hordes demand a window or two be opened. Nobody’s allowed out. What are the people in the Bowl doing? What about the poor folks in tents? Well, this is a Minnesota festival and the weather in August can be as crazy as December.

When you are released from the Saloon, the sky is orange and the place is deserted. Slowly but surely, people begin to tramp through the mud and resume their fun. Food stands buzz again, beers are poured. The music is still delayed. You try to return to VIP to fill up your cup again, but no one is allowed in.

When you go to WE Fest during a storm watch, you accept that no music can happen while lightning is striking. It lights up the sky, which is slowly turning purple. People mill about in K102 plastic ponchos; a girl offers one to you and your brother. There are guys in trash bags sitting on the soggy grass and staring at the girls who pass by in skimpy costumes.

When you go to WE Fest during a storm watch, the show does go on. Steve Martin and his bluegrass band take the stage once the threat of lightning passes. Even though half the crowd probably doesn’t know him as a legendary comic/actor/author/banjo player quadruple-threat and didn’t grow up with their dad singing the “King Tut” song, they go crazy.

You will hear Toby Keith finishing his set as you leave the fest; you and your brother (still in his K102 poncho) walk the mile back to your uncle’s house, which is close enough that Keith’s velvety Texas drawl sings you to sleep. You will fall asleep dreaming about Toby taking you on tour and giving you your own restaurant franchise.