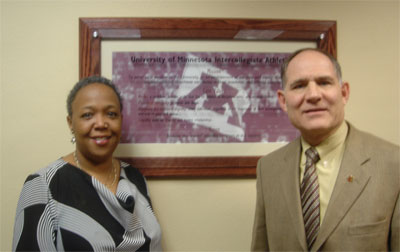 The Minnesota Spokesman-Recorder and University of Minnesota athletics have embarked on an unparalleled partnership that includes marketing and promotion as well as the use of several on-campus resources.

“It is a win-win relationship for both parties,” says MSR President Tracey Williams. It further solidifies Minnesota’s oldest Black newspaper, 71 years and growing, as a serious player in the local media, now prominently recognized by the state’s largest university.

The MSR-UM venture is part of Athletics Director Joel Maturi’s first phase of his diversity plans. After arriving at Minnesota in 2002 to head up the then-merged men’s and women’s athletics departments, he found himself heading a virtually all-White department. He saw not only a department, but also a university that had become an island unto itself — a vision many in the Black community share and had witnessed for years.

Almost immediately, Maturi took steps to build a new bridge between the community and the university. Most of us know, and grudgingly accepted, that such progress is often turtle-like, and change for some brings out the mule stubbornness in them. This became evident as Maturi got some heat internally and in the media when he hired former AD and Vice President McKinley Boston as a consultant on dealing with diversity issues within his department.

“I have received lots of criticism,” Maturi recalls, “and certainly some encouragement and advice on how we can better engage the African American community and the minority communities of the Twin Cities.”

Now the athletic director at New Mexico, Boston and his consulting firm conducted over 40 formal and informal interviews and gathered information on the Black community’s perceptions of the U of M athletic department from staff, coaches, student-athletes and community members. He submitted his final report to Maturi this fall, and the MSR obtained a copy of it. Following are some key (and not unexpected) findings:

• Employees feel that minorities are treated differently within the athletic department: “There is a difference between how people of color are treated here… Someone’s waiting for you to mess up.”

• There is a general lack of sensitivity and awareness regarding issues of concern to minorities among the administration: “It’s hard to share issues or concerns when you know it’s not necessarily a priority.”

• The lack of diversity is a barrier to engaging members of the Black community.

• Student athletes and others feel that there should be a greater commitment to support students after graduation.

• Student athletes, staff and coaches all said it is personally important to see diversity within the administration to show that it is open to them: “Students need to see African Americans in sports, but not just as players or coaches.”

Among Boston’s recommendations is strengthening a relationship between the Black community and the athletic department. Maturi initiated two actions as a result: First, he created a new associate AD position, which he expects to fill soon.

“That person will be fully in charge of engaging and making sure that we are doing the right thing the right way,” he says. “The hire is a great first step,” adding that the MSR-UM partnership “is another great step.”

Associate Athletics Director Gregg Shimanski adds that it is appropriate that athletics take the lead in creating diversity at the university. “We call ourselves the window to the university,” he points out. “If we are a member of the community, and we believe that we are, we can’t be selective.”

As historic as the MSR-UM venture is, it isn’t a panacea; the fact remains that the University of Minnesota hasn’t solved all of its diversity problems, which this column — and the rest of this newspaper — will continue to point out as necessary.

Its athletic communications staff remains White: In almost two decades of covering Gopher sports, there have been only two Blacks on staff.

Despite the number of Blacks studying journalism and mass communications, I haven’t seen too many of them covering sports for the Minnesota Daily, the student newspaper, where they can get hands-on experience, make mistakes, and learn from them as their White counterparts are able to do. Same for the campus radio station, Radio K. These are just a few items on our diversity to-do list.

For many years, our newspaper has been prominently listed in the U of M media guides, yet there are still some in Gopherland who haven’t accepted that the MSR is more than just a weekly afterthought. However, both Maturi and Shimanski have gone on record that when it comes to local newspapers, the MSR is a before- and during-thought.

“I want to read substantive stuff,” says Shimanski, “and I’m not going to get a lot of the insight in the Star Tribune. Having a media partner like the Spokesman-Recorder is valuable to us.”

“My challenge is to best position ourselves so that we can respond to what is perceived as many years of neglect of not connecting with the newspaper and the people who are involved with it, and the entire [Black] community,” adds Maturi.

In my dealings with him since he became AD, I have found Maturi genuine, sincere and forthright. Ditto for Tracey Williams, who says of the partnership, “I feel that there is a lot of sincerity as opposed to just doing the right thing.”

“We listened to each other about what’s important,” explains Shimanski, “and crafted a strategic partnership that is beneficial to both parties.”

“I feel badly it has taken this long,” concludes Maturi.

Just as we will continue to point out shortcomings, this column will note accomplishments as well when they occur. But even as we at the MSR celebrate this momentous occasion, let us be forever vigilant in our knowledge that, before full diversity is a reality at the University of Minnesota, we have miles to go before we sleep.