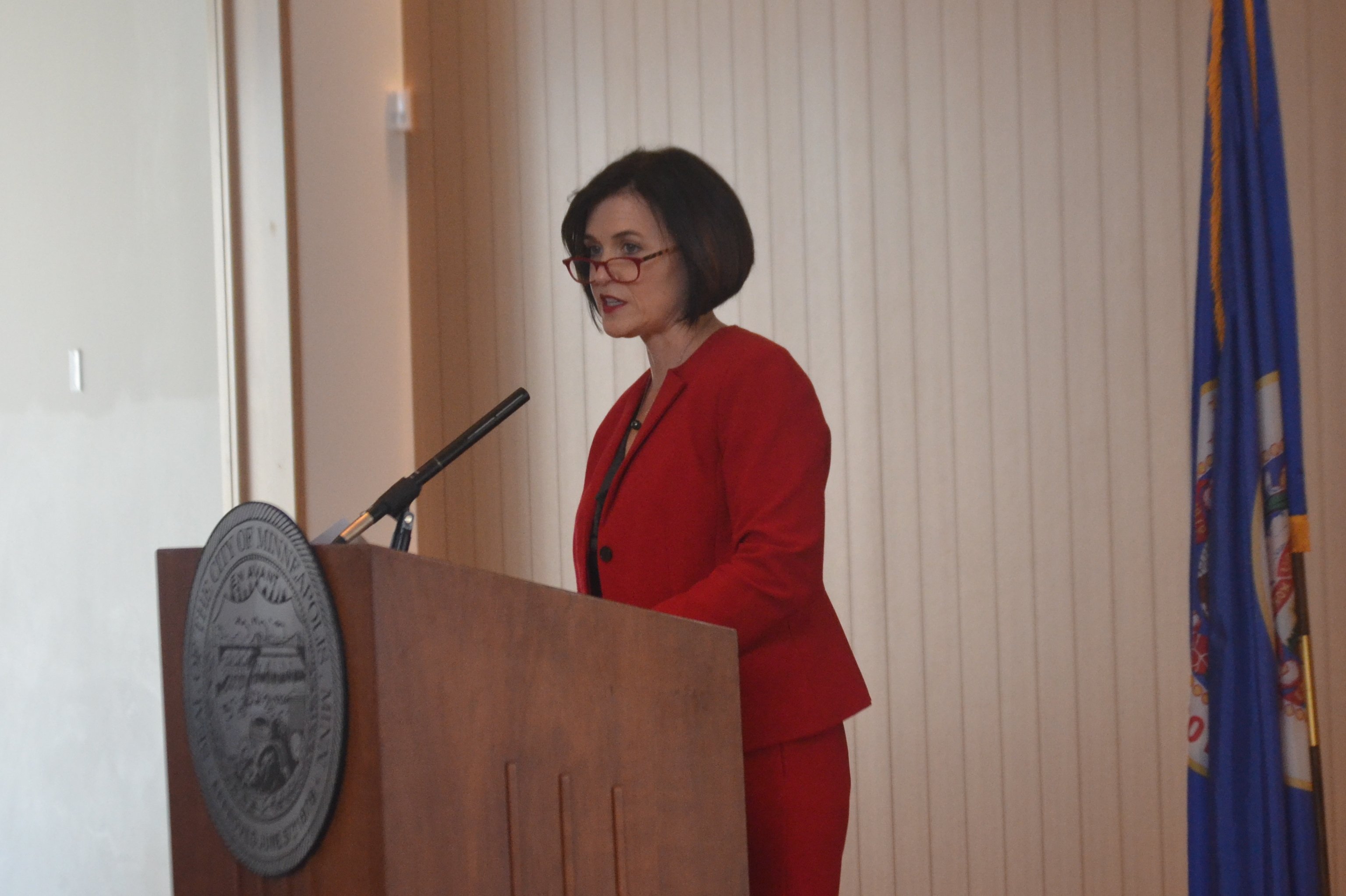 “One Minneapolis” was the central theme in Minneapolis Mayor Betsy Hodges’s State of the City Address on April 2, at the American Swedish Institute, where she discussed how the community working together can address challenges the city of Minneapolis is currently facing.

“The genius we have now, right here, will make us the great city of the 21st century if we are willing to do what it takes to make sure we leave none of that genius on the table,” Hodges said.

In her second State of the City Address, Hodges made a call-to-action to encourage community leaders to become graduation coaches for young men. She wants to narrow the gap between low-income and middle class families through collective bargaining in the private sector. She wants to raise the minimum wage and launch the Minneapolis Climate Champs Challenge, which will provide steps and tips as to how citizens in Minneapolis can help stop climate change.

“Minneapolis, the question before us now is how much genius are we going to leave on the table?” Hodges asked.

Hodges set her sights on early education, bridging the divide when it comes to income inequality and addresses climate change.

In order to efficiently use the genius of people in the community, Hodges said it starts when a child in the community is young. When it comes to youth development, Hodges cited the fact that 80% of a person’s brain is developed by the age of 3.

“What we do for our kids early on matters,” Hodges said.

The city will budget $1 million for housing so many children who are low-income, could have stable living conditions. She said the focus on child development is to make sure they are ready for the workforce; however, she also wants them to be engaged in their community.

“We need our kids to be more than workforce ready, we needs kids who are ready to build one Minneapolis. We need them ready and eager to take leadership in this community,” Hodges said.

She also wants them to be ready to vote.

“That simple act builds are community like none other,” Hodges said.

With the call-to-action on youth development, she doesn’t want to lose sight on the young men of color from ages 18-24 who are entering adulthood. She said that’s a vulnerable group and it’s important to get them on track. Through the AchieveMpls program, she encouraged all to become graduation coaches.

With the income disparity of low-income families to middle class families at its highest in nearly 40 years, Hodges wants to change that. She said the people of color and women disproportionally suffer the consequences from that disparity.

“This structural income inequality has devastating economic effects and devastating social and moral effects as well. It hurts all of us no matter our income, gender or race,” Hodges said.

She said there are two key things her office wants to provide. One is revival of collective bargaining in the private sector. The second is a minimum wage increase “that goes beyond setting the floor for poverty but to raising the ceiling on prosperity.”

Hodges said she has set a working families agenda as three things in particular will be evaluated: fair scheduling, wages being paid fairly and ensuring that all workers in Minneapolis receive earned sick and safe time.

Hodges announced the launch of the Minneapolis Climate Champs Challenge, a plan where she said everyone in the community is responsible. Each month, she will select a theme and set steps for how people can work toward that through daily life decisions. For the month of April, Hodges said the focus will be on recycling.

She announced the city’s plan to build 280 homes, increase locally produced food through urban farming and they are underway with processing the city’s Zero Waste plan.

A counter address, People’s State of the City is set for April 3rd at City Hall, organized by Neighborhood’s Organizing for Change.