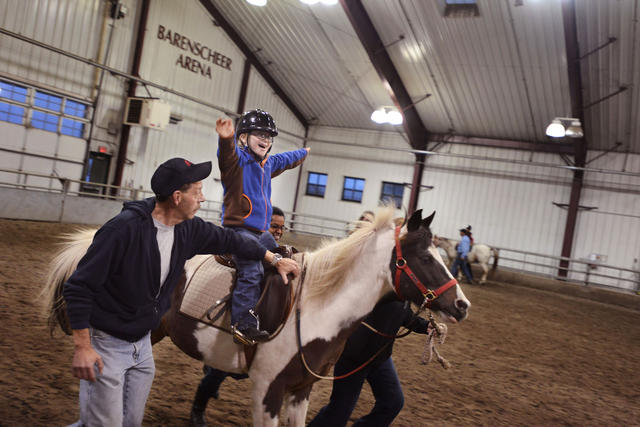 We Can Ride participant Sam Galles gets excited riding Mel, a therapy horse, with volunteers by his side at Barenscheer Arena in St. Paul. (Photos by Bridget Bennett)

The University of Minnesota has decided to not renew a lease with a service group that helps people with disabilities.

We Can Ride, a nonprofit organization that provides therapeutic horseback riding for disabled children and adults, has leased space at the University’s Leatherdale Equine Center since it opened in 2007.

The group’s contract with the University will expire Oct. 31 and will not be renewed because of space and accreditation concerns, according to a letter to those involved with the program from Trevor Ames, dean of the University’s College of Veterinary Medicine.

Volunteers and participants in the program said they were surprised and were concerned moving the program elsewhere would add difficulty for clients.

The demand for the space at the Equine Center is growing because of an increase in equine research and studies at the University, said Justin Paquette, a spokesperson from the University’s Academic Health Center.

In addition, the University was at risk to lose accreditation from the Association for Assessment and Accreditation of Laboratory Animal Care.

The AAALAC gave the University a citation because it was housing the program’s horses, which were being cared for by their volunteers. They were concerned about whether the volunteers were trained in animal safety because they weren’t associated with the University.

We Can Ride is looking for new locations to replace the current site at the University. The most likely location is in Hastings, Minn., said Brad Thorsen, the program’s executive director.

Hastings is about 30 miles from the University Equine Center.

Prudie Henriksen, a We Can Ride volunteer, said she was “devastated” about the lease expiring and said that Hastings would be too far for her to drive.

“You can’t get any better than this facility,” she said.

Eight-year-old Sam Galles has been coming to We Can Ride for therapy for two years. His mother, Amy Galles, said she has seen a “big difference” in Sam’s health since he started riding.

Because Sam has Down syndrome, he has loose joints. Since beginning therapy, he has built core strength and been able to walk longer distances, his mother said. In addition, she said, he has gotten better at learning and following directions.

Galles said that Sam may not be able to attend therapy as often when We Can Ride moves from the University location.

One volunteer for the nonprofit, Kay Jurkovich, said that transportation is an issue for many of the group’s clients and that the potential Hastings location may be too far for some of them to travel.

The Equine Center is the only viable option in the metro area for We Can Ride, she said.

“Many volunteers are upset with the situation,” Jurkovich said. 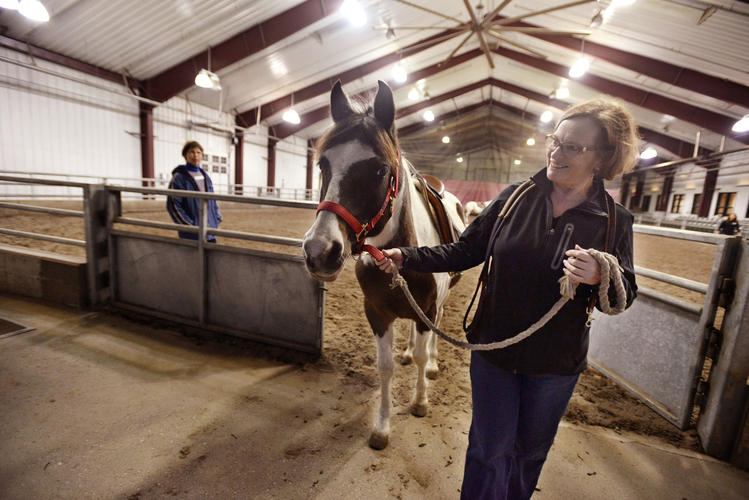 We Can Ride volunteer Cary Zahrbock walks Mel out of Barenscheer Arena in St. Paul.

The University’s decision to not renew the lease “didn’t come as a surprise,” Thorsen said. But volunteers in the program said they weren’t aware of the changes.

“I think [the lease not being renewed] was a surprise to everybody,” said Ronnie Hartmann, a volunteer and donor for the group.

In his letter, Ames said “It was a very difficult decision to not renew We Can Ride’s lease.”

Paquette said the University and the program came to an “amicable decision.”

Hartmann said the issue was a lag between when the group’s administration was told about the lease and when volunteers found out. She added that she wants a “better explanation” from the University.

Although Jurkovich said the volunteers were upset, her biggest concern was for the riders.