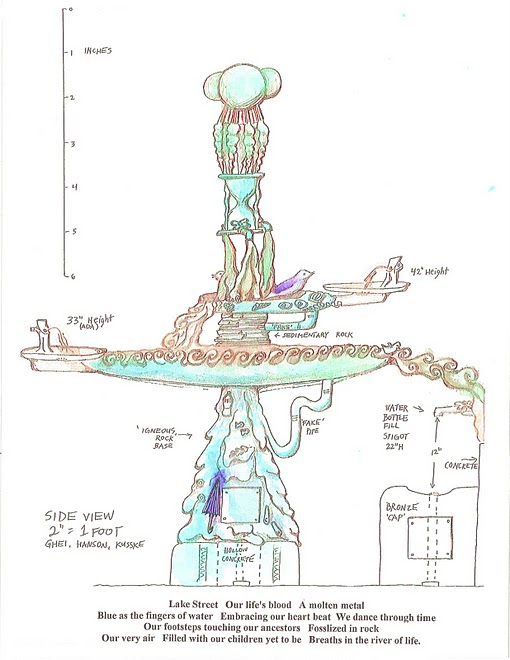 In 2008, coinciding with Minneapolis’s 150th anniversary, the city announced plans for a public art project featuring 10 drinking fountain sculptures that would celebrate, honor, and protect water as fundamental to all life. The budget for the project was $500,000, a fact that raised eyebrows among some local politicians, particularly Governor Pawlenty.

Mayor Rybak responded to criticisms by defending importance of funding public art, and pointing out the tiny percentage the city of Minneapolis spends on art in comparison to the state.

Now two years later, after all that hullabaloo, Minneapolis is having its first dedication ceremony for one of the completed fountains. A flier for the ceremony states that the sculpture, called 3 Forms, is one of four fountains being installed in the city. Mary Altman, public arts administrator for Minneapolis, explained that the City Council reduced the budget for the project. The plan now is to install only four sculptures instead of 10 at $40,000 per sculpture with an additional $10,000 reserved for costs associated with bringing water to the sculpture (plumbing, etc.).

3 Forms, created by artists Gita Ghei, Sara Hanson, and JanLouise Kusske, will have its dedication ceremony on Saturday at the Midtown YWCA at Lake Street and Hiawatha Avenue, in conjunction with the Y’s 10th Anniversary. The program goes from 11-2, with the dedication happening at noon followed by a performance by In the Heart of the Beast at 1:15.

On their blog, the artists write that they chose a classical fountain design because of its history as an inclusive gathering place. The artists write: “Using cast metal in the place of free-flowing water, we hope to highlight the fact that water is a limited resource to be conserved and shared as a privilege.” The sculpture includes three forms of water—in its gas, liquid, and solid forms—in order to indicate the passage of time, and the passage of water from spring to river to gulf. The fountain includes ornate decoration, rock formations and cast metal details which the artists say echo the Midwest grotto style.

Shown along with the sculpture will be artwork by South High School Students, who participated in a sculpture and writing residency with the artists. The students sculpted metal molecule relief sculptures based on their study of fossils of the pre-historic ocean and identifying the many languages of the neighborhood. Their work will be set in the concrete bench on the plaza around the fountain.

Although 3 Forms is the first Water Fountain Sculpture to be unveiled, it isn’t the first to be completed. Peter Morales finished his sculpture, Water of the Doodem Spirits, last year in front of Ancient Traders Gallery. However, a dedication ceremony never happened and last winter Ancient Traders Gallery closed while All My Relations Arts, previously housed in the gallery, moved and are now preparing to open their new space at the Native American Community Development Institute (NACDI). Altman said that Great Neighborhoods, which used to own Ancient Traders Gallery, is still the partner in charge of maintaining Morales’s sculpture.

Meanwhile two other sculptures are still under construction. Seitu Jones is working on a fountain that will be located on Main Street and 3rd Avenue S.E., and Lisa Elias’s sculpture will be located on 2nd and Marquette Avenues in downtown Minneapolis.