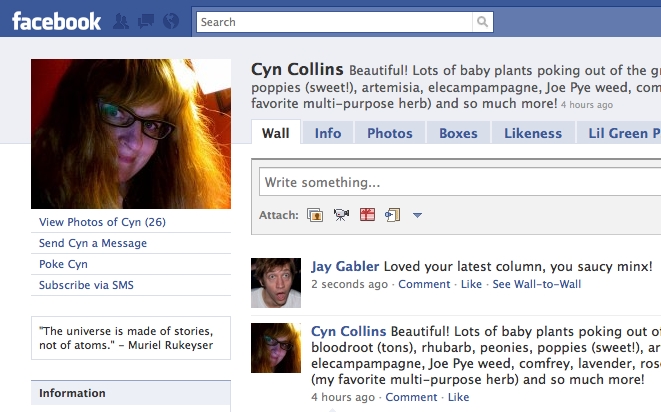 So I’ve been seeing someone for about a month and we’re super comfortable around each other and have an awesome time together. I really like him, but I’m not quite sure where our relationship stands. We’ve never had the “Let’s be exclusive” talk, and we don’t really refer to each other as boyfriend/girlfriend. I have no idea if I’m the only girl in his life, but I’m scared to ask because I don’t want to seem clingy or overly attached. There were some flirtatious messages on his Facebook from other women, but I’m not sure if that’s grounds for me to be jealous (which I am), and I definitely can’t tell him I looked at them without him thinking I’m weird and obsessive. How can I get some clarification here without seeming too attached?

Sounds great, so far! “If it ain’t broke, why fix it?” However, I do understand where you’re coming from. At the very least curious, and desiring clarity. I wonder myself, why isn’t he calling you his girlfriend yet? To me it’s all about clarity about the current situation, no matter what the answer is or how hard to take. Since you’re so comfortable together, you could ask a couple straightforward questions, or tease about him being your man, babe, sweetie…whatever affectionate term you’re comfortable with. I think sometimes people like hearing the possessive when they’re into someone. I don’t think if you tease him about being yours lightly, very occasionally, he’s going to run screaming for the door. You can gauge his reaction this way, too.

One month is not very long to know where the relationship stands. It’s quite early really, and perhaps the best advice I can give you is: don’t push the river. (If you don’t know this expression, it simply means let things flow of their own volition and timing, don’t force the issue.) This requires patience on your part. It is too young to begin to try to rein it in, understand all about it, and to control it (or him). Don’t choke the life out of this fun thing.

He might have the same questions as you. I feel one month may be a little early for the “let’s be exclusive” talk, but not too early to hear how he thinks the relationship’s going so far. I understand your fear of seeming clingy or overly attached—frankly, when you’re not yet calling each other girlfriend/boyfriend it may be a bit much to expect exclusivity and it may seem, as you say, perhaps a bit over-attached, yeah. I think at least two or maybe three months is a better timeframe to expect a consideration of being exclusive—though it’s still early enough to not be too dismayed if he’s not ready for that yet.

Regarding the flirtatious messages on Facebook—I note you mention he gets them from women, but not that you’ve seen flirtatious ones from him to others. Lots of people send flirtatious messages on Facebook because it’s fun and playful; that doesn’t necessarily mean they’re having relationships or anything. People flirt with me on Facebook or I with them, and it doesn’t mean we’ve done a thing in the real world—it’s just playful fun. It can be the equivalent of someone smiling at you in a way that notes you’re attractive, and that’s about it. So unless those messages are bordering on pornographic with details you recognize, I’d curb the jealousy. Yet, even then, it’s only been one month.

When you feel jealous, just get busy with something to distract you—yardwork, house cleaning, loud music, whatever, but do not ask him about them. Doesn’t mean some of us don’t do that at various points—hell, I’m a Scorpio, I’ll admit I did that on rare occasion, but only after we’d been committed for over a year. We women are nothing if not curious and investigative to the point of occasionally snooping through our guys’ stuff, but that does not make it right. (How would you like it if he did that with your stuff?) And honestly, it just makes you feel creepy. Yuck. If you can’t resist that urge—and really, try—just repeat the mantra, “I’d hate for him to snoop through my s*#$.” And if that doesn’t work, think, “Do I really want to know?” Because that could just bring unnecessary pain. Don’t ask, don’t tell! Above all else, we all like to feel trusted. If we aren’t, to the point of invasion of privacy, that can erode the relationship. So stop digging in his stuff! Just ask him for a bit of clarity! Take him out, get him drunk, he’ll spill. If he doesn’t drink, try asking after sex. Never before. Unless you’re not having sex. Then I don’t know what to tell ya. I’ve gotten answers I perhaps didn’t want to hear. It didn’t really suck! It was good to have clarity! A key in all this is to try not to get emotionally vested too much in one person until you know their heart is in it 100% as well. Easier said than done. But that’s one thing meditation and yoga are helpful with.

I suggest you ask if he is currently, or is interested in, seeing other people—”just out of curiosity.” You can let him know that you personally aren’t interested in seeing others at the moment because he’s so fun to be with…”how ‘bout you?” Keep it very casual and light, and accept the answer, even if you don’t like it—keeping at the forefront of your mind, it’s only been a month!