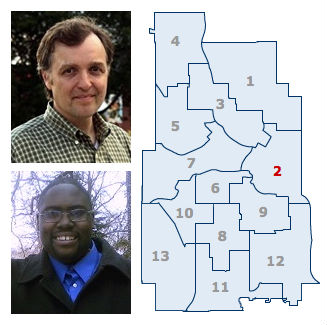 The Green Party's Cam Gordon and Allen Aigbogun, who's endorsed by the GOP and Independence Party, are vying for the Ward Two seat.

But in this year’s race, Gordon knows one thing for sure: He isn’t going to finish within 150 votes of a DFL Party candidate, as he has twice before. That’s because the only barrier to his re-election is Republican- and Independence Party-endorsed Allen Aigbogun.

For the first time in memory – and probably in DFL Party history – no Democrat is on the ballot for city council in Ward Two.

That makes this election a watershed for a ward that launched the political careers of such DFL Party titans as Hubert Humphrey and Don Fraser (Minneapolis mayors who served in City Hall, the halls of Congress, and – in Humphrey’s case – beyond).

Gordon, the only non-DFLer on the council, would seem a ripe target for the party that dominates politics in both Minneapolis and St. Paul. When Gordon was elected in 2005, his two Green Party predecessors on the council, first-termers Natalie Johnson Lee and Dean Zimmerman, lost their seats to DFLers by narrow margins after unfavorable redistricting.

The same fate might have been expected to befall Gordon. After all, he’d lost his first council race to DFL maverick Paul Zerby, in 2001, by only 106 votes. When Zerby declined to run again in 2005, five DFLers sought to succeed him, a fight that carried through three ballots at the DFL ward convention that year, from which Cara Letofsky emerged with the endorsement. Gordon then triumphed over Letofsky in the 2005 general election by a mere 141 votes.

Yet this year the DFL was loath to oppose Gordon. Rather, at their convention last spring, Ward Two DFLers resolved to support Gordon, in language just short of endorsement:

WHEREAS, Council Member Cam Gordon has done an excellent job serving Minneapolis’ Second Ward, and
WHEREAS, Cam Gordon has represented us in a manner consistent with the progressive values of the Democrats of the Second Ward, and
WHEREAS, the rules of the party do not allow for an endorsement of anyone who is a member of another political party, therefore
BE IT RESOLVED that the Democrats of the Second Ward do not endorse anyone for 2nd Ward Council Member, but do support the re-election of Cam Gordon to the Minneapolis City Council in 2009.

That action came in the wake of the strange unraveling of the candidacy of Charles Colson, the only DFLer to announce for the Ward Two seat this year. He dropped out March 1 after the Minnesota Daily revealed that much of his biography – education in England and at Princeton University, a childhood Hillary Clinton connection, experience officiating at the 2008 Beijing Olympics – was false.

On top of all that, Minneapolis is holding its first instant-runoff elections this year, a process that lets voters rank their preferences among a field of candidates. It’s a kind of electoral reform that Gordon has been a leader in pushing for more than a decade, and it’s supposed to help produce majority winners in political districts like Ward Two that have closely divided elections.

Yet Ward Two is the only council race in the city in which only two candidates are on the ballot – meaning it’s the only ward in which instant-runoff voting (IRV) cannot come into play.

“There’s a different feel to the race,” observes Gordon. “A different rhythm, with no primary.” By this point in past election cycles, he recalls, “we would have put more pressure on the campaign.” Still, door-knocking is underway, lawn signs are going up, and he’s making the rounds at neighborhood meet-and-greets.

“It’s going to come down to voter contact,” says Aigbogun, Gordon’s rival. The first-time candidate announced he was running early in the year but sees the campaign just now getting into gear, as voters he talks to say they’re beginning to pay attention.

Aigbogun has lived in the ward for seven years, through student years at the U of M and at William Mitchell School of Law in St. Paul, where he earned a law degree last spring. He is awaiting results of his bar exam, with hopes of working as a public defender (but as that profession is in decline in Minnesota, he’ll look for work as criminal attorney.)

Meanwhile he has kept the customer-service job he held as a law student, but has found that not returning to school for the first fall season in more than years leaves him time for campaigning.

Aigbogun is a former Democrat who finds things to like in many political parties, including the Green Party, and he says his core philosophy – “grassroots democracy” – knows no party. Still, his commitment to free market economics and limited government were attractive enough to garner endorsements from first the Republicans and then the Independence Party.

“The city needs a lot of reform,” Aigbogun says, citing fiscal mismanagement. He lays the responsibility for that at the door of the city council, which he says is supposed to “set policy and set the vision.” But in Minneapolis, he says, the council has set a “terrible vision that’s not working.”

Increasing taxes year after year is not a long-term solution to the city’s perennial problems with its budget, Aigbogun says: “Let’s fix it.” He favors a thorough audit leading to a restructuring of expenditures, likely sacrificing some “services people like for things it’s government’s job to guarantee.”

Is he out of step with a ward that has a reputation as among the city’s most liberal? Aigbogun looks at Gordon’s victory and sees “voters who are independent, who vote for the person” rather than the party.

Gordon sees some of the same financial problems in the city but broaches a solution that’s diametrically different from Aigbogun’s. “If the Minnesota Miracle isn’t working, and we can’t rely on local government aid,” Gordon says, “maybe we need to be able to raise a local income tax.”

But he’s quick to add that such a tax would have to have state approval and be part of region-wide reform so as not to make Minneapolis uniquely tax-heavy.

Both men support maintaining the city’s Board of Estimate and Taxation. A ballot referendum asks voters whether the city should dissolve the board, which sets tax levy limits for Minneapolis. Gordon said he would be meeting with a group that plans to campaign to keep the board, and Aigbogun said the board “provides a function and doesn’t cost us a lot of money – $70 [per month per member] plus parking.”

And while municipal financial woes can seem intractable, other issues that once were peripheral have found traction. Gordon marveled at how parts of the Green Party platform have come into vogue, citing his Homegrown Minneapolis effort to promote the local food economy (pdf) – an idea, he says, that “10 or 15 years ago seemed so far out.”

This is the fifth in a 13-part series on Minneapolis City Council races to run every Monday and Friday, now through Oct. 16. On Monday, Ward 7.