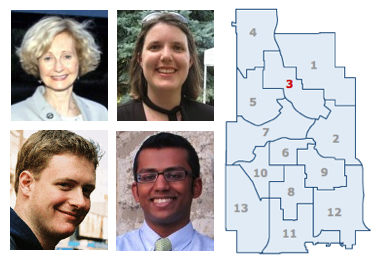 Suddenly, the city council race in Minneapolis’s Ward Three looks a lot like Ward Seven’s, where another DFL incumbent faces a lawsuit from a disgruntled developer. A difference: The suit involving Ward Three’s Diane Hofstede was just being drafted when the other, against Ward Seven’s Lisa Goodman, was being decided. But even before the news broke last Friday, Hofstede’s handful of challengers were beginning to grumble.

Hofstede, a first-term council member, is targeted in a lawsuit that began circulating in draft form after the city council turned down a developer’s appeal. Former Council Member Steve Minn and his partners allege that Hofstede’s communications with her colleagues about their proposed apartments by the Stone Arch Bridge violated rules requiring council members to take a quasi-judicial approach in deciding appeals. (She won’t comment.)

It’s a similar charge to the one upheld last month against Goodman, after another developer used Goodman’s emails as evidence that she had crossed the quasi-judicial line in opposing proposed new housing in her ward.

Even before the council voted 8-4 to deny Minn’s appeal, one of the four candidates seeking to unseat Hofstede in the Nov. 3 general election was citing city roadblocks to the Stone Arch project as one of his reasons for running. Republican Jeffrey Cobia lives across the street from the proposed development site in another building Minn and his partners helped develop. He mentioned Minn’s difficulties with the city in the context of zoning changes that would alter the number of spaces multi-unit property owners must provide in neighborhoods around the University of Minnesota. “A lot of the landlords felt they were being left out of the loop,” he said.

Cobia is quick to add he’s not carrying water for landlords but for renters in tenant-heavy precincts where extra costs for building owners translate to higher rents. And he sees the judgment against the city in Goodman’s case, as well as another $200,000 judgement in favor of a Ward Three bar owner, as signs that the current council is off the rails.

Another challenger, Melissa Hill, casts a critical eye at a different area where the city has been paying out: costly settlements for police misconduct, a particular problem for the ward’s two North Minneapolis neighborhoods, she said. (Hill, who said she was courted to run by several political parties but will appear on the ballot as a “Civil Disobedience” candidate, was arrested by Minneapolis police during the 2008 Republican National Convention.) If elected she would give the city’s Civilian Police Review Authority more power and would “kick out this police chief,” she said, because he “rarely disciplines officers who engage in misconduct.”

Hofstede counters that though police “will make mistakes in a high pressure job,” the city is making changes as a result of such settlements. “We’ve not been afraid to say, ‘This hasn’t worked,'” Hofstede said. “The police, mayor and council are on the same page.”

The incumbent (who shares a surname with former Minneapolis Mayor Al Hofstede by virtue of her marriage to his brother, Tony) names public safety and livability at the top of the ward’s issues, and her challengers chime in on that to greater or lesser degrees, and from varying angles.

It’s no surprise that policing should be a central issue for Ward Three, which runs from the North Minneapolis neighborhood where Fong Lee died at police hands to the Dinkytown blocks near the University of Minnesota where students and others semi-regularly run riot. Take the last weekend in September: A teen shot outside a Burger King in North Minneapolis, another melee in Dinkytown, and another arrest for Hill herself, this time in the midst of protests at the G-20 summit in Pittsburgh.

Not far from the home of ward resident U.S. Sen. Amy Klobuchar is the site where the first Minnesotan died in 2005 at the hands of a pistol-packing permit carrier under the state’s new conceal-carry legislation: Nye’s Bar, which Esquire has anointed as America’s best. It’s in the part of Northeast that has seen the highest-buck housing built, while just across the river, the ward’s two North Minneapolis precincts are among the areas of Minnesota hardest-hit by the foreclosure crisis.

Hill said she sees a “huge difference” in that part of the ward, where she lived five years ago.

A DFL challenger, Allen Kathir, told MnIndy that as he knocks on doors of people registered to vote last November, he is finding about 20 percent of their homes foreclosed.

Where doors in the ward are opened, Kathir says his intraparty challenge to the DFL-endorsed Hofstede isn’t presenting an obstacle. “No one has asked me, ‘Who is the endorsed candidate?'” Kathir said. “People have been asking about the governor’s election [in 2010]. That’s come up more than the mayor [and other city races].”

The ward’s ups and downs are sometimes seen as symbolic for the city as a whole. The Grain Belt brewery, a city-owned white elephant that was prematurely featured in Mayor Sharon Sayles Belton’s State of the City speech (it remained vacant after she touted a redevelopment plan that died), has since been revived as offices.

But the neon Grain Belt Beer sign, a landmark that was thought to have been restored two decades ago, appears unlit in a Hofstede campaign photo on her website. The sign property is now for sale by the family of city pioneer William Eastman, which has held the land it stands on since 1862.

Two weeks ago and block away from the Grain Belt Beer sign, at the Nicollet Island Park Pavilion, Hofstede hosted her seventh Third Ward summit, a celebration of a ward that Hofstede calls the city’s most diverse.

Kathir also hails the ward’s diversity but says he stopped by the summit and didn’t see it there: no student-age attendees and few from North Minneapolis. Many of those voters, Kathir said, registered to vote last year to help elect President Obama, who enjoyed heavy support in Ward Three.

Instant runoff voting (IRV) will provide a new twist in a ward that includes at least one precinct where running standard elections right has proved a challenge. Precinct one is a student-dominated Dinkytown area where student voters were wrongly turned away in droves on Election Day – and where one envelope with 100 ballots went missing afterwards, a point of contention in the Al Franken-Norm Coleman recount.

Kathir, a University of Minnesota grad who is trying to turn out student voters to back his candidacy, said he plans to have poll watchers at the troubled precinct’s polling place.

Said Hofstede of IRV: “People are still very confused by this.”

Voters will have a chance to allay any confusion about the candidates themselves at an Oct. 22 debate at the University of Minnesota’s Murphy Hall.

It’s an expensive proposition for Hill, who has a court date in Pittsburgh the day before. She is flying out and back the same day to make the debate rather than taking the bus.

(A fifth candidate for the Ward Three council seat, Raymond Wilson Rolfe, has not returned calls from the Minnesota Independent.)

This is the tenth in a 13-part series on Minneapolis City Council races to run every Monday and Friday, now through Oct. 16. On Friday, Ward 4.