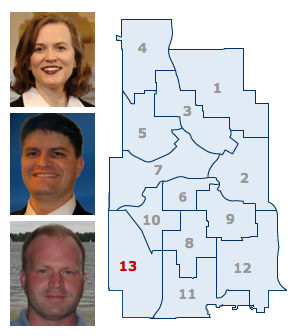 Minneapolis’ Ward 13 has an independent streak: In a DFL-dominated town, it hadn’t elected a Democrat to the city council in a dozen years. Then, in 2005, DFLer Betsy Hodges won the seat. Now candidates Kris Broberg, who is endorsed by two parties and supported by a third, and unendorsed DFLer Joseph Henry are hoping to capitalize on that independent spirit to unseat Hodges.

Ward 13 encompasses the southwest corner of Minneapolis, from the west edge of Lake Calhoun south to Lake Harriet to the Minneapolis-Edina border. With low poverty rates, it’s comprised largely of single-family homes and residents with above-average incomes.

Reform Party candidate Steve Minn, who won the seat in 1993 and 1997, is lauded by the Independence Party (formerly the Reform Party) as its first victorious candidate – well before former Gov. Jesse Ventura. Minn left the seat early in 1999, forcing a special election where independent “DFL expatriate” Barret Lane took office in an upset against DFL-endorsed candidate Karen Wilson.

Lane retired in 2005, opening up an opportunity for Hodges to take the seat for the DFL after being the only non-DFL spot on the council for more than ten years.

Candidate Broberg hopes this history of independent voting will make the district competitive during this fall’s election. Broberg has the backing of the Independence Party and the Republican Party. He’ll be listed as an Independent on the ballot in November, and this is not his first foray into politics.

Broberg was a delegate to the Republican National Convention in St. Paul as a member of the Ron Paul coalition. Despite that, members of the Ward 13 Green Party overwhelmingly backed him in a straw poll last week, Broberg says.

“I won the straw poll because I have made the effort to reach out to people of all parties, including Greens, and find common ground, we agree on many issues especially those surrounding local politics,” he said. “I like the ten values of the Green Party. Obviously I don’t agree on everything, and they don’t agree with me on everything, but this year people are fed up with the status quo in the city of Minneapolis and are looking for alternatives.”

He continued, “I am skeptical of both major parties when it comes to issues of war and peace. They both like to use the military to fight their own wars and they both like to spend a great deal of money.”

And finances are a big part of his campaign. Quoting a section of Hodges website, he said, “‘Minneapolis has its fiscal house in order.’ I couldn’t disagree more. According to the city’s own budget, they will at a minimum double our property taxes by 2018. According to my opponent, it could double that rate of increase if you factor in the city’s pension liabilities.”

Broberg is a smaller-government candidate. “Government at all levels is out of control and becoming an adversary to the people rather then a tool of the people to organize society. I want to represent the people and devolve the power from government back to the individual.”

DFLer Henry, an Iraq War veteran, is running to bring a veteran’s voice to the city council.

“We have a large veterans community in Minneapolis, and we have our own issues,” he said. “You have to have been through what veterans go through to truly understands those needs.”

He says military experience will be an asset to the council. “[In Iraq], we really had to learn to complete a mission even if we didn’t have all the tools we needed.” He says that lesson is important when dealing with a strained city budget.

Other issues that Henry promises to work on if elected include traffic, crime and preserving the culture of the city by making it easier for mom-and-pop businesses and harder for big chains.

He says he is concerned about traffic in the ward, and expressed concern over snarls caused by construction on Lyndale Avenue and the Crosstown Commons. “We need to make sure these projects get done safely and as quickly as possible,” he said. “I know it’s a state issue, but we can use the city to put pressure on the state.”

On crime he said, “We need more community policing as it builds those relationships with the neighborhood, and we need to get police out of their cars and onto the street corners.

If he’s elected, he’d like to see a pay cut for all council members. “City council members make $74,000, which I think is a little excessive, as is the $400 a week car allowance. I think we should put compensation more in line with the median income of the city,” he said.

He added, “I’m not a career politician. For me it’s a one-time thing.”

Hodges says that pressure on the city’s finances is an issue she has been focused on. “The two biggest drivers of that pressure are cuts to Local Government Aid and the city’s obligations to our closed pension funds,” she said. “Those two issues have been top priorities in my first term, and will continue to be priorities if I am re-elected.”

She says that the city and the state have to rethink Local Government Aid. “[LGA] is actually a revenue sharing program, and the City continues to send our sales tax, income tax, and some of our property taxes to the state and has gotten diminishing returns over time as the State has done their share less and less by cutting funding,” she said. “I am proud to have been appointed to the State commission on LGA, and through that process, starting this month, hope to generate a new vision of municipal funding in Minnesota and build the alliances and relationships necessary to make it happen. “

Hodges also acknowledges that the city’s pension obligations are a big part of the increase in property taxes. She says that the city must honor it’s obligations but also find a way to reduce the pressure that pensions have on the city budget. “The conditions under which we make those payments are extraordinarily onerous to the Minneapolis taxpayer,” she said.

This is the seventh in a 13-part series on Minneapolis City Council races to run every Monday and Friday, now through Oct. 16. On Monday, Ward 5.