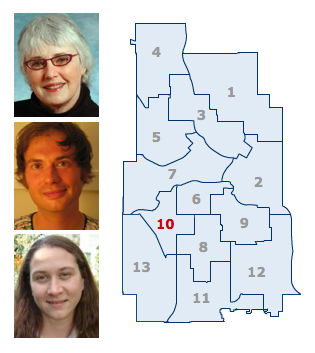 Ralph Remington, who represents Minneapolis’ Ward 10, announced his retirement in January, leaving an open seat that four candidates are attempting to fill. The ward encompasses much of densely populated Uptown including the East Isles, East Harriet, Lowry Hill East, ECCO and CARAG neighborhoods.

“I just feel like these jobs should have a shelf life,” Remington told the Southwest Journal at the time. “And I didn’t come into the City Council to stay for 12 or 15 years. That’s just not me.”

He did explore a run for mayor, but when current mayor R.T. Rybak announced he would seek another term, Remington bowed out.

Four candidates are currently vying for the seat he’ll be vacating.

Tuthill, who’s lived in the ward for 30 years and runs Tuthill’s Balloon Emporium at 25th & Hennepin, is a longtime neighborhood activist. “I am a founding member of not only a neighborhood association, but a business association as well,” she said. “The first recycling program in Minneapolis was started in the back of our business at 24th and Dupont in 1970.”

Asked if she feels the DFL endorsement is enough to win in a DFL-dominated city, Tuthill said, “I have to earn their trust and confidence like anyone else. That’s why I am out door knocking every night after I close Tuthill’s Balloon Emporium. I am getting a great reception at the door from voters. This energizes me to work even harder.”

Also running for the open seat is Kim Vlaisavljevich, an independent with no party affiliation. An accountant by trade, Vlaisavljevich’s platform focuses a lot of attention on property taxes and city finances.

“A big piece of why I’m wanting to run is that I feel real passionately about prudent fiscal management,” Vlaisavljevich said in a YouTube interview. “It’s something I feel I have as a skill set and I would be happy to bring that skill set to the table.”

“I think some financial expertise on the city council would be of huge value,” she said.

She disagrees with tax increment financing, saying that it leaves small businesses “not on even ground” with larger ones.

Alvin said one issue he would follow as city council member is development in the ward – and specifically the talk of allowing a Trader Joe’s being considered in Uptown to get a liquor exemption. Alvin says OKing an exemption for a chain store is unreasonable and harms small businesses in the area.

“It’s not fair,”he said, to provide incentives to one business and not others. Alvin also said that property taxes are out of control and that the city needs to live within its means.

Alvin has a background as a musician and a chef focusing on natural foods. He’s been involved with the opening of Café Agri and was head chef at Ecopolitan.

Another DFLer, Matt Dowgwillo, has entered the race as well. While the Minnesota Independent was unable to get in contact with him, Dowgwillo’s website lists transportation as a key issue, along with property taxes, safety and development. “I am running for City Council because I have the skills, contacts, ability, and drive necessary to create a better, safer, more sustainable community,” Dowgwillo wrote on his website. “My work with over 60 local small business owners, city permit departments, and local non-profits have broadened my understanding for the various issues that arise in any project.”

This is the third in a 13-part series on Minneapolis City Council races to run every Monday and Friday, now through Oct. 16. On Monday, Ward 6.