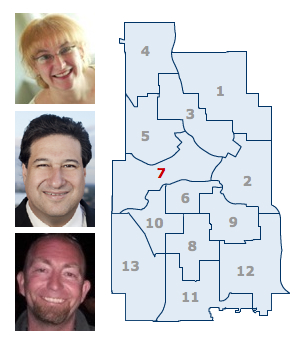 Lisa Goodman would seem to have little to fear in her re-election contest. The three-term Democratic incumbent swamped her opponent with 86 percent of the vote four years ago. That barely topped her tally in 2001, when Goodman won support from 82 percent of voters. In addition, the Ward Seven representative had $116,000 cash on hand at the start of September to wage her re-election battle. That’s three times more than the next largest haul by a council candidate.

But Goodman has also been dogged by a lawsuit filed by developer Bradley Hoyt and his company, Continental Property Group. The suit alleges that the City of Minneapolis, primarily through the actions of Goodman, violated Hoyt’s rights by conspiring to thwart a proposed housing development in the Lowry Hill neighborhood.

“She was clearly involved in an effort not only to assist to organize and mobilize neighborhood opposition to the project, but also to sway the opinions of her fellow council members,” Aldrich wrote. “Such actions were improper and impermissible for the someone acting in a quasi-judicial capacity.”

A hearing to establish what damages the city might be on the hook for is slated for later this month. Hoyt’s lawsuit states that’s he’s seeking $23.6 million in compensation.

The ruling has clouded a re-election campaign that would almost certainly have been a cakewalk. The Ward Seven representative has long held a reputation for throwing sharp elbows at City Hall, and the lawsuit has provided fresh evidence for that characterization.

Goodman won’t talk about the case, citing orders from the city attorney’s office. But she vigorously defends her tenure on the council. She argues that the dire economic situation currently facing the city requires experienced hands at City Hall.

“I believe that stability on the city council during this time of financial uncertainly is really, really important,” she says. “We need people who can offer up solutions short of tax increases, and I am one of those people.”

Ward Seven is dominated by downtown Minneapolis, but also includes the adjoining neighborhoods of Kenwood, Lowry Hill and Bryn Mawr. The district incorporates neighborhoods of extreme wealth and stark poverty. At the time of the 2000 census, the median household income in Kenwood topped $100,000, while the equivalent figure in the ward’s Elliot Park neighborhood was just $18,000.

Goodman serves as chair of the city council’s Community Development committee and cites her work on downtown development issues as a hallmark of her tenure. In particular she’s proud of plans to re-open Hennepin Avenue to two-way traffic and efforts to spur development in the area surrounding the new Minnesota Twins stadium. She repeatedly harps on the need for public-private partnerships in order to bolster business at a time of economic malaise. Goodman also cites renovations of the Kenwood and Lakes of the Isles parkways as proof of her effectiveness.

“It’s one thing to talk about all the fabulous things you can do,” she says. “I have a track record of doing them.”

Goodman has attracted two challengers. Michael Katch is a familiar face to City Hall denizens. In recent years he’s been a ubiquitous presence at city council meetings and committee hearings. It’s not his first foray into electoral politics: In 2006, he challenged state Rep. Willie Dominguez in the DFL primary, losing with 33 percent of the vote. This time he’s running with endorsements from the Republican and Independence parties. In the past, Katch says he’s worked as a trader at the Minneapolis Grain Exchange and as a taxi cab dispatcher.

Katch has a long litany of criticisms regarding the incumbent, starting with the Hoyt lawsuit. He argues that it’s emblematic of Goodman’s penchant for rewarding patrons and punishing those who oppose her agenda.

“Anytime that we have elected officials that are setting their own interests over and above the interests of the community it’s generally a big deal,” he says.

Katch is also upset that Goodman spearheaded an effort to eliminate sandwich-board advertising from downtown, believing it will hurt small businesses that can’t afford more expensive forms of marketing. In addition, he’s disturbed that Goodman supports eliminating the Board of Estimate and Taxation, a decision that will be put before the voters in November. Katch argues that the council needs to return its focus to the nuts-and-bolts of municipal governance.

“Fill potholes, resurface the streets, provide police and fire service,” he says. “It’s not one of those organizations where you’re going to make breathtaking decisions about our morality. You have to do those things that people count on every day to live their lives.”

Goodman’s other challenger, Jeffrey Alan Wagner, doesn’t have a traditional resume for a politician. He works as a baggage handler for Delta Airlines at the airport and runs a video-production company. The Loring Park resident attended his first city council meeting last Friday and says he initially jumped into the race on a lark after drinking too much alcohol on the day of the filing deadline.

“Do you have to be able to spell Minneapolis to be a city council member?” he laughs.

Wagner has not raised any money or sought any political endorsements. But the 42-year old insists he is running a credible campaign and argues that the taint from the Hoyt lawsuit has rendered Goodman unelectable.

“You know what dude? Sometimes you need a lunatic in office,” says Wagner.

At the least he will bring some unique ideas to the contest. Wagner plans to lobby for a 10-percent reduction in city council salaries. If such a cut isn’t adopted, he vows to donate 10 percent of his salary to the nonprofit group Sharing and Caring Hands.

Wagner wants to expand bar operating hours to 4 a.m. in the downtown district. He also intends to keep a keg of beer in his office at all times so that constituents can drop by for a cold one and discuss issues. “I can’t drink all the time, obviously, but they can,” he says.

Goodman says the criticism of her 12-year tenure at City Hall is misguided. The incumbent argues that she simply takes time to educate herself on the views of her constituents and then defends their interests vigorously.

“I have no intention of running for anything else,” she says. “I’m not trying to curry favor with anyone. I’m trying to represent my constituents.”

For instance, Goodman points out that she voted in favor of the smoking ban despite being personally opposed to it.

“Why did I vote for the smoking ban?” she asks. “Because that’s what my constituents wanted. That’s how I approach the job.”

She further argues that the ban on sandwich boards in downtown was a common-sense solution to navigation problems for people with disabilities on the busy corridor. In addition, she argues that abolishing the Board of Estimate and Taxation will lead to more accountable representative government.

“No one knows who their board of estimate representative is,” she says. “They’re not accountable.”

As for that $100,000-plus bank account, Goodman says she’s simply being a prudent politician.

“I don’t think any incumbent should take anything for granted,” she says. “It’s important to get your message out.”

This is the sixth in a 13-part series on Minneapolis City Council races to run every Monday and Friday, now through Oct. 16. On Friday, Ward 13.