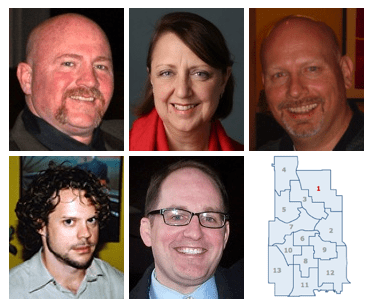 Ward One, in Minneapolis’ northeast corner, has an open city council seat for the first time in a dozen years. It’s a fresh beginning for the ward as voters prepare to rank favorites among five newcomers: a DFL Party endorsee, a DFL challenger and three independents. But a trio of veterans who held the seat going back to the early 1960s — when councilmembers were called assemblymen — still hovers over the race.

Northeast is another of Minneapolis’ DFL strongholds, a tradition-bound home to a variety of European immigrant groups since the 19th century. In recent years an influx of artists and immigrants from other parts of the globe have refreshed the area’s demographics and, more slowly, its politics.

The party’s imprimatur gives Reich a large leg up, but he insists he isn’t coasting. Like the others, he says he’ll be out literature-dropping and door-knocking at in increasing pace through the Nov. 3 general election.

Hanna, an account manager for Qwest, has served as campaign treasurer to Paul Ostrow, the ward’s current DFL council member, who opted against a bid to add a fourth term to a City Hall tenure that included a stint as council president.

Her campaign has the lowest profile online — it’s the only one without a Web site — but boasts a smattering of lawn signs, including, she told the Minnesota Independent, one in front of Ostrow’s house.

But the ward’s all-important lawn-sign war is largely being waged between Reich and Larry Ranallo, a third-generation area restaurateur who launched his campaign late, on the last day to file for office in July.

Both Reich and Ranallo chose a blue-and-gold color scheme for their signs,with Reich’s spelling out his name in strong, serifed letters, suggesting a Romanlike dominance over the ward that he’ll need if he’s to draw a majority of votes and avoid a second round of counting under the city’s new instant-runoff voting (IRV) system.

Ranallo’s signs look a little like he’s running for sheriff, with a Wild West typeface and the word “WANTED” on top. It’s an approach, he says, inspired by Walt Dziedzic, who represented the ward before Ostrow for 22 years and once used the same word on his lawn signs.

Dziedzic is the first person Reich names when asked who he’d look to as a model for holding elective office. He also cites Ostrow and Don Risk, who the ward sent to City Hall in the 1960s.

Risk, however, is serving as treasurer to Ranallo’s campaign, which is also being managed by Heidi Zaworski, a noted Northeast community booster.

Reich, Ranallo and Hanna all trace Northeast roots that extend back decades. Reich grew up near the Holland neighborhood where he has worked as a program manager for eight years. Ranallo has familial ties to three Italian-American families in the hospitality business since the early 1900s. Hanna would like to bring back streetcars on Central Avenue NE like the ones her grandfather drove.

Fox, like Reich, points to his work at the neighborhood level, including service as president of the Audubon Neighborhood Association and on a citywide panel that charted a future for the popular Neighborhood Revitalization Program (NRP).

But unlike Reich, Fox (an independent graphic designer and web developer) is running against the dominant DFL Party — which the NRP serves as a farm system, in his view. Indeed, he stands opposed to party politics, preferring a principled approach based on ideals of equity, advocacy and responsibility.

Alessi bears a striking resemblance to Ranallo and, like Ranallo, works in the restaurant business; he is a manager at the Hard Rock Cafe downtown.

But where Ranallo voices a non-ideological frustration with a drift he sees in city priorities — “I’m just an independent dude standing here,” he recalls telling the city clerk who asked his party affiliation — Alessi used two of the three descriptor words candidates are allotted on the ballot to name a political figure who guides his approach: “Ron Paul conservative.” Taxes and regulations stifle what would otherwise be greater vibrancy in the ward, Alessi says.

The city’s financial straits have constricted what might otherwise be greater diversity in the candidates’ positions. All espouse some version of a back-to-basics approach that would limit tax burden and emphasize essential services, especially public safety.

Hanna’s take is practical: She would be selfish for the ward, she says — a shift from Ostrow’s what’s-best-for-the-city stance.

Reich voices a rapid-fire, almost wonky, community-organizer approach to making the most of the city’s assets in lean times.

And Alessi would loosen the reins of an overly restrictive local government, freeing the private sector to revive the city’s fortunes.

All five carry a traditional Northeast Minneapolis chip on their shoulders, despairing that their sector of the city is under-served and ignored by City Hall, while proudly pointing to a culture that’s both traditional and cutting-edge.

“We have everything but a lake,” says Fox.

This concludes our 13-part series on Minneapolis’ city council elections: