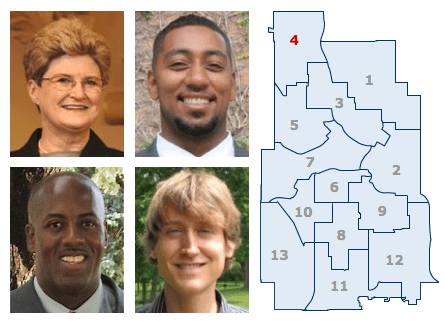 A member of the Rainville family has held Minneapolis’ Ward Four city council seat since the mid-1970s. First elected in 1975, Alice Rainville represented the area for more than two decades, in 1980 becoming the first woman to serve as city council president.

Barb Johnson then took over her mother’s post in 1997. Four years ago she was the only incumbent on the Minneapolis City Council not to attract a single challenger, winning re-election with 92 percent of the vote. This year, however, Johnson faces three challengers for the seat. Her opponents believe it’s time for the Rainville reign in North Minneapolis to end.

“The Fourth Ward has been represented by one family for 40 years, longer than I’ve been alive,” says Marcus Harcus, who is running as a Green Party candidate. “I respect that they’ve stood up and served the community for all these years, but the North Side needs new leadership, new faces, new ideas.”

Troy Parker is also disturbed by the political dynasty established in North Minneapolis. He initially ran (unsuccessfully) against Johnson when she first sought the seat in 1997.

“Her mom was retiring and she was the heir apparent,” Parker recalls. “I just didn’t think that was a democratic way of doing things.”

The scuttlebutt around City Hall is that Johnson is more than a little concerned about the electoral competition. But the city council president insists that a vigorous campaign is welcome.

“It really was a fluke that there was no opposition last time,” she says. “I view competition as a good thing. It makes you sharpen your message and get your information out there.”

Ward Four stretches across the northwest corner of Minneapolis and includes the neighborhoods of Shingle Creek, Folwell and Cleveland. The area encompasses blocks that are blighted by crime and abandoned houses, along with bucolic stretches that could be confused with surrounding suburbs. At the time of the 2000 census, a majority of the residents were non-white.

Grant Cermak, the third candidate challenging the incumbent, is running with the backing of both the Republican and Independence parties. Last year he took on state Rep. Joe Mullery for a seat at the Capitol, but fell well short, with 18 percent of the vote. The software engineer and small-business owner was inspired, in part, to get involved in electoral politics by the presidential campaign of Ron Paul and espouses a libertarian philosophy of municipal governance. He cites Minneapolis’ prohibition of pit bulls and restrictions on idling cars as two areas where the city has overstepped its proper authority.

“I’m very fiscally conservative,” he says. “Other than that, I kind of have a laissez-faire philosophy in terms of trying to legislate morality.”

Cermak also has concerns about civil rights abuses by police officers. He believes that the cops have been repeatedly allowed to overstep their authority without repercussions.

“I think Chief [Tim] Dolan has to go,” he says. “They haven’t been operating in a way that’s been beneficial to the community.”

Harcus is also partially motivated by police behavior. The 31-year-old says he’s been pulled over 52 times by the cops over the years, the overwhelming majority of times for no conceivable reason. In one instance, Harcus says, he was dragged to the ground and beaten with a night stick. His crime: running to catch a bus.

“My experience with police abuse compels me to pay attention to city politics,” he says.

Among the changes Harcus would like to see: subpoena power for the city’s Civilian Police Review Authority, which is charged with investigating citizen complaints against the police department. Harcus argues that Johnson is too closely aligned with the Minneapolis Police Federation and the department brass to make needed changes to police oversight.

“She’s totally biased in favor of the police,” he says. “She believes they can do no wrong.”

Johnson denies this assertion, but believes that criticism of the police is largely misguided. She notes that violent crime is down dramatically and argues that cops who misbehave are being held accountable.

“The police chief has to be vested with the authority to be strong in his discipline of officers who misbehave – and I think that’s in place,” she says. “Our chief has fired more police officers than any other chief. That doesn’t make him the federation’s poster boy.”

It’s not the first time Harcus has sought elected office. He ran for mayor in each of the last two election cycles, but garnered less than one percent of the vote in each contest. However, he insists that this election will be different.

“This time around I’m in it to win it,” he says. “The previous two times I was just running to make some noise.”

The proof of his intent: Harcus has been door-knocking in the ward since April. He estimates that he’s surveyed 800 residents about their beliefs and concerns.

Parker sought the DFL endorsement, but lost out to Johnson. He touts economic development on the North Side as a chief concern. In particular he wants to see more business growth on main corridors such as West Broadway and Lyndale avenues. Parker argues that Ward Four hasn’t gotten its fair share of tax dollars in recent years.

“The development dollars just haven’t been dispersed equally throughout the city of Minneapolis,” says Parker, who works as a pipefitter. “We can’t just lie down and allow people to take advantage of our community and our residents.”

He also believes that Johnson has failed to vigorously advocate for residents of the ward. “They just feel as though they have no representation whatsoever,” he says. “You have to give a voice to everyone in the community.”

Johnson rejects criticism that she’s out of touch with the ward and not a strong voice for her constituents at City Hall. “My roots are in that community,” she says. “I’ve lived there my whole life. I have connections all across the community, which none of the other candidates can even get near.”

This is the eleventh in a 13-part series on Minneapolis City Council races to run every Monday and Friday, now through Oct. 16. On Monday, Ward 12.