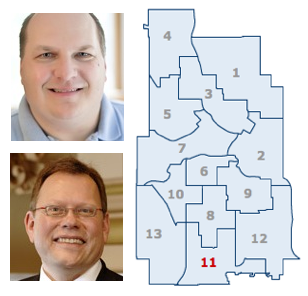 With the announcement that two-term City Council member Scott Benson would be retiring later this year, Minneapolis’ southernmost ward became one of only three in the city to have open seats. Three candidates – two DFLers and one Republican – are vying to represent Ward Eleven, which encompasses much of the Diamond Lake area.

“Given that Scott Benson was not seeking re-election, I saw the opportunity to offer my experiences and skills to the process,” said John Quincy, the DFL’s endorsed candidate for the seat. “I am excited to work in collaboration with other city, county, metro-area and state officials, as well as community organizations to creatively make Minneapolis a safer, sustainable and more livable city for everyone.”

Quincy says the ward and the city face tough times. “There are a number of ongoing challenges that we are all facing, driven I am afraid by tight economics and limited resources,” he said. “I am interested in maintaining our quality of life in Ward 11 – including safe neighborhoods, great parks, schools and transportation options.”

He said that airport noise is a big issue for residents and that he hopes to work closely with the Minnesota Department of Transportation as several large-scale transportation projects, such as the Crosstown Commons and adding a lane to 35W, continue in the ward.

Quincy also speaks strongly about social justice. “As a married white male, I recognize the privilege I hold in this system. I will continue to be a strong advocate for racial and economic justice,” he says on his campaign website. “From the families who have fallen victim to predatory lending, to the families which do not have equal access to rights and responsibilities of my own, I will take a strong stance and hold firm in my belief in equity for all.”

His campaign is also working to educate residents about the new Instant Runoff Voting system (also known as Ranked Choice Voting) that’ll be used for the first time in November’s election. “My campaign has embraced the IRV/RCV as an opportunity to reach out and educate residents on what to expect,” he said. “Change is hard for many of us, but being prepared and engaged is how we are addressing the reality of a different system.”

Quincy won the DFL endorsement handily in April with more than 90 percent of the vote on the first ballot.

In that ballot, he beat out Gregg Iverson, who only garnered a handful of votes but remains in the race for the Ward 11 seat.

Iverson’s priorities if elected include reducing taxes, which he says can be reduced by more careful spending, and he says environmental concerns and housing issues “will have my constant, watchful eye.”

He’ll also be watching the Minneapolis Police Department. “Police must be better trained to avoid lawsuits stemming from excessive use of force,” he said.

In 2005, Iverson ran against council member Benson, who up until then was unopposed. He sees the role of city councilor as a logical progression in his political career.

He added, “Now I am retired and can give full time service to the City of Minneapolis.”

Not a fan of Instant Runoff Voting, he said, “If you liked the Franken/Coleman [recount] you will love IRV.”

Another candidate in the race is David Alvarado, a Minneapolis cab driver. “I see a lot of things in this city that other people don’t” while driving a cab. “I’m just a concerned citizen,” he said about running for the seat. “I want to make a difference. I want to make a change in the city.”

He running as an unendorsed Republican, but he says “I’m running as a conservative first, a for the people second and for the party third.” And added that the DFL party has held dominance in the city for too long.

“We don’t need an outside entity running the city’s parks,” he said of Three Rivers Park district. He favors local control over the city’s park board. Alvarado also says he opposes any attempt to regulate trans fats in the city saying it is detrimental to the restaurant and food service industry. “We also need to keep property taxes lower and get the nanny state out of people’s pockets.”

In the money race, neither Alvarado nor Iverson submitted pre-primary reports. Quincy has raised $10,210 during this campaign cycle.

Of the campaigns, only Quincy has a web presence, though Alvarado says a website for his campaign will be launching in the next few weeks.

This is the ninth in a 13-part series on Minneapolis City Council races to run every Monday and Friday, now through Oct. 16. On Monday, Ward 11.