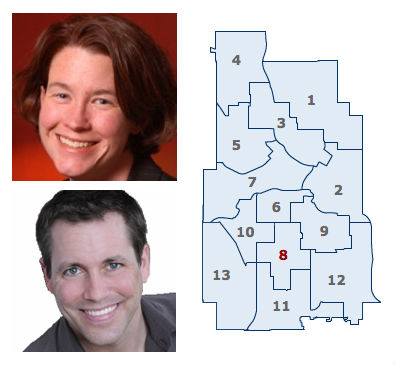 In 2005, the Ward Eight city council race was arguably the most hotly contested in Minneapolis. The primary featured 10 candidates — more than any other ward in the city. The principal reason for this electoral scrum: there was no incumbent candidate. A controversial redistricting plan had lumped council member Robert Lilligren into Ward Six with fellow incumbent Dean Zimmerman.

In the end, Marie Hauser and Elizabeth Glidden emerged from the crowded field to advance to the general election. Glidden, a civil rights attorney, then won the seat handily with 59 percent of the vote.

This year’s Ward Eight contest is slightly less crowded, but there are still five candidates running for the post. Glidden is seeking a second term, while challengers Gregory McDonald, David Regan, Jeanine Estime and Michael Cavlan are looking to oust her from the council.

There will be no primary election this time around, however, because Minneapolis is using instant-runoff voting for the first time, in which voters will rank their preferred choice of candidates. The change seems to have spurred many to take a shot at electoral politics. There are currently 53 candidates across the city running for the 13 city council posts.

“I think this gives more people an opportunity to have a say in the election,” says Glidden. “We know that you have dismal turnout at the primary. That’s where you’d often see this big lineup of candidates.”

Ward Eight is among the city’s most diverse, both economically and ethnically. It stretches from Lake to 50th streets and from Cedar to Lyndale avenues. At the time of the 2000 census, more than half of the residents were minorities. The median household income in the Central neighborhood was just over $32,000, while in Kingfield that figure was nearly $52,000.

In the ’80s and ’90s some parts of the ward, most notably Central, were notorious for gang violence and crime. But many residents believe that over the last decade the area has made significant strides in restoring calm to the streets. This success, however, has left some grumbling that Ward Eight doesn’t get its fair share of resources from City Hall.

“The relative peace we have over here compared to the north side is a very, very hard fought battle that’s being waged every day,” says Steve Washington, a juvenile probation officer and 15-year resident of the Central neighborhood.

“We’re quiet over here for a reason. It’s because we work at it. Yet we lose funding. The city pumps money into the dysfunction of the north side.”

Ward Eight certainly continues to have its share of problems. The area is among the hardest hit in the city by the foreclosure crisis. Through July of this year, 156 homes had gone into foreclosure. That’s the third highest total in the city, ranking behind only the wards on the city’s beleaguered north side. The plight of homeowners trying to stay in their residences has been highlighted in recent months by Ward Eight resident Rosemary Williams, who has refused to leave her home of nearly three decades even after being ordered to vacate the premises by Hennepin County Sheriff’s deputies.

Glidden says the resulting abandoned properties littered throughout the ward are adversely affecting the quality of life for the remaining residents. She’s working to secure funds to help revitalize distressed properties and get them occupied once again.

Crime remains the most significant issue for many Ward Eight residents. McDonald says its the primary reason he’s running for city council as an Independence Party candidate. “My 12-year-old son won’t walk to the store by himself,” he says.

McDonald wants the city to beef up inspections and target neglectful property owners. “They aren’t penalizing negligent landlords enough,” he says. “The police, every officer I speak with, their hands are tied.”

He argues that Glidden, a Kingfield resident, is out of touch with the concerns of poor residents in the area. “She lives in an upper middle-class Minneapolis neighborhood,” he says. “She comes from a completely different background from the majority of the people in Ward Eight.”

Cavlan has a different perspective: He believes cops are a large part of the problem. The registered nurse says he was motivated to run for city council in part by the heavy-handed security tactics during last year’s Republican National Convention and civil rights abuses by Minneapolis police officers. He wants a beefed-up civilian-review board to oversee the conduct of cops and believes that chief Tim Dolan should be fired.

“Chief Dolan has set a tone with the Minneapolis police where there is no accountability,” he says “There are sections of Minneapolis where the people are either afraid of the police or getting very angry with the police. We’re headed towards a confrontation in this city if we don’t get these people under control.”

Cavlan is a former Green Party activist, but grew frustrated with the party’s inability to present a credible alternative to the Democrats and Republicans. He’s now running as an Open Progressive and will be the first candidate representing the fledgling party to appear on the ballot. Despite this lack of electoral history, Cavlan believes that Minneapolis’ new ranked-voting system gives him an opportunity to win.

“I really do believe that instant-runoff voting is going to change everything,” he says. “Those of us who have these views and opinions are no longer marginalized.”

The motivations of other candidates on the ballot are tougher to surmise.

Regan registered to run as a Republican, but ascertaining much more information about him is difficult. The phone number filed with the city’s elections office is disconnected and he doesn’t appear to have a Web site.

Jeanine Estime is running as a Green Party candidate. The Haitian-born Powderhorn Park resident has lived in Minneapolis for more than 15 years. She works as an education assistant at her daughter’s school and has volunteered with the Powderhorn Youth Farm and Tubman Family Alliance. Estime’s web site describes her as “strong, visible, progressive.”

Glidden says criticism that she is out of touch with the ward’s poorer residents or unwilling to take action on thorny issues is unfounded.

“I have been a very hands-on person in working with neighborhoods and block clubs on crime and safety issues,” she says. “I have not just been someone who works on the big-picture policies.”

Washington, who previously chaired the Central neighborhood’s Weed & Seed anti-crime initiative, backs up Glidden. He notes that when a tornado recently ripped through part of Ward Eight, the city council member was immediately out on the streets assessing the needs of her constituents.

“Elizabeth gets on the ground and she makes relationships with people and she gets the job done,” Washington says. “Until Glidden does something extremely strange she’s earned the job.”

This is the first in a 13-part series on Minneapolis City Council races to run every Monday and Friday, now through Oct. 16. On Monday, Ward 9.