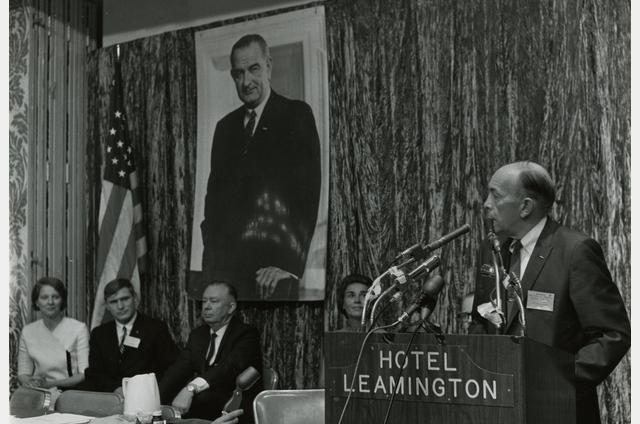 “It will not be a short or easy struggle, no single weapon or strategy will suffice, but we shall not rest until that war is won.”

The year is 1964 and President Johnson is talking not about the war in Vietnam, but about an “unconditional war on poverty in America.”

Today, that Southeast Asian conflict is long past, but the call to arms to fight poverty continues. Five decades later, critics say the war against poverty has failed, while others argue that government programs such as unemployment insurance and food stamps have helped millions of families get by and staved off higher poverty levels during the Great Recession. Speakers will review and evaluate the War on Poverty at a conference Thursday in St. Paul called a “Minnesota Poverty Call to Action.” The event is hosted by Minnesota Community Action Partnership and is open to the public.

Have the lives of the poor in Minnesota improved since LBJ declared war on poverty? And how many still need help?

To help answer those questions, MinnPost asked state demographer Susan Brower to compare poverty numbers from 1960, the closest U.S. Census data collection to LBJ’s declaration of war, to Minnesota’s most recent statistics from 2010-2012.

“We see how far we’ve come,’’ said Brower after reviewing the data.

No question, there has been significant progress in reducing poverty in Minnesota. Across the state, the poverty rate overall is 11 percent — almost half what it was in 1960 at 21 percent. (The poverty level in the United States is 15 percent, down from 19 percent in 1960.)

Further, the Minnesota stats show poverty in a variety of demographic categories — from age to race to geographic location — is way down from 50 years ago. (The federal government defines poverty according to annual cash income and family size. For a family of four in 2014 the poverty level is $23,850.)

One of the biggest beneficiaries of five decades of government programs has been the 65-and-older group: poverty among older Minnesotans dropped from 39 percent to 8 percent.

Poverty declined for all age groups between 1960 and 2012, but declined most dramatically for Minnesotans 65 and older. 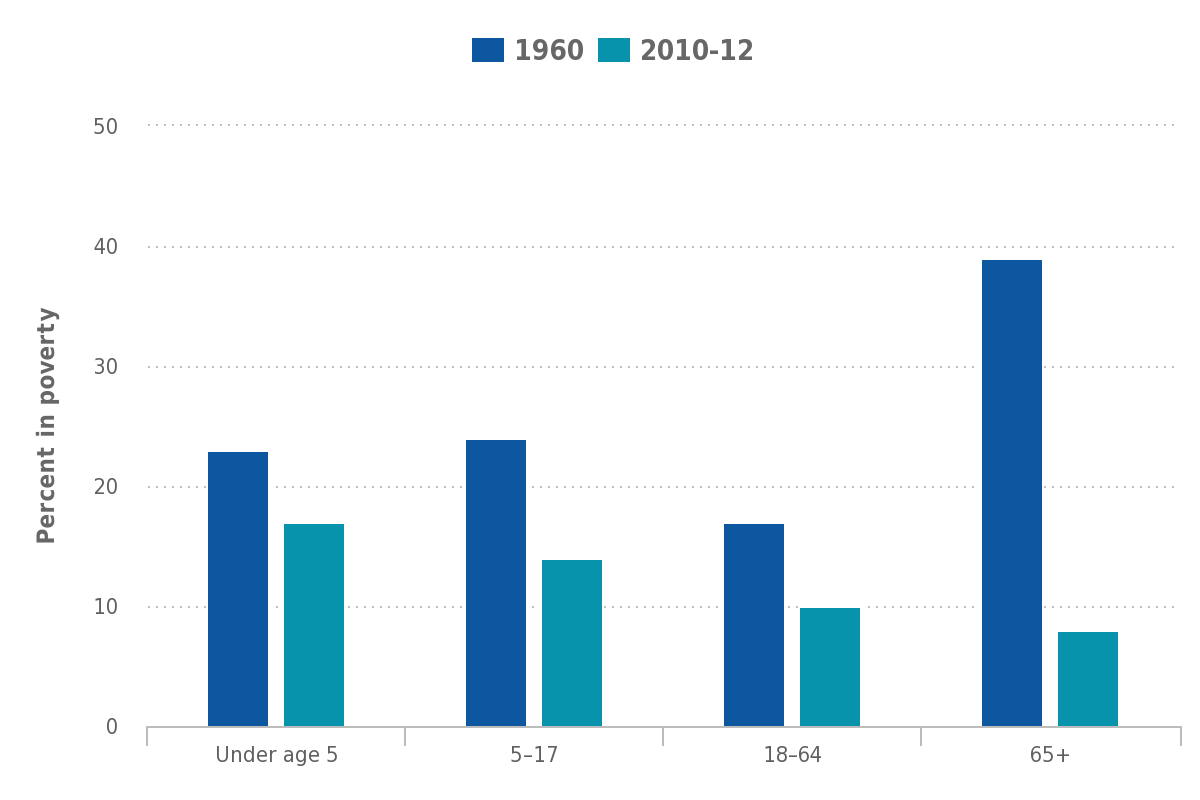 Break the numbers down by race and ethnicity and you’ll see poverty among all persons of color today is still a startling 28 percent, but down from an unconscionable 43 percent in 1960, though there were many fewer persons of color living in Minnesota in 1960 than today. For whites in Minnesota today, the poverty level is 8 percent; in 1960, it was 21 percent.

Among various racial and ethnic categories, the results are more mixed. Poverty in Minnesota’s Asian community has declined, for example, but among non-Hispanic blacks in the state, that number has risen — from 31 percent in 1960 to 39 percent today.

“Part of the increase in poverty we see among African Americans or Blacks can be attributed to compositional changes within that group,” Brower explained in an email. “The African American/Black population in Minnesota has grown significantly, especially since 1990. Much of that growth can be attributed to immigrant refugees, many coming from East Africa where opportunities for schooling were few. We now see very high rates of poverty for many newer African-born populations. Over the same time, U.S.-born African Americans in Minnesota have had persistently high rates of poverty over the decades, and this is also a factor in the overall increase in poverty for this group.

“When we look at other racial groups, we see compositional and historical changes that have pushed the poverty rate in the other direction. Among Asian Minnesotans, for example, there has been a large increase in immigration from India. Indian immigrants tend to come to Minnesota already very highly educated, coming to the U.S. specifically to fill high-paying jobs. U.S.-born Asian refugee populations that have now been in Minnesota for generations have also been able to gain some economic foothold, which has slowed the rate of poverty for this group.”

Although poverty declined for people of color overall, it has actually increased for non-Hispanic blacks. 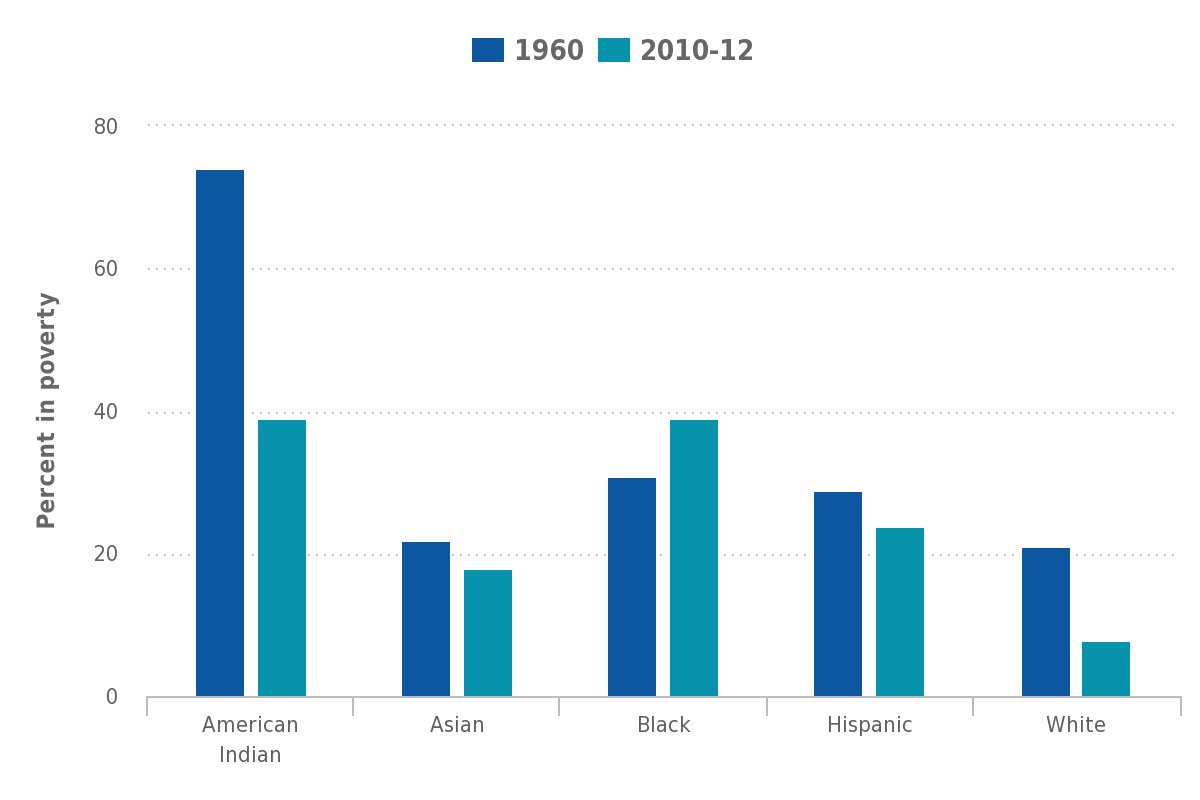 Poverty in Minnesota’s rural areas has also declined since the War on Poverty was declared. Some 27 percent of people in greater Minnesota lived in poverty in 1960, and today it’s dropped to 12 percent. (The poverty rate for the seven-country metro area has remained steady over the years: 10 percent in 1960 and 11 percent today.)

The dividing line between the well-off and the poor in the Twin Cities metro is largely along racial lines, but advocates for the poor say the dividing line in rural areas is increasingly age.

Poverty in rural Minnesota has declined, but experts worry that the new urban-rural divide falls along age lines, with rural seniors increasingly in poverty. 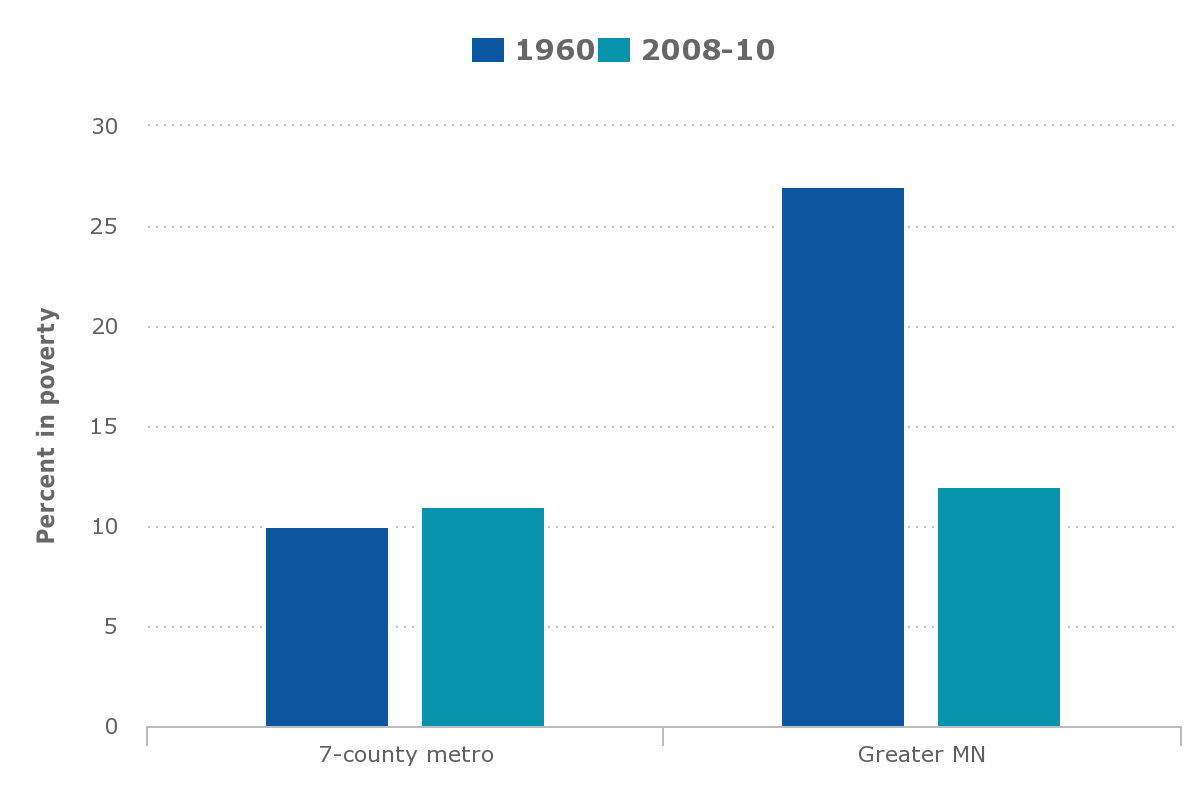 (Despite her best efforts, Brower said her office could only uncover the 65-and-older poverty rates in rural areas for the 2010-2012 period: Poverty among older Minnesotans in rural parts of the state is at 9 percent, compared to 7 percent of seniors living in the metro. “Our usual sources for historical census data don’t contain this breakdown for 1960 at the county level,” she said.)

Officials who work with the poor in greater Minnesota see trouble ahead. “People often say the best cure for poverty is a job, but are you going to send Grandpa back to work? We’re aging at an accelerated rate,’’ said Bob Benes, who heads up the Lakes and Pines Community Action Council. The council serves Pine, Mille Lacs, Aitkin and Kanabec counties, which measure some of the highest poverty rates in the state.

Benes said the spike this winter in the cost of propane gas used for home heating demonstrated just how vulnerable low-income seniors in his area were as they tried to pay regular bills and skyrocketing fuel costs.

“People were coming in to take out loans to fill their propane tanks, or worse, putting it on their credit cards and paying 18 percent [interest],” he said. (Because of the sharp rise, the state expanded its fuel assistance program this winter.)

Benes said older people, still struggling to recover from the Great Recession, are selling off property to survive.

Energy assistance and food support programs, access to health care, public transportation and wider Internet access are all important in the fight against poverty, he said.

Officials report poverty has also settled in the suburbs. In suburban Hennepin County there a rapidly growing need for help, said Scott Zemke, director of program operations for the Community Action Partnership of Suburban Hennepin. One example he pointed to is the rise in applications to the Energy Assistance Program in Hennepin County. At the height of the recession in 2008-2009, that number was 13,000; this year it jumped to 15,000.

Over the past five to 10 years, Zemke has seen suburban homeowners “aging in place’’ as they retire but living on much smaller incomes — Social Security and sometimes pensions — because retirement savings were wiped out by the recession.

The recession left others paying home mortgages on salaries 50 percent to 60 percent of they had been before the economic crisis, Zemke said. “The recession has brought on a new wave of poverty,’’ he said.

Despite continued pockets of high levels of poverty in Minnesota, the War on Poverty can claim many success stories in the state, like that of Liane Heupel, 68, who lives with husband, Ken, on a farm north of Ogilvie.

When we talked, Heupel painted a life story of poor times and good, starting in the 1980s, from trying unsuccessfully to scratch out a living from farming to achieving economic stability, all the while dealing with emotional problems in the family and her poor eyesight. Legally blind, Heupel uses special glasses and reads from a computer screen with enlarged type.

She considers anti-poverty programs a necessary stop-gap to help struggling people. “I’ve always viewed these things — for the years we didn’t have much to live on — as being something temporary, as something that people have access to when times are tough, but hopefully they can get past it and be self-supporting,’’ she said.

“We did not get the cash and the food stamps,’’ she said, though the Heupel family qualified and took advantage of Head Start programs for their three daughters. They qualified for government fuel assistance and weatherization programs, which were “a real life saver,’’ she said, but never sought food assistance.

Heupel eventually found a good job as an employment specialist for Kanabec County, where 13.1 percent of people now live below the federal poverty line.

Heupel, now retired and a board member of the Lakes and Pines Community Action Council, an anti-poverty and assistance agency, added: “We’re pretty comfortable now, but it’s been a long road.’’

And as state demographer Brower said, poverty numbers over the past 50 years — and life stories like Heupel’s — show how far Minnesota’s come in the war on poverty.

State Demographer Susan Brower compiled a number of statistics comparing poverty in Minnesota in 1960 and today. Explore the data in the table below.